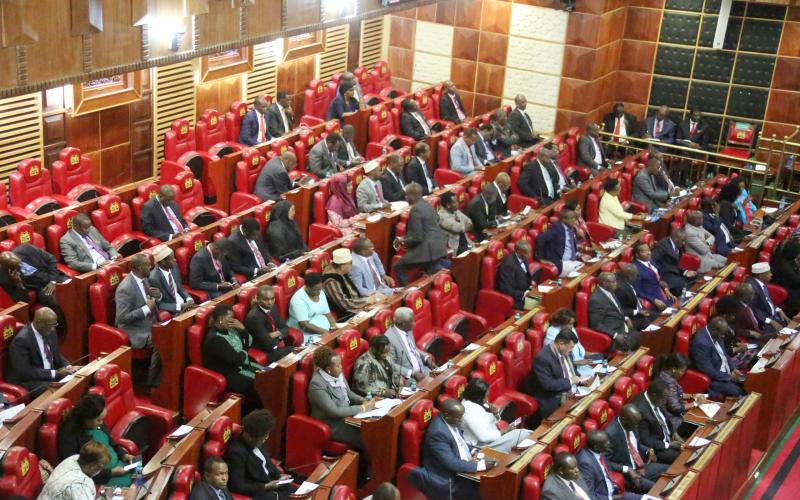 Last week, MPs convened a sitting to mourn the late Matungu MP Justus Murunga who passed away due to COVID-19 complications while on his way to the St. Mary’s hospital in Mumias.

Shortly after, Kwanza MP Ferdinand Wanyonyi remarked, “We are requesting and I have managed to talk to the Clerk of the National Assembly about this that we should be given a hotline number to helicopter services just in case”.

Article 95 of the Constitution sets out the Role of the National Assembly as representing the people of the constituencies and their special interests and deliberating on and resolving issues of concern to the people and determining allocation revenue to this end. The pandemic and public health, in general, is an issue of concern to the common mwananchi. At no point was this raised during the sitting by the MPs.

In Kenya, politics is about posturing and image. Some party leaders, governors, senators, MPs as well as aspiring politicians recently acquired some of the latest models of helicopters and the rest want to follow suit. It is safe to say that Kenyan politicians have completely absconded their duties and are oblivious to the worries and concerns of the electorate.

The political gatherings witnessed in different parts of the country have one thing in common; the leaders and many of their supporters don’t wear face masks and social distancing guidelines remain ignored.

In the middle of arguably the worst health and economic disaster of our generation, the Minister of Health’s idea of implementation of guidelines is that of the archetypal high school headmaster, a disciplinarian approach of scolding and admonishing.

Currently, well over 2,352 healthcare workers in Kenya have tested positive -- 1,177 male and 1,175 female. Out of these, 30 have already succumbed to Covid-19 complications, 12 of them being specialists in various fields of medicine. Medics have already issued a strike notice expiring on December 6 in response to the lackadaisical attitude of the government towards their needs.

Clinicians followed suit and gave the government 14 days to provide them with personal protective equipment (PPE) and a medical cover failing which they will withdraw their services. The situation looks increasingly grim.

Doctors and other medics are already looking for greener pasture in developed countries, and Kenya doesn’t have enough medics to be losing them in this manner. The cost of health professionals' brain drain in Kenya is staggering, including educational costs and the lost returns from investment. If the current trend of poaching of health professionals from Kenya is not curtailed, the chances of achieving the Millennium Development Goals would remain bleak.

The vicious cycle does not spare anyone, as the late Matungu MP and his fellow lawmakers and their families already had access to medical insurance worth over Sh10 million, including emergency air evacuation. Time and time again, the brutal fact that we cannot implement private solutions for public problems becomes increasingly clear.

The rise in the number of COVID-19 cases in the second half of the year, or the second wave, can be blamed on politicians. BBI rallies held based on the implementation of a document that would cost taxpayers a massive Sh14 billion, have been superspreader events.

The cost of the whole project could have been used to alleviate issues facing Kenyans this year such as floods, a desert locust upsurge, economic challenges, and the socio-economic consequences of the COVID-19 pandemic; but the so-called representatives of the people did not have the people in mind.

The controversial document, which has been opposed by many as non-essential and of little benefit to Kenyans, is also seemingly being forced down our throats. Last week, one of its proponents, Rarieda legislator Otiende Amollo, took to social media and wrote, “#Handshake.., For Those That Oppose The Handshake & It’s Product BBI, Pls Take Note Of The Happenings In Ethiopia, Uganda, Tanzania, S. Sudan & Somalia, & Ask Yourself Whether You Want Us To Go That Direction.., Knowing Kenya Can “Better These... “Reflect!...”. A statement that can be interpreted as a threat in case of non-conformity.

It has become increasingly clear that our politicians have taken a Marie Antoinette stance, the former 18th century French Queen, who in addition to her renowned extravagance, was unable to comprehend the French people's thirst for democracy—and responded to news that starving Parisians had no bread by saying: "Let them eat cake."

We are burdened with a political class whose disdain for the less fortunate in society had them unleash the brutal police force on them, beating and killing them. Kenya has massive potential, but this can only be unleashed if we make the right decisions at the ballot.