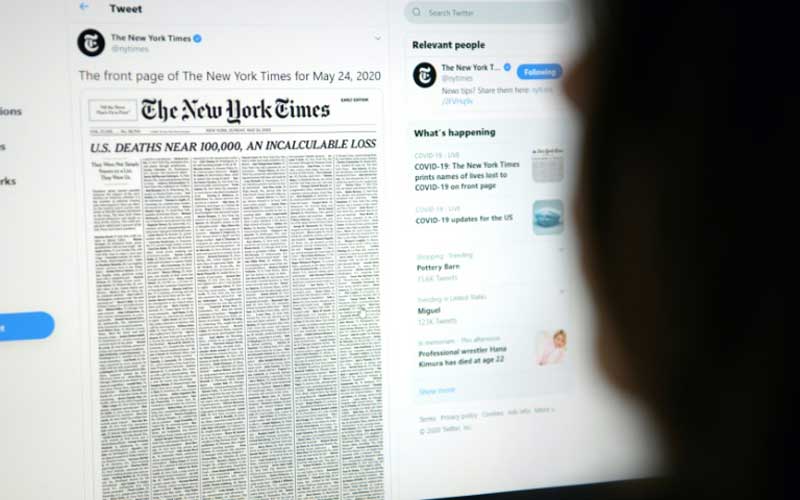 As the United States approached 100,000 coronavirus deaths, The New York Times on Sunday marked the grim milestone with a stark memorial on its front page -- one-line obituaries for 1,000 victims. "The 1,000 people here reflect just one percent of the toll. None were mere numbers," the newspaper said in a short introduction on the front page, which was entirely covered in text. The United States has been the hardest-hit country in the coronavirus pandemic by far, in deaths and number of infections.

As of Saturday evening, the US had recorded 97,048 deaths and 1.6 million cases of the virus, and will likely reach 100,000 fatalities in a matter of days. Victims featured by the Times included "Joe Diffie, 62, Nashville, Grammy-winning country music star," and "Lila A. Fenwick, 87, New York City, first black woman to graduate from Harvard Law School." Also: "Myles Coker, 69, New York City, freed from life in prison," "Ruth Skapinok, 85, Roseville, Calif., backyard birds were known to eat from her hand," and "Jordan Driver Haynes, 27, Cedar Rapids, Iowa, generous young man with a delightful grin." Marc Lacey, the paper's national editor, said, "I wanted something that people would look back on in 100 years to understand the toll of what we're living through." The milestone of 100,000 deaths loomed as US states across the country ease lockdown measures.

President Donald Trump, with an eye on his re-election prospects in November, has pressed for a further reopening of the country as job losses mount and the economy slows from coronavirus shutdowns. "TRANSITION TO GREATNESS," Trump tweeted Saturday evening, his slogan for the reopening of America. But many online commentators noted the dissonance between the staggering death toll and Trump's tweet. George Conway, a frequent critic of Trump and husband of White House counselor Kellyanne Conway, tweeted a the newspaper front page -- alongside a photo of Trump playing golf on Saturday.