Eastleigh, Old Town partially locked down as Covid-19 cases in Kenya surge to 582 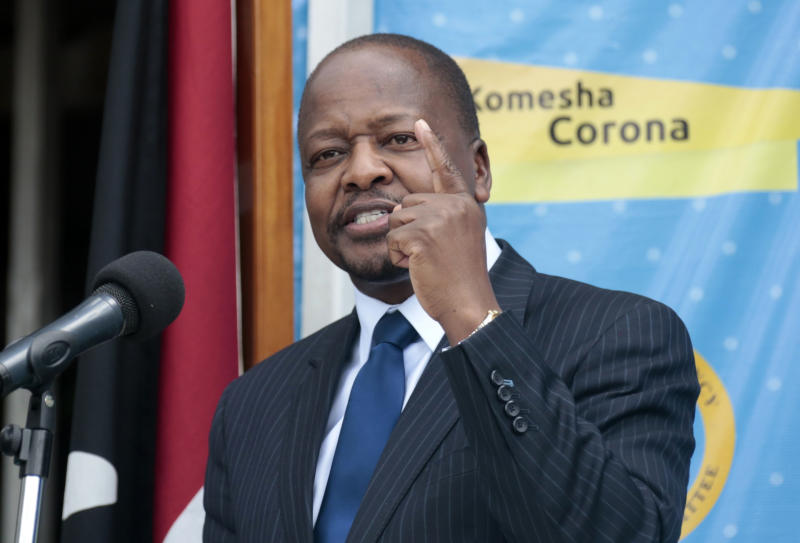 The Government has snapped cessation of movement order into and out of two urban sections as Coronavirus cases in the country rise to 582 after 47 new cases were confirmed in the past 24 hours. The order takes effect today from 7pm for the next 15 days.  Public transportation in and out of the two neighbourhoods cum-commercial centres has also been prohibited. The two sections, Nairobi’s bustling Eastleigh and Mombasa’s Old Town, have been mapped out as high-risk areas in the country.

Speaking at Afya House, Nairobi on Wednesday, Health CS Mutahi Kagwe (pictured) said the containment order was made in conjunction with the Interior Ministry and followed the increase in the number of cases in the two areas. “It will be difficult but again we must protect Kenyans. If we adhere to the containment measures we will defeat the virus,” he said. The CS also ordered for the closure of markets and eateries in the two areas for the next 15 days even with testing being scaled up. Kagwe urged Kenyans to turn out and test in large numbers since they will no longer bear the costs of testing in government facilities. “The cost of targeted testing for Covid-19 and government quarantine facilities shall be met by the government effective today. Kenyans should not be afraid to get tested,” he said.

Nairobi and Mombasa continued to bear the Covid-19 brunt with most cases being recorded in the two counties. Of the 47 new cases, 32 were from Mombasa, 11 from Nairobi, two from Busia and one each in Kiambu and Kwale. The number of fatalities in the past 24 hours also rose to 26 after two more patients succumbed to the respiratory disease. The two died at their home in Mombasa. Transport CS James Macharia announced new rules that require transit truck drivers to get tested every 14 days and produce Covid-free certificates in order to be allowed to deliver or collect cargo in the port of Mombasa,  Nairobi and Mombasa inland container depots. The drivers will also have to produce such certificates before leaving or entering Kenya from neighbouring countries.

Mr Macharia also announced that the workforce at the port of Mombasa would be reduced from 6200 to 4000 to contain the spread of the pandemic while 40 more containers had been added to Nairobi commuter trains to facilitate social distancing. Coronavirus cases worldwide The number of Covid-19 cases worldwide has exceeded 3.67 million, with the global death toll rising to 256,928, according to the Worldometer tally. In the United States of America, there are over 1.2 million confirmed cases so far and more than 72,000 Covid-19 related deaths. The country currently has the highest infection and fatality cases in the world. The UK, on the other hand, has the world's second-highest death toll of 29,427 overtaking Italy’s to become the highest in Europe. Italy’s death toll stands at 29,315 as of May 6. In China, where the disease first emerged, the death toll remained unchanged at 4,633 with only two new cases being reported. The country’s total cases tally now stands at 82,883. The country has made major strides in the fight against the outbreak and is slowly easing restrictions in a bid to return to normal life.