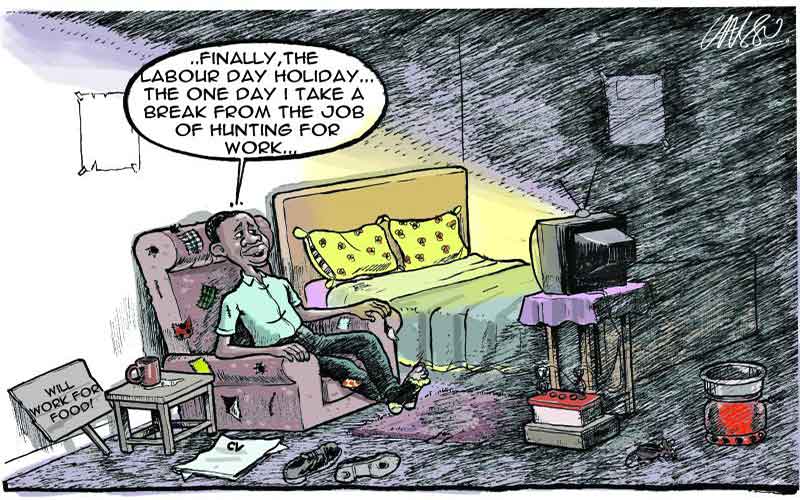 Kenya joins the rest of the world today to mark Labour Day. But as we observe this day set aside to mark the achievements of workers, there is little, both locally and internationally, to celebrate. There will be no song and dance at Uhuru Park. There will be no elegant displays, and neither will Cotu Secretary General Francis Atwoli address thousands of workers countrywide as he does every year. And poignantly, there will be no pay increase for workers. It will be a gloomy day for the workers in lockdown in various parts of the world; some are down with Covid-19 in hospital or at home, while others are in quarantine, waiting for their fates to be determined. Some, sadly, have lost their lives to this invisible enemy.

SEE ALSO: Nations should now brace for 'great reset' in this corona era

And that's not all. Some of the workers who have escaped these tribulations so far have been sacked or suspended. Millions of others who are lucky enough to still draw a salary have seen their wages slashed by huge margins as companies struggle to stay afloat. The coronavirus disease has turned the global economy upside down, and the world of work has not been spared. This week, the Ministry of Labour and Social Protection revealed that 133,657 Kenyans in the formal sector had been rendered jobless as a result of Covid-19. There are tens of thousands of other Kenyans whose livelihoods have been dealt a massive blow. In the US, more than 26 million people have filed for unemployment benefits in the last five weeks. Across the world, people are losing their jobs on a daily basis as the coronavirus outbreak digs in. The International Labour Organisation (ILO) has warned that up to 1.6 billion people employed in the informal economy – nearly half the global workforce – are at risk of losing their jobs.

“For millions of workers, no income means no food, no security and no future”, ILO Director General Guy Ryder noted aptly. The world is navigating uncharted waters. But trouble for the Kenyan worker set in long before the hydra-headed monster docked on our shores. Months before the coronavirus struck, scores of companies had already sent home hundreds of workers due to dwindling economic fortunes. In fact, this week, Kenya National Bureau of Statistics (KNBS) released the Economic Survey 2020 which showed that our economy grew by 5.4 per cent last year, a deceleration from 6.3 per cent in 2018. Matters will be more complicated this year with Covid-19 in the mix. The destruction caused by the coronavirus on the economy could for the first time in decades result in negative growth for the economy, or recession, killing whatever hopes of a revival that the country’s already fledgling economy harboured. Already several companies in the hospitality and aviation sectors have let go of thousands of workers. Other companies have simply shut down. Thus, for the remaining months of the year, the cost of food, fuel, school fees and rent may prove too heavy of a burden to bear for many. To put this into context, prior to 2020, the country’s worst year was 1992 when the economy contracted by 0.8 per cent.

SEE ALSO: The state of the economy

The World Bank expects the economy to grow at a slower rate of 1.5 per cent, and in the worst-case-scenario to plunge into a recession. The International Monetary Fund (IMF) projects an even slower growth of one per cent, while the National Treasury targets a more optimistic growth of 2.8 per cent. But whatever the case, the focus should be on the post-Covid-19 period. The pandemic is redefining jobs and making it clear that the future of work has changed fundamentally. We must rise to the challenge through innovation and creativity. And despite painting a grim picture for 2020, most reputable institutions are upbeat about next year. Both the World Bank and IMF tip the economy to bounce back in 2021, largely due to favourable weather conditions and resurgent investor confidence. But it will also depend on how the government peels back the stringent containment measures, including the countrywide dusk-to-dawn curfew and partial lockdowns, which have crippled a lot of economic activities. For that to happen, however, we must all join hands to banish the coronavirus nightmare. This means observing the rules laid down by the Health ministry. How we behave now will determine how fast we get our economy back on track, and hence recover lost jobs or reimagine new ones.

Keep learners out of mischief until schools reopen

Keep learners out of mischief until schools reopen