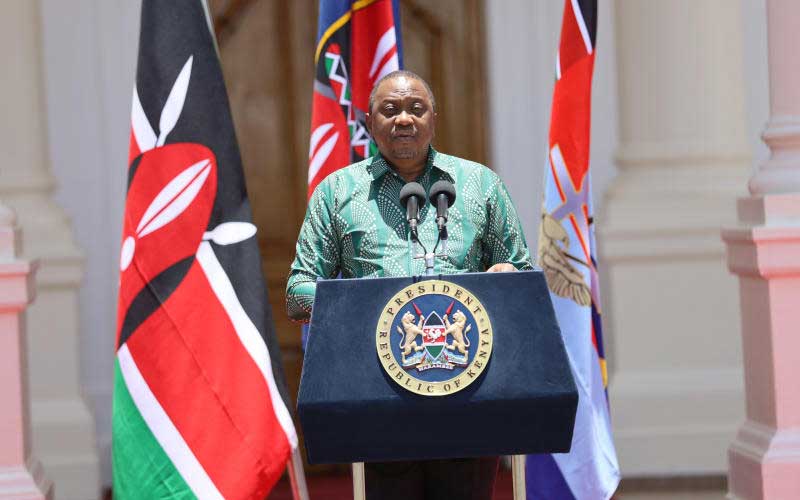 President Uhuru Kenyatta (pictured) has announced a welcome stimulus package to address the impact of coronavirus on the economy.

He has directed the National Treasury to offer a 100 per cent tax relief for individuals with a gross income of up to Sh24,000.

The relief will be effective next month subject to approval by Parliament.

This is as income tax, commonly known as Pay as You Earn (PAYE), has been reduced from 30 per cent to 25 per cent.

Uhuru further announced a reduction of the resident income tax by the same margin from 30 to 25 per cent.

The turnover tax has been reduced from 3 to 1 per cent.

The National Treasury was also ordered to reduce the Value Added Tax from 16 per cent to 14 per cent.

President Uhuru said his administration will continue to make such target state interventions to cushion ever Kenyan from the shocks arising from coronavirus.

“I recognise the anxiety that this pandemic has caused millions of Kenyan families; fearful of what the future may hold for them and their children. And the possibility of job losses and loss of income weighing heavily on their minds,” he said.

Orphans, the elderly and other vulnerable members of the society will enjoy a Sh10 billion cash-transfer by the Ministry of Labour and Social Protection to cushion them from the effects of the pandemic.

The relief also extends to borrowers as the president ordered for the suspension of the listing of loan defaulters at the Credit Reference Bureaus (CRB) effective April 1.

This will apply to any person, Micro, Small and Medium Enterprises (MSMES) or corporate entities.

The tax cuts add to measures already announced by the Central Bank of Kenya (CBK) to cushion the economy from a collapse.

Already, CBK has allowed the Cash Reserve Ratio to 4.25 per cent from 5.25 percent, a move that will provide additional liquidity of Sh35 billion to commercial banks to directly support borrowers.

The CBK lending rate has also dropped to 7.25 per cent from 8.25 per cent meaning loans advanced to borrowers will soon attract reduced interest rates.

The President also announced that the National Executive will voluntary take pay cuts during the duration of the global crisis starting immediately.

President Uhuru Kenyatta and his deputy William Ruto will take 80 per cent pay cut while cabinet secretaries will take home 30 per cent less their salaries.

“I call on the other arms of Government and tiers of Government to join us in this national endeavour, by making similar voluntary reductions; which will free-up monies to combat this pandemic,” Uhuru urged.

By Peter Theuri 9 hrs ago
Premium Nairobi: The city of haves and have-nots stuck in colonial times