The legendary fimbo that head of State would never leave behind 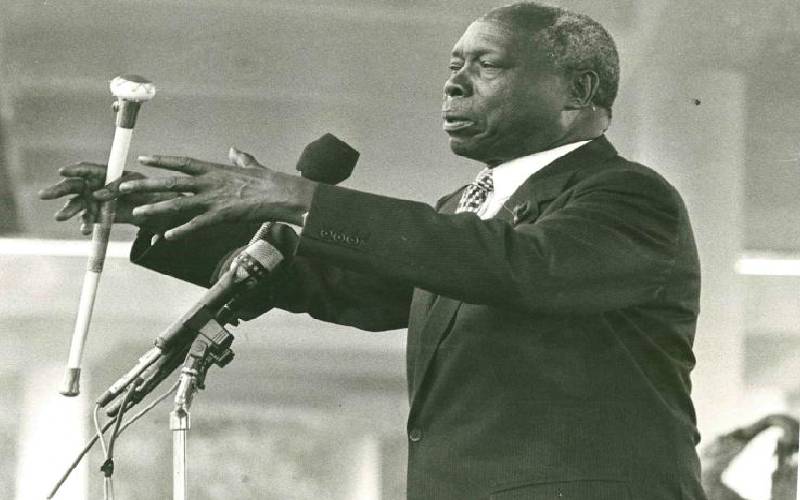 Former President Daniel arap Moi’s baton was famously known as a symbol of power, leadership and national cohesion. The rungu, made of ivory and gold, was christened ‘fimbo ya Nyayo'. Analysts say the rungu was a symbol of power and authority borrowed from Moi’s community. Although it may be debatable, the baton could be among the most travelled in the country as he carried it everywhere he went. Moi never appeared in any function within and outside the country without his fimbo. Once he took over the podium, he waved it to the crowd who responded with cheers. The former president treasured the fimbo so much that at one point in 1981, he refused to appear at the Queen’s event in Australia without it after it broke into two. Speaking at an interview on August 22, 2018, Moi's Press Secretary Lee Njiru recalled how a new one had to be flown to Australia prior to the Commonwealth Heads of Government Meeting in Melbourne. The baton broke in Los Angeles, USA, where Moi had visited after attending the United Nations General Assembly in New York. Mr Njiru said they had to stay in Honolulu, Hawaii, to wait for Moi’s personal assistant, Peter Rotich, to fly another one in before the head of State got there. "Rotich had to be there before Moi landed in Australia since Mzee had to greet people waving the baton, which was akin to President (Jomo) Kenyatta’s fly whisk,” Njiru added. Right direction By the time they got to Australia, Rotich had already arrived and handed the new baton to Moi. “There was no way Moi would appear before the public without his baton,” Njiru recalled. The fimbo made its mark in history, with patriotic folk songs sang about it. Kariokor Friends Choir sang a song titled Fimbo ya Nyayo, praising the baton for helping Moi lead the country. The fimbo acted as a symbol of Moi leadership taking the country in the right direction. The song became famous as it impressed values of national unity, economic growth and fight against tribalism and terrorism. The song praises Mzee Moi for introducing the Ministry of Sports, Culture and Heritage that gave Kenya an identity in terms of culture conservation and growth. “Kenyans, let’s take care of our culture and let’s unite. Let’s move forward as we are united by fimbo ya Nyayo. Unity is the greatest weapon against tribalism and terrorism,” sang the choir. The song also praised Moi for introducing the Ministry of Science and Technology that enabled Kenyans to become independent and grow their technological knowledge. The song also urged leaders to follow Moi’s path in being role models and leading the country well. The fimbo was so famous that it also appeared at the back of Sh20 and Sh100 notes, which had Moi’s portrait at the front. The largest monument in the president's honour was erected at Uhuru Park to symbolise his power, leadership and national unity The fimbo is also believed to symbolise the vision Moi had for a young Kenya back in the 1970s and 80s for it to rise to the top during his reign.  Other Moi’s statues were erected in major towns in Kenya, prominently featuring his ubiquitous fimbo. One icon along the Malindi-Mombasa Road bears two goblets that resemble his baton.