Chinese medics have been spotted sealing a Coronavirus patient in a plastic tube to avoid contaminating others.

In the footage released by Radio Free Asia, two medical workers are seen dressed in hazmat suits, pulling an individual from an ambulance and later wheeling them towards the hospital.

The clip has been placed to originate from Huizhou in southern China's Guangdong Province. The city is said to have reported its first confirmed case on Monday. 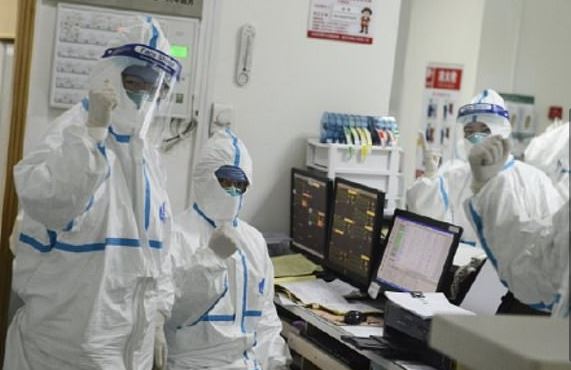 An outbreak of a new coronavirus that began in the Wuhan city, China, has killed 18 people and infected nearly 650 others globally.

The virus has caused alarm because it is still too early to know just how dangerous it is and how easily it spreads between people.

The SARS-like disease was first reported in China before spreading to Taiwan, Thailand, South Korea, Japan and the US.

Scientists yesterday warned as many as 10,000 people could have been infected in Wuhan alone

According to Reuters, the previously unknown strain is believed to have emerged late last year from illegally traded wildlife at an animal market in Wuhan.

Thailand has reported four cases and South Korea, Japan, Taiwan and the United States one each. Patients in these cases were either residents of Wuhan or recent visitors to the city.

China says the virus is mutating and that there is evidence of respiratory transmission.

Wuhan, with a population of 11 million people is currently on lockdown. Transport has been shut and outgoing flights suspended.

Airports around the world have stepped up screening of passengers who had traveled to China.