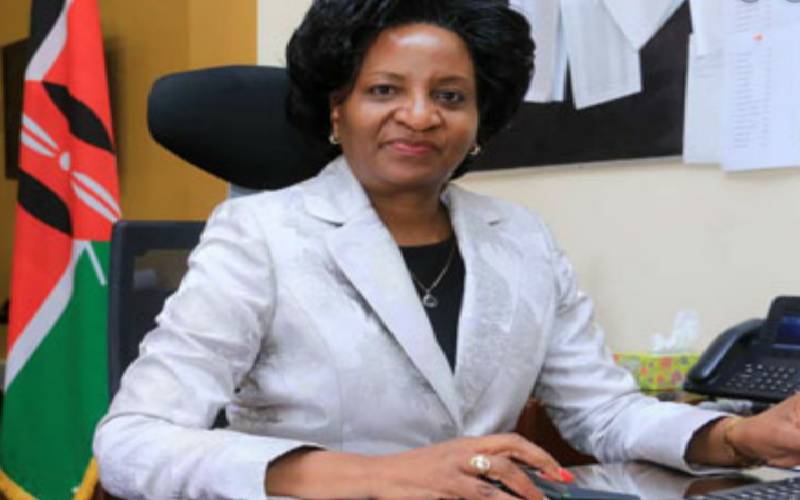 The Judiciary has denied claims that it had suspended a Mwingi magistrate for handing over a minor to her mother despite the child’s opposition. Judiciary’s Chief Registrar Ann Amadi (pictured) told The Standard that a magistrate cannot be disciplined for doing her work. “The child is with her father and the case will be heard on Wednesday. We cannot discipline magistrates for doing their work. If there is any complaint, we will deal with it but so far there is none,” said Amadi.

Viral video A video of the minor clinging to her father and wailing in protest that she shouldn't be handed to her mother, as ordered by Mwingi Court Senior Resident Magistrate Grace Kirugumi in December 2019, went viral last week. The nine-year-old, referred to in court papers as SW, is at the heart of a three-year custody case pitting her mother JKK and her father EMM.  Court documents say the father was supposed to appear in court on January 9 to explain why he had not handed over the minor to her mother. His estranged wife wanted him jailed for six months for disobedience and be ordered to pay for the cost of the case. However, on January 8, the duo agreed that the father should produce the minor the following morning accompanied by a police officer from Mwingi Police Station. At the same time, the warrant of arrest which had been issued by the court was lifted until January 9, pending full compliance of the orders.

Court orders The magistrate had allowed JKK to take the child and enroll her in a school of her choice. But the minor caused a scene and protested going with her mother. She wanted to remain with her father, a school teacher, who has raised her for the last nine years. According to the orders, JKK, the mother, was to have custody until the minor attains 18 years. The father was to be with the child on two school holidays. Couple fighting over child The parents of the minor who are separated, are in an unending fight over the child. According to court documents, the mother accuses her estranged husband of cruelty, claiming their relationship turned sour due to violence.

Born in February 2010, the girl was abandoned in a rental house where her mother was tenant. Court documents read that when JKK and EMM broke up, she left with minor who was barely months old. EMM told the court that he received a distress call from unknown people asking him to go and collect the child who had been abandoned in a rental house. He took over all the responsibilities of nurturing and bringing up the minor for seven years. In 2017, the woman filed a suit a seeking custody arguing that as a mother, she has an upper hand to keep her daughter. She argued that she had been unable to reach the man who is a teacher at a local school so that she could explain her long absence. She also said she now has a stable job and has heard that her daighter is not going to school. In response, the father produced the child’s report cards and other supporting documents saying it would be wrong to disrupt the child’s life after eight years. “I have no objection to letting my daughter and her mother bond,” pleaded the father. On November 13, 2019, the court ordered that a children’s officer visits the man’s home to find out the condition of the minor. “The preliminary children officer’s report informed that the minor was well and in good health,” read court documents.

The court ruled that the girl remains with her father and to continue attending school.

Maraga: Executive Order No.1 of 2020 does not apply to the Judiciary