For Mudavadi to remain relevant, he must take risks and make bold decisions in 2020

Politics
Conversely, however, it could also mean Mudavadi is far too cautious for a politician 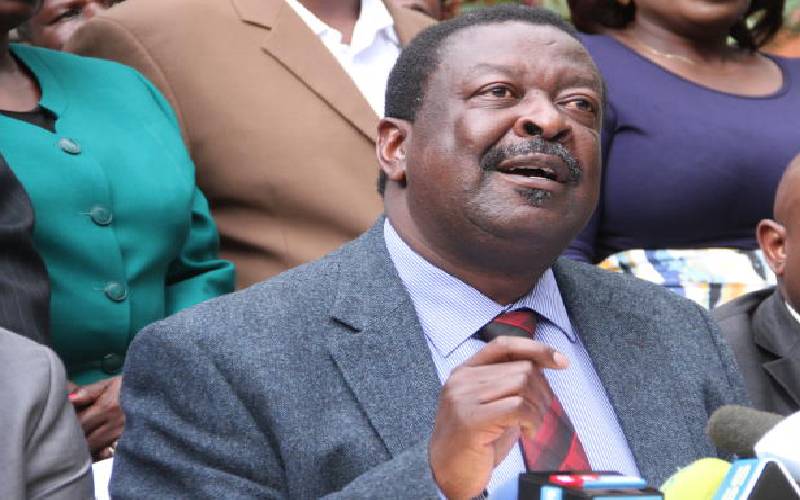 ANC party leader Musalia Mudavadi is the new gentleman of Kenya’s politics, after retired President Mwai Kibaki. He has also declared himself the new voice of the opposition. Former Cabinet minister and retired Head of the Public Service, Dr Sally Kosgey, has said of him in a recent newspaper interview thus: “He is a likeable leader. I find him to be very correct.” In politics, this compliment is double-edged. On the one hand, the compliment speaks of a leader who plays by the rules. This is a rare bird – the kind of person you do not easily get in politics anywhere in the world. To that extent, Mudavadi comes out in commendable light.

Conversely, however, it could also mean he is far too cautious for a politician. He does not want to make mistakes, or to be seen to offend anybody. In this strength lies a major flaw. You cannot afford not to be a risk taker in politics. If you must make correct decisions all the time, then be prepared to be a follower rather than a leader. This way, you allow others to decide. When you have seen the popular trend of things, you can join in. It is the only way to remain correct all the time. The ANC leader must be ready to take bold decisions in 2020 and beyond for him to remain relevant in future scenarios. He has done well in 2019, positioning himself as the voice of reason and speaking on issues close to people’s hearts – such as the ailing economy, unemployment, over-borrowing by the State and the need for the BBI to be people-focused.

That aside, Kenyans must see more purposeful robustness in the ANC leader. He must be prepared to blaze the trail for other people to follow. Pointing out issues in pressers is inadequate. In 2020, he must step out of his comfort zone and meet Kenyans in public spaces, away from church services, funerals and other chancy gatherings. However, Mudavadi’s biggest survival assignment in 2020 will be to solidify and rally the Luhya nation and the entire Western region behind him. Other major players will only respect and listen to him when he has his people with him. As things stand, Western is everybody’s fishpond. Both ODM leader Raila Odinga and Deputy President William Ruto believe that this is their constituency for the taking. While ANC has a significant number of MPs in the region, they have sometimes behaved like rogue siblings, readily hobnobbing with Mudavadi’s competitors and ridiculing him. He has to find a formula to clinically end this. Finally, he must seriously begin considering future alliances besides and beyond NASA, even as he consults and works closely with Kalonzo Musyoka and Moses Wetang’ula.

SEE ALSO: ODM to kick out 9 MPs for working with Ruto

He will do well to know that there are no permanent friends or enemies in politics.