No error at all in ‘End of an error?’ headline 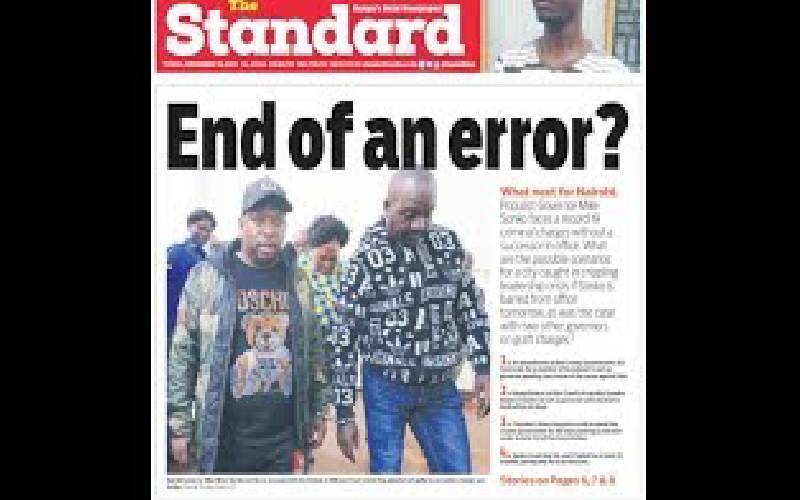 Flamboyant Nairobi County Governor Mike Sonko ran into strong headwinds last week. Hitherto deemed an untouchable, he was arrested in a most uncivil manner and was later arraigned for corruption. An accomplished drama queen in his own right, he did not disappoint. He did not let police officers put handcuffs on his wrists unchallenged, and so they had to break a sweat to accomplish that mission. Missing in action at the time of his arrest were the youth who normally form part of his colourful entourage wherever he goes. The inevitable reactions on social media - for and against the manner of arrest - came in droves. Newspapers carried juicy headlines, but none juicier than the one by The Standard on December 10, 2019.

It read, ‘End of an error?’ Some social media vigilantes pounced with all the glee they could master. ‘Jokers’, ‘mediocrity’ and ‘githeri media’ were some of the epithets used to discredit the headline. For those who understand the dynamics of Nairobi and its politics, the headline was apt, and indeed, there is absolutely nothing wrong with it. From the social media discourse generated by the headline arise  issues like ‘context’, ‘poetic licence’ (the  freedom to move away from acceptable, established rules of language when speaking or writing in order to create an effect), ‘metaphors’, ‘figure of speech’ or ‘figurative language’.

Understanding context is critical to deriving meaning or value from any form of narration. Context is defined as ‘words that surround other words and influence what those other words mean’. Against the backdrop of a dysfunctional county government without a deputy governor, many County Executive Committee members dismissed and poor public service delivery; to some people, indeed many people, the election of Sonko as governor is seen as a monumental error.

Without being explicit, The Standard’s headline simply posed the question; would the arrest and arraignment of Sonko bring the perceived error of his election to a desired end? To put the matter of context into perspective, let us use the following narratives. Alfred works in a leather industry that deals in skins. At work, they are required to fashion skins at certain stages into specific moulds that require them to work inside the moulded skins. On the other hand, Beatrice is seated somewhere, lost in deep thought about her future. Not conscious of her surrounding, something suddenly touches her ear, and she recoils in alarm. If, say, Alfred found a snake in the skin he was working on and jumped out in alarm, it can be reported that he “jumped out of his skin”. In this case, ‘his’ is specific to the skin he was working on because obviously, other workers would be doing the same with their own skins.

Beatrice’s alarmed reaction to that unexpected touch is idiomatically referred to as ‘jumping out of one’s skin’. The operative words ‘jump out of skin’ remain the same, but the meanings differ in these two contexts. If you also consider expressions like;  ‘throw under the bus’ or ‘from the horses’ mouth’, one can take them literally  or, in the first case, take it to mean ‘betray’ and in the second case to mean ‘someone with first-hand knowledge/information’.

Figurative language has more flare and dramatic effect. It uses alliteration (usage in which nearly all words in a sentence begin with the same letter. A more common one is, ‘she sells sea shells by the sea shore’. Note that most of the words in the sentence begin with letter ‘s’), metaphors, similes (comparing two dissimilar things. For example, “Like a bird in the air, the kite flew), clichés (familiar and common phrases like ‘No retreat, no surrender’) and analogy (likeness or similarity).   In the second paragraph, reference is made to; ‘youth who’. The word ‘youth’ is used in singular form yet refers to a group of teenage men and women. Of course, there are those who prefer to use the plural form, but that is bad form. Youth, besides denoting an age group (under 20 years), can be used as a plural noun to collectively refer to a group of teenagers as explained, or a single individual. To use the plural ‘youths’ when referring to a single individual in a group of two or three is acceptable, but to avoid its use altogether would be better. In a sentence, we can say; “The two youths in his care have made tremendous improvement”. The cardinal number ‘two’ is what tells us that the plural noun ‘youths’ addresses both individuals as separate entities. Mr Chagema is a correspondent for The [email protected]