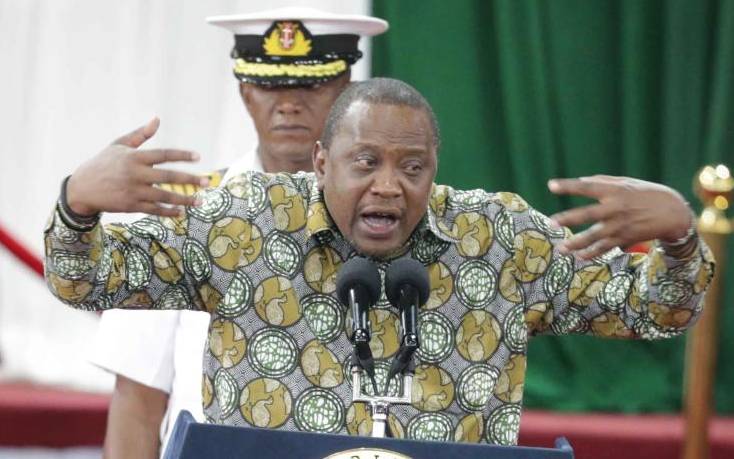 President Uhuru Kenyatta (pictured) yesterday led the country’s political class in yet another attempt at burying the culture of divisive political hostilities. The Head of State hosted key political leaders at the Bomas of Kenya in Nairobi, where he rallied them to not only soberly discuss the content of the Building Bridges Initiative (BBI) report, but also lead in living the spirit of the document that espouses the need for unity, political tolerance, and inclusivity. Describing the report's launch yesterday as heralding of a new chapter in the country’s history, Uhuru, as did a majority of the rest of the leaders who spoke at the forum, chided politicians for their selfish political hypocrisy, which he said was always calculated at dividing Kenyans for their own ends.

He challenged them to rise above the rhetoric and chart new political dawn for the country.

“Let us now be mature and let that maturity be seen in our politics,” the President said as he launched the report, a product of a 14 member task-force whose composition and work had created suspicion among politicians angling for his succession in 2022.

Uhuru was, especially, emphatic on the need to ensure politicians cultivated a culture of reconciling their troops after the electioneering period, saying constant bickering and hatred often affected the livelihoods of Kenyans. “I appeal to the political class; please do not divide these people (Kenyans). They don’t deserve it. These are a mature people and when the time comes, Kenyans are not stupid, they will elect a person of their choice,” appealed Uhuru. The President said contrary to what some Kenyans were saying, the BBI report, that is the fruit of the handshake between him and ODM leader Raila Odinga, was not a political tool to propel anyone to power, but a means of unifying everyone.

The BBI team was co-chaired by senators Yusuf Haji (Garissa) and Amos Wako (Busia). The meeting, though meant to unite the leaders, had a sense of the obvious political suspicion that has existed between those seen as backing the Uhuru-Raila pact, popularly known as the Kieleweke team, and their opponents Tangatanga, who are allied to Uhuru’s Deputy William Ruto. At one point, Senate Majority Leader Kipchumba Murkomen, almost failing in his bid to control his emotions, wondered how the speakers at the forum had been picked. He specifically questioned how the organisers settled on Suna East MP Junet Mohamed as the Master of Ceremony. The moment attracted raw emotions, with a section of those in attendance momentarily shouting down the Elgeyo Marakwet Senator as differences in political divide threatened to mar a forum that had appeared to find the truce. It is such divisive incidents that led the president to plead with the politicians to bury the hatchet and focus on serving the interests of Kenyans. He called on those behind the two political formations to end their hostilities and kill the groupings, saying they were dividing Kenyans the more.

“These groups, ati Tanga tanga, sijui Kieleweke. Mara naskia sijui warembo wa huyu na warembo wa yule, these groups should just go,” said Uhuru, making reference to the two women's groupings that have taken political sides in the showdown. Earlier, Murang’a Woman Rep Sabina Chege had vowed that the two women's groups - Embrace and Inua Mama - would immediately end their hostilities in the spirit of the new dawn. Uhuru and Raila hailed the BBI report as keen on addressing the feeling of exclusion that comes after national elections, where those who lose polls go empty-handed, while winners take everything. “This animosity, tension, and anger that always result in political violence is brewed by that feeling of exclusion,” Uhuru said. Raila challenged Kenyans not to look at the proposals of the report as tailored to fit the political interests of one person, but instead focus on how best it could address the challenges of the past and give hope to posterity. Ruto, whose allies have in the past expressed reservations on the process, warned against the dangers of it being hijacked by the political class to advance their interests at the expense of those of the majority. “We must make sure that this document speaks to the majority of Kenyans; their fears, challenges and aspirations. We should avoid the costly and potentially divisive process that will tear us further,” Ruto said. He said the process would form the basis of the national conversation, where all views would be considered. “There should be no superior or inferior opinions, and looking at the proposals I am impressed that it recommends that after a political contest, everyone will have a role to play and that there will be no winners or losers in the contest,” said Ruto. He hailed Uhuru and Raila for "biting the bullet" to ensure peace in the country.

Amani National Congress leader Musalia Mudavadi called for an inclusive conversation about what needed to be changed as part of the recommendations of the BBI report. “Don’t convert BBI document to the political elite. It should not be about sharing positions. What about motivating the civil servants? What about the teachers? This is bigger than just sharing positions. What is ailing us as a country is the economy,” said Mudavadi. Wiper leader Kalonzo Musyoka told the delegates Kenyans should not be afraid to seek forgiveness as the starting point of a unified nation. “Do not be ashamed to seek forgiveness. This is what will forge the unity we want,” said Kalonzo. Bungoma Senator Moses Wetang'ula reminded the country that it had failed to address issues affecting its citizens every electoral cycle. “We have insulted each other and we have failed as a country. Political violence every election should be addressed conclusively. We must read the document carefully and improve where there is a need,” said Wetang'ula.