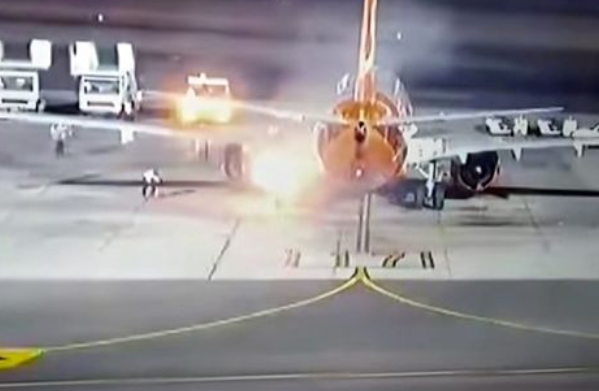 A plane that had just landed in Egypt burst into flames minutes after landing while carrying 196 passengers and crew. Passengers onboard the Ukrainian plane had just arrived at Sharm el-Sheikh airport on Saturday when the plane's landing gear caught fire. Footage shows the Boeing 737-800 aircraft parking on the airport ramp according to the crew's guidelines.

Shortly after, the left tire catches fire and is then engulfed in flames. Thick smoke billowed from the back of the plane as the airport's protection and rescue personnel rushed to the aircraft. hey immediately put out the flames and stopped it from spreading to the rest of the plane. An Egyptian Aviation Ministry official confirmed the plane belongs to the Ukrainian low-cost airliner SkyUp Airlines. An initial investigation report indicated that the fire started as a result of hydraulic oil leak on the plane's tires.

The aircraft reported an issue while landing in the popular Egyptian Red Sea resort on Saturday. The fire lasted about a minute before fire crews controlled the situation. A total of 189 passengers and all seven crew members were disembarked without injury, reported Flight Global. A spokesperson for the Egyptian civil aviation ministry said the fire 'could have turned into a disaster' and it would have spread to other parts of the aircraft had the staff not acted 'professionally'. The captain of the SkyUp Airlines flight praised the crew at the airport for their professionalism in dealing with the fire, in particular their speed of response and support in extinguishing the fire and bringing the passengers to safety.