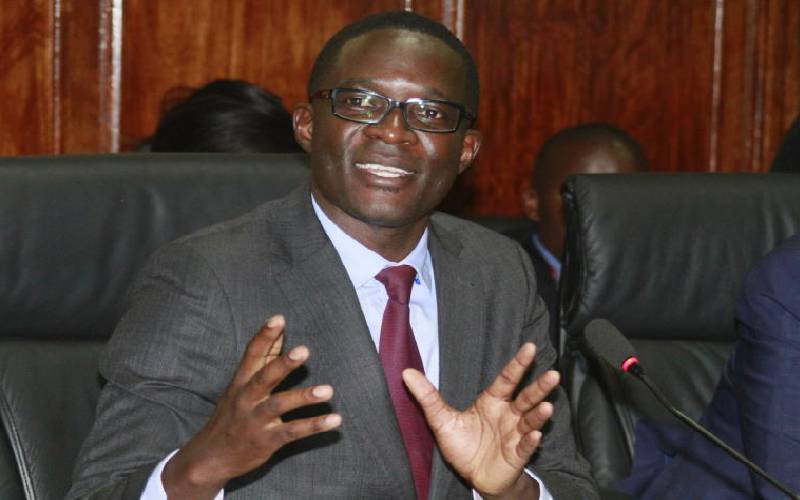 A former Chief Executive Officer of the national electoral agency has faulted the Punguza Mizigo referendum bid being pushed by Third Way Alliance. In an article published by Policy House (PH), Ezra Chiloba (pictured), says the quest by Ekuru Aukot appears to be populist and taking advantage of the debate on marooning wage bill to seek public support.   Punguza Mizigo, according to the former Independent Electoral and Boundaries Commission (IEBC) boss, has been framed around fiscal discipline at least on the face of it, but the initiative presupposes that the cost of Government is too high. “On the contrary, the Office of the Auditor General undertook a study on the impact of the 2010 Constitution and concluded that on the whole the cost of running Government had risen, but the increment was not significantly different from the previous period,” the critique states. Legal officer The publication is co-authored by Chiloba, former electoral commission senior legal officer Moses Kipkogey, Abednego Ominde and Bridgete Ndong. They say it does not mean that there are no issues of concern, as the Auditor General observed that the wage bill was an issue that required intervention at both national and county levels through streamlined policies. “The public concerns about the expensive nature of the Constitution are much the result of increasing wastage of public resources at both levels of government. The growth of public wage bill is certainly a matter of concern.” The Auditor General’s report of 2016 raised the need for the Government at both levels to undertake austerity measures, including assisting redundant staff at the county and national levels to exit the public service. This will ease the cost burden,” the report says. Punguza Mizigo has focused on reducing the size of Parliament at the national and county levels, the size of independent commissions, wages to public and State officers and reducing the levels of corruption.  “Punguza Mizigo Bill does not show how the proposed changes would actually lower the cost of Government. Further, the initiative ignores the findings of the Auditor General inviting policy makers to look at the entire public sector in order to arrive at the most optimal interventions.” The article adds that Punguza Mizigo seems to deepen the contestation between the national level and county level government. “By calling for a reduction of the number of constituencies from the current 290 to 47, new forms of political contestations will emerge. Further, the call for abolishing nominated seats at the Senate and county assembly level is more of a reaffirmation of a position held by some elected officials at both levels.” The article says that under the Punguza Mizigo initiative, one encounters an immediate problem. What would be the formula for delimiting wards? If we go by the approach as defined by the IEBC, the number of MCAs will drastically reduce if the Bill is approved. “This is how: Having done away with 290 constituencies, we shall have 47 counties as “constituencies.” If a multiplier of five applies, as was the case in 2012, we shall have only 235 wards, a number that is less than the current constituencies. It could be argued that since each county will have three elected representatives, that would give us 705 wards only. Again, this number is less than one half of the current 1,450 wards.” Bicameral system In countries with bicameral system of parliament, the Upper House and the Lower House are elected from different electoral units and sometimes the electoral formula is different, according to the authors. “The Punguza Mizigo initiative creates a blurry line on the mode of establishment and function of Kenya’s Senate and National Assembly. Without creating a distinction of the two seats from an electoral system design perspective, Punguza Mizigo renders the bicameral system weak.”