Opinion
Some professors are not available for their students for years, losing the documents and demoralising them. 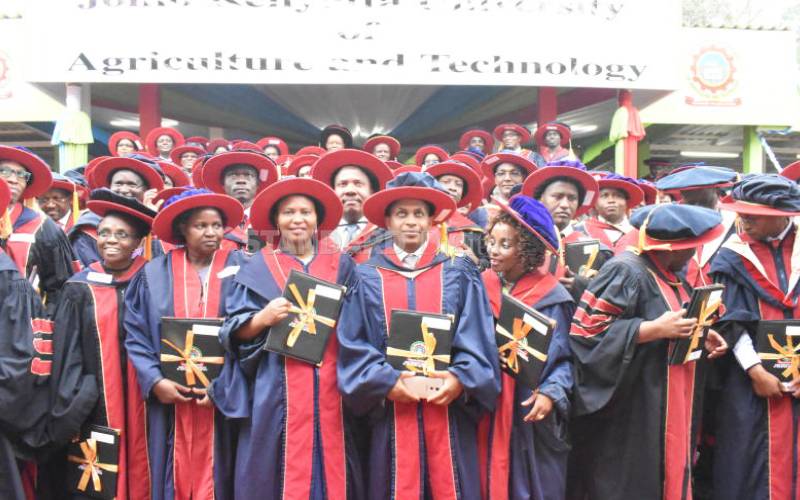 Jomo Kenyatta University of Agriculture and Technology (JKUAT)awarded degrees to 118 doctoral candidates in its latest graduation and some quarters are making loud noises. The critics are basing their arguments on the sheer number of graduates rather than the process of teaching, examination and awarding of Degrees. There is nothing wrong with awarding PhDs or any other degrees to qualified candidates, and my alma mater has invested sufficient resources over the years to admit, train, supervise, examine and award advanced degrees. I believe the professors, doctors and JKUAT cannot be blamed for providing standardised and consistent supervision to their students, which enables the process to move forward and fill the graduation funnel. This is unlike some universities in Kenya where the lecturers who taught me at bachelor degree level in 1998, and who were pursuing doctoral degrees, are yet to graduate.

In some universities, PhD supervisors delay drafts of proposals for years, losing them and asking for copies every time the student asks for feedback. There are frustrated students who are unable to move forward because the supervisors are not available to review and correct the proposals and even the eventual thesis. External and internal examiners frustrate students, causing undue delay in submitting the thesis for viva voce defence. JKUAT implemented a system of reviews with timeliness where lecturers are required to give feedback to students. This has improved the process of supervision immensely.

A standard PhD course should take between three and five years to complete. Any period longer than this means either the supervisors are unavailable to do their work or the student is not serious in moving the research forward. We were admitted as a group of 50 students in June 2012 and after three years, only one had graduated. In five years, only seven had completed from that cohort. If graduating with a PhD at JKUAT is easy, why such low completion rate? Less than 10 per cent of students who join PhD in any year in Kenya graduate within five years. The total time allocated for a student to graduate is seven years. Those, like Prof Makau Mutua and Counsel Ahmednasir Abdullahi who made adverse comments against JKUAT graduates should consider auditing the process of awarding degrees before deriding the university. Attacking the reputation of an educational institution with no evidence of quality issues is unfair and affects the lives of the graduates and their lecturers. Questioning the credibility of Kenyan PhDs has become the pastime of many pundits. Being a graduate of JKUAT, I can vouch for the rigorous process the university undertakes in ensuring that its product is fully baked. The problems with PhD students in this country are not of their own making. There is no funding for research. There are no refereed journals tailored for the local academic environment. No local publishers are interested in printing and updating local research as books.

Some university departments are not interested in even assisting the PhD students with simple materials like expensive research software or access to Jstor (a digital library of academic journals, books, and primary sources) and other journal archives. Some professors are not available for their students for years, losing the documents and demoralising them. Some students, frustrated with Kenyan universities, sought credit transfers to international universities and graduated within a few years. A friend who earned his PhD from an American university says there’s a systemic structural problem in Kenyan universities. He says a friend of his has been a PhD candidate since 2003, yet he has completed his and supervised and graduated two PhD students and 21 masters students since 2013. It is quite telling that majority of the scholars leading departments in Kenyan universities are not a product of those universities. It is also telling that Kenyans who joined international universities graduate within three years with their advanced degrees and when a Kenyan university uses the same standards to graduate its students, there is an outcry and accusations of low quality products. I believe JKUAT graduates are of standard quality and can hold their forte against any other graduate from any university, including the Ivy leagues of this world. I am a PhD graduate of JKUAT. I believe this is a first class university functioning under very restrictive conditions. Those throwing mud at it should first ask those of us who were there and who know the process. Dr Sheikh is a scholar and author of ‘Blood on the Runway: The Wagalla Massacre of 1984’