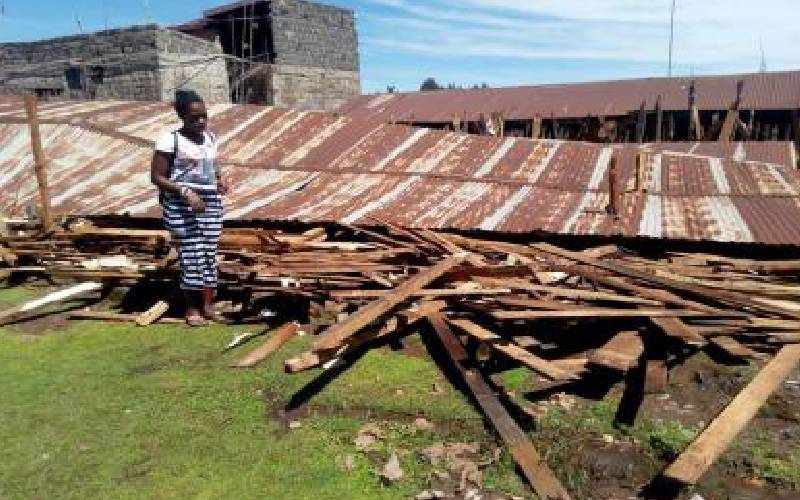 At least 15 families were left homeless after auctioneers demolished the wrong structures in Matuiku Estate in Elburgon, Nakuru County. Youths escorted by the police raided the estate at dawn and ordered the tenants to remove their items from rooms before bringing the building down. But according to the property owner Wang’ombe Chomba, the structure's ownership was not in dispute.

“My property had no case and I am shocked at what has happened. I could not stop the demolition since the youths were rowdy and guarded by the police as they brought down the building,” he said. His wife, Alice, said they had lived on the property for the past 18 years and had not been served with any eviction notice or informed of any ownership dispute before court.

“We have worked for this property for nearly 20 years now. We are not aware of any person laying claim to it. It is unfortunate that this has also affected our tenants,” said Alice. Speaking to The Standard on the telephone, the auctioneer confirmed that the wrong building was demolished. “We demolished the houses showed to us on a previous date. We were shocked to learn that we had been misdirected. We were to demolish plot 16 and not 17,” said Tango Auctioneers manager Muthee Ngunjiri.

Mr Ngunjiri said his client had differed with a member of the family who had declined to vacate his house. He then sought an eviction order. He said the firm was holding consultations with its client to have the wrongly demolished houses rebuilt. During the eviction, some of the tenants narrowly escaped injuries in the mad rush to save their household items. “I tried to save a few things after they told us to move out. I had ran back in to save more when the house started coming down. A neighbour saved me but I lost almost everything," said Teresia Wairimu. The evicted tenants accused the youths of intimidation, saying they seemed in a hurry to bring down the building.

“They were armed with metal bars. We pleaded for more time since we had not been notified about the demolition, but they threatened us,” said Njoroge, a tenant. The owner has vowed to proceed to court to seek compensation for himself and his tenants. “I am moving to court on my own behalf and on behalf of my tenants. My house was wrongfully demolished and the one who directed the auctioneers here must pay,” said Mr Wang’ombe.