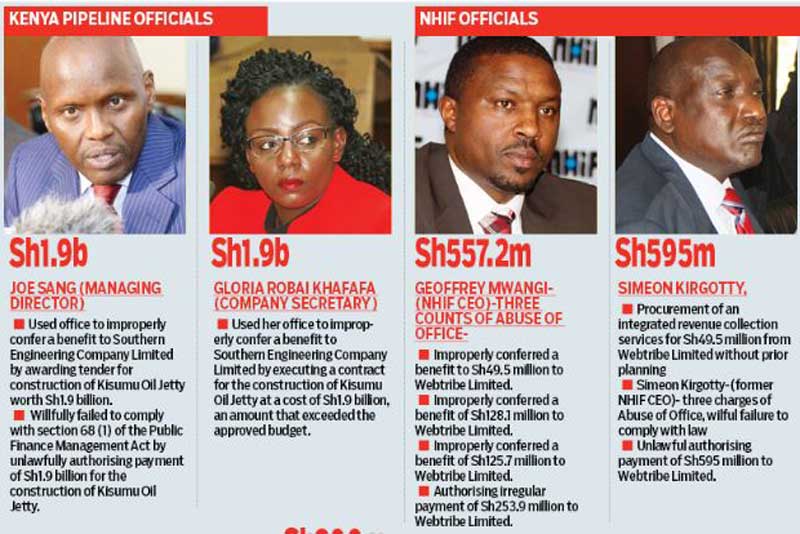 Multi-million shilling properties, including posh houses and bank accounts of parastatal chiefs facing graft charges, are to be frozen.

Sources indicate the Asset Recovery Agency has profiled the wealth portfolio of the top managers of the National Hospital Insurance Fund and Kenya Pipeline Company, who face various charges linked to questionable spending of Sh3 billion.

After the high-profile suspects take plea, the agency, which has been part of the investigating team, is ready to move to court seeking to freeze their property - which includes some palatial houses in prime city spots like Karen where an acre can fetch Sh100 million - and bank accounts, pending determination if the wealth is ill-gotten.

The agency is said to have received more personnel and resources mainly from police, prosecution and National Intelligence Service to enable it cope with rising demands for background checks in the renewed fight against grand corruption.

It is pursuing similar applications against suspects in cases involving the National Youth Service I and II, National Cereals and Produce Board, Kenya Power, Kenya Bureau of Standards and Kenya Revenue Authority among others.

In the NYS cases, several bank accounts prosecution alleged were used as conduits for more than Sh1 billion funneled out from the State firm have been frozen.

The agency has also filed an application stopping three members of a family - Phylis Ngirita, Lucy Ngirita and Jeremiah Ngirita - from transferring three vehicles and five parcels of land allegedly bought using some Sh465 million they received from NYS within 22 months.

In the NHIF case, 21 suspects are expected to take plea today over allegations that Sh1 billion was lost through the JamboPay service.

The suspects are to answer to seven charges related to deception, fraud and abuse of office.

They will also face charges of engaging in a project without prior planning, willful failure to comply with the law relating to procurement and abuse of office.

They are also accused of failure to comply with the law relating to management of public funds, false accounting by a public officer, deceiving a principal and fraudulent acquisition of public property.

Kirgotty is the current secretary in the Ministry of Devolution and Planning.

Some of the officials were yet to be arrested by last night, but they had sent lawyers to inform police they would appear to take plea.

The NHIF group was held at the Gigiri Police Station where they received a number of visitors who included their relatives and friends.

According to investigators, a third party technology company was introduced to collect payments from parastatals, costing the taxpayer Sh1.1 billion.

Used to pay directly initially, NHIF had Quality Assessment Personnel who would scrutinise every claim made by civil servants.

Parastatals used to pay directly to the fund every quarter but in 2016, NHIF management decided to get the services of Webtribe, the operators of JamboPay to collect payments on their behalf at a commission.

“They wilfully failed to comply with the law relating to procurement, contrary to Section 45(2) and 48(A) of the Anti-Corruption and Economic Crimes Act,” said DPP Noordin Haji in a statement.

Webtribe, which was started at a cyber café by entrepreneur Muchemi, was a relatively unknown company five years ago but has in a short time transformed into a conglomerate handling payments for dozens of government entities and county governments.

By the time of going to press, Muchemi was still at large.

They will take plea for abuse of office, failure to comply with applicable procedures and law and engaging in a project without prior planning.

They were being held at the Muthaiga Police Station where they equally received a number of visitors including high-profile personalities in the country.

Detectives say KPC officials inflated the price of a petroleum jetty to Sh2 billion without plans on its usage, making taxpayers pay for what is now a white elephant project sitting on Lake Victoria.

Uganda and Tanzania are yet to construct their jetties and there is no petroleum carrier on the lake yet.

The Kisumu Oil Jetty was supposed to ease transportation of fuel to neighbouring countries by allowing ships from oil marketers to load fuel at Kisumu for transportation to Uganda for further distribution to Rwanda, Burundi and the Democratic Republic of Congo (DRC).

Investigators relied on expert opinion which revealed that even after spending Sh2 billion, the Kisumu Oil Jetty is not anywhere near completion.

Investigators, who compared the workmanship to international standards, established that its cost was thrice the price of Mozambique’s Matola Oil Jetty, which was commissioned and is already operational.

The jetty was commissioned by President Uhuru Kenyatta in April.