13 NHIF and KPC staff in custody as hunt widens 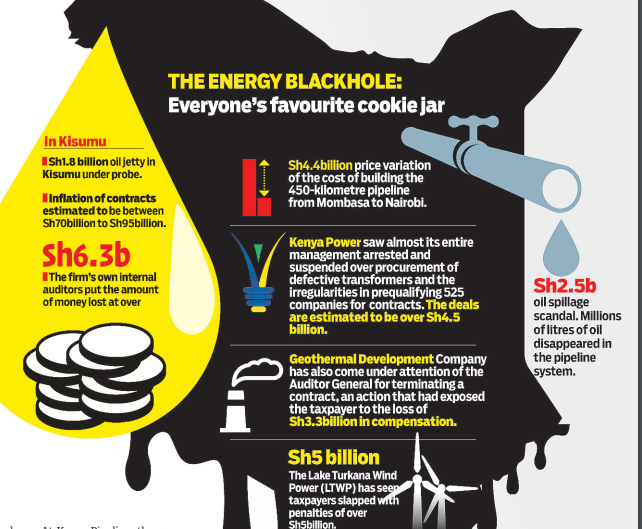 The arrest of individuals at two of the country’s largest parastatals yesterday marked a major breakthrough in the fight to safeguard public funds at two State firms that have been the focus of corruption crackdowns.

After weeks of boardroom drama and what investigators said was the erection of roadblocks by those suspected of graft, Director of Public Prosecutions (DPP) Noordin Haji recommended the arrest of 26 individuals at the National Hospital Insurance Fund and the Kenya Pipeline Company.

For some of them, it was the end of the road after playing cat-and-mouse games with detectives seeking access to critical documents that would have been used to nail them.

By the time of going to press last night, 13 individuals working for NHIF and Kenya Pipeline were cooling their heels at Muthaiga Police Station in Nairobi. Thirteen are still missing after switching off their phones in what detectives said was an attempt to evade arrest.

“They have no option but to surrender,” Director of Criminal Investigations (DCI) George Kinoti told the Saturday Standard.Of those yet to be arrested or present themselves to the authorities are NHIF CEO Geoffrey Mwangi who could not be found in his house in Karen. In Naivasha, the DPP -- who was addressing a legal conference of prosecutors -- was not sure whether the attendees should be happy or sad about the arrests when the crowd applauded him.

“I don’t know whether you should be laughing,” he told those who present.

In his hands is a staggering Sh2.1 billion that the DPP says was cumulatively siphoned from the two parastatals -- one of the most glaring cases of theft of public funds brought to light this year.

At NHIF, a third party technology company was introduced to collect payments from parastatals, costing the taxpayer Sh1.1 billion, according to detectives.

Initially, NHIF had Quality Assessment Personnel who would scrutinise every claim made by civil servants. Parastatals used to pay directly to the fund every quarter but in 2016, NHIF management decided to get the services of Webtribe, the operators of JamboPay to collect payments on their behalf at a commission.

“They wilfully failed to comply with the law relating to procurement, contrary to Section 45(2) and 48(A) of the Anti-Corruption and Economic Crimes Act,” said the DPP in a statement.

Webtribe, which was started at a cyber café by entrepreneur Danson Muchemi, was a relatively unknown company five years ago but has in a short time transformed into a conglomerate handling payments for dozens of government entities and county governments. By the time of going to press, Muchemi was still at large. At Kenya Pipeline, the company inflated the price of a petroleum jetty to Sh2 billion without plans on its usage, making taxpayers pay for what is now a white elephant project sitting on Lake Victoria. Uganda and Tanzania are yet to construct their jetties and there is no petroleum carrier on the lake yet.

The Kisumu Oil Jetty was supposed to ease transportation of fuel to neighboring countries by allowing ships from oil marketers to load fuel at Kisumu for transportation to Uganda for further distribution to Rwanda, Burundi and the Democratic Republic of Congo (DRC).

In order to nail the accused, investigators relied on expert opinion which revealed that even after spending Sh2 billion, the Kisumu Oil Jetty is not anywhere near completion.

Investigators who compared the workmanship to international standards established that its cost was thrice the price of Mozambique’s Matola Oil Jetty which was commissioned and is already operational. Worse still, the jetty, which was commissioned by President Uhuru Kenyatta in April, was fitted with pumps and pipes used for truck loading as opposed to the ship loading.

Therefore, it would take at least 32 hours to load a standard 4.2 million litre ship, instead of a normal four hours if the normal ship loading equipment had been installed.

NHIF board member Mudzo Ndzili was the first one to be picked at his rural home in Kwale at 4am yesterday, having arrived the previous night. He was bundled into a car for a nonstop drive and under tight security to DCI headquarters on Kiambu Road. He arrived in Nairobi shortly after 6pm.

The arrests sent shockwaves across the political divide, with Deputy President William Ruto warning against politicising the war on graft. Speaking at Lelboinet High School in Keiyo South, Elgeyo Marakwet County, during a fundraiser in aid of 12 churches, the DP said that watchdog institutions such as DCI and Ethics and Anti-Corruption Commission (EACC) should be left to operate independently.

“Our courts must be let to make decisions independently and should not be politicised. Judges in court should also conduct themselves in line with the law, let politics be played by politicians,” he added. He also asked civil servants to carry out their duties efficiently and without fear; saying the ongoing crusade against corruption only targets those behind the vice.

Premium Our son has made us proud, Wafula Chebukati's parents speak
Western
By Martin Ndiema
1 hr ago
KWS: Why vasectomy on Nairobi lion was best decision
National
By Brian Okoth
2 hrs ago
Elderly man inflates hospital bill to get extra cash from children
NEWS
By Collins Kweyu
2 hrs ago
Why we must remain vigilant for terror threats
Opinion
By Kithure Kindiki
2 hrs ago
.

By Martin Ndiema 1 hr ago
Premium Our son has made us proud, Wafula Chebukati's parents speak