By Betty Njeru | 4yrs ago

Some of the managers arrested include Company Secretary Gloria Khafafa and the Head of Procurement Vincent Cheruiyot.

The arrests which began early Friday morning come after full-on investigations by DCI over the disappearance of fuel in the Kisumu oil jetty.

DCI says the search for other managers is ongoing while those in police custody are being questioned at its headquarters in Kiambu. 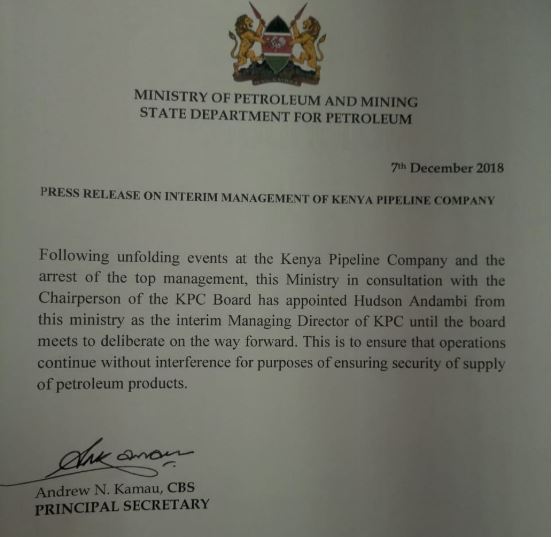 Sang had on Wednesday submitted a letter to the KPC board saying that he would not be seeking a new term next year, which ends in April.

The Kenya Pipeline Company has had its fair share of multibillion shilling scandals this year.

Again in May, detectives from Ethics and Anti-Corruption Commission raided the homes and offices of staff of Kenya Pipeline Corporation in a probe into fraud allegations.

The officials went to the Nairobi homes of former Managing Director Charles Tanui, General Manager- Finance Samuel Odoyo and Amina Juma of procurement, searching for documents over the alleged fraud in the Sh647 million supply of hydrant pit valves.

EACC CEO Halakhe Waqo said the commission was  investigating allegations of corruption in the award of the supply of the Hydrant pit valves complete with isolation valves and two year operational spares at Sh647 million.

Premium Women: Chin hair could be a sign of these health problems
Health & Science
By Rogers Otiso
11 mins ago
Abort or keep it? Let the woman make her choice
BLOGS
By La Patrona
21 mins ago
Unions oppose State plan to privatise public universities
National
By Winfrey Owino
21 mins ago
Why is RB music more explicit than ever?
Showbiz
By AP
35 mins ago
.

By Rogers Otiso 11 mins ago
Premium Women: Chin hair could be a sign of these health problems