Gunmen who killed the driver of an MP stormed into a popular night club to search for the lawmaker but fled after lights were switched off. Likuyani MP Enock Kibunguchy believes he was the target for assassination during the Sunday night attack in which the gunmen killed Douglas Wakacha who was in the car outside Soy Highway Motel, Kakamega County. Mr Wakacha was shot in the head which the MP has blamed on political rivals. The MP said he had finished meeting his constituents at the club, when he sent his driver to start his car parked outside the entertainment joint. The driver was, however, ambushed by the attackers, who fatally shot him before rushing back to the hotel to look for the MP. "The driver met the thugs at the parking lot and they shot him dead. They then ran back to the hotel, and ordered everyone to lie down," said the MP, who was clearing his bill when the gang walked in. The 11pm attack would have resulted into more casualties were it not for the quick thinking of the club's entertainment manager Edwin Lussa, who switched off the lights as the rifle-wielding men were asking for the MP.  “After shooting dead the driver at the parking lot, they made their way into the hotel and ordered us to lie down. I quickly dashed to where the switch was and switched off the lights. That must have scared them away,” Mr Lussa said. Lussa noted the gunmen rushed back to the MP’s vehicle, pulled out the driver who was slumped dead on the steering wheel and made away with the vehicle. They later abandoned the vehicle at a nearby Kipsomba village. Another witness, Natahn Mutembesi, said he saw the attackers walk into the club, moments after gunshots sounded outside. "We were ordered to lie down and we heard the attackers asking for the MP. It was at this point that the lights went off," he said. Likuyani Deputy County Commissioner Wilson Kimaiyo said that officers on patrol were dispatched after the incident and managed to recover the abandoned vehicle registration number KBQ 340Q, Mitsubishi Pajero. “We call on anyone with any information to divulge it to us to aid in the arrest and subsequent charging in court of the suspects. We are pursuing crucial leads and will soon make arrests,” said Mr Kimaiyo. He added the incident was an isolated case but the security team is pursuing all other theories to get to the bottom of the incident. "Were it not for God, he (MP) would not be alive. The magazine fell off the gun as the attackers prepared to shoot. It is God who jammed the gun,” said Kimaiyo, adding police are in possession of the magazine. 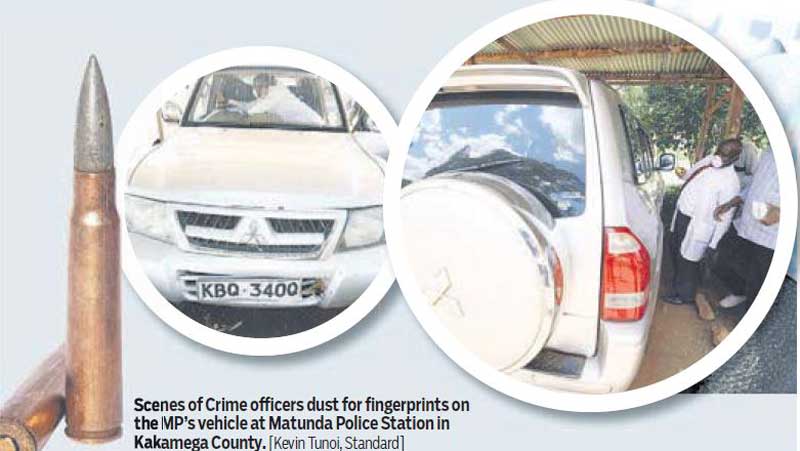 The MP who visited the scene the morning after the attack, claimed  some of his friends-turned foes had hatched a plan to eliminate him. “I have overheard several times that there were people who are not happy with my leadership. It is the same people who had attempted to rig me out during the last elections but failed,” Kibunguchy said. He called on politicians to use alternative avenues of handling political differences instead of shedding innocent blood. The MP urged the Government to hasten investigation and arrest the gunmen.