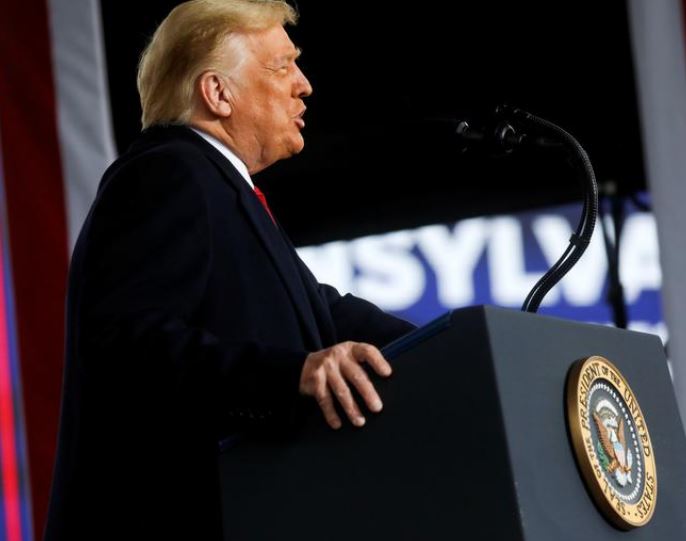 A federal judge on Tuesday rejected a U.S. government request to drop Donald Trump (pictured) as a defendant in a defamation lawsuit by a writer who said the president falsely denied raping her in a Manhattan department store a quarter century ago.

A ruling for the government would have shielded Trump from liability and likely doomed Carroll’s defamation claim.

Carroll had sued Trump last November in a New York state court, after he had denied having raped her in Bergdorf Goodman in the mid-1990s or knowing who she was. Trump said she fabricated the story to sell a new book, and added: “She’s not my type.”

Acting at the behest of Attorney General William Barr, the Department of Justice moved the case to federal court, where it said Trump acted in his official capacity when denying Carroll’s claims, and thus could not be sued personally for defamation.

But Kaplan said a law shielding federal employees from being sued for acts done during their employment did not cover presidents. He also said Trump did not make his statements about Carroll in the scope of his employment as president.

“No one even arguably directed or controlled President Trump when he commented on the plaintiff’s accusation, which had nothing to do with the official business of government, that he raped her decades before he took office,” Kaplan wrote in a 61-page decision. “And no one had the ability to control him.”

Carroll’s lawsuit is one of many legal actions Trump faces as he seeks reelection on Nov. 3.

He has denied the claims of several women who accused him of sexual misconduct occurring before he took office.

Roberta Kaplan, a lawyer for Carroll, said they looked forward to pursuing the defamation case in federal court.

“The simple truth is that President Trump defamed our client because she was brave enough to reveal that he had sexually assaulted her, and that brutal, personal attack cannot be attributed to the Office of the President,” she said.

Carroll said in a statement: “When Donald Trump called me a liar and denied that he had ever met me, he was not speaking on behalf of the United States. I am happy that Judge Kaplan recognized these basic truths.”

NO FREEDOM TO DEFAME

The Justice Department moved the lawsuit to federal court after Justice Verna Saunders of a Manhattan state court had in August rejected Trump’s bid to postpone the case.

She said the U.S. Supreme Court’s recent rejection of Trump’s claim of absolute immunity from criminal proceedings while in office applied to state court proceedings involving his unofficial or personal conduct.

That ruling could have allowed Carroll’s lawyers to seek a DNA sample from Trump, to match against a dress Carroll said she wore at Bergdorf Goodman.

The Justice Department’s intervention put that process on hold.

But the judge said its arguments went “much too far” by leaving Trump “free (to) defame anyone who criticizes his conduct or impugns his character,” without consequences for the president and regardless of the harm to his target.

Kaplan said it would be different if Trump were being challenged in court over his official conduct.

“A comment about government action, public policy, or even an election is categorically different than a comment about an alleged sexual assault that took place roughly twenty years before the president took office,” he wrote.