Donald Trump has claimed he may be immune to Covid-19, in a deeply unhinged message broadcast minutes after he checked out of hospital.

The President was admitted on Friday, being treated for coronavirus with steroids, antibiotics and a string of cutting edge therapies - many of which are unavailable to regular Americans.

But he checked himself out of Walter Reed military hospital on Monday evening, staging an elaborate arrival at the White House.

Then, in a video filmed on the Blue Room balcony, the President claimed the virus, which has killed 210,000 Americans, is really nothing to worry about.

He suggested his apparently quick recovery from the disease could be because he is "immune" to it.

And he indicated he was aware of the risks of his return to the White House carrying the contagious and deadly disease, but said: "That's OK."

The Republican leader has faced fresh backlash for removing his mask when he returned to presidential residence and making light of the deadly disease.

William Schaffner, a professor of preventive medicine and infectious diseases at Vanderbilt University Medical Center in Nashville, was quick to remind America of the power of the virus.

"This is a disease that is killing around a thousand people a day, has torpedoed the economy, put people out of work. This is a virus that should be both respected and feared," he said.

Democrats also weighed in. "This is a tragic failure of leadership," Democratic Senator Chris Coons tweeted.

Trump arrived home in a made-for-television spectacle in which he descended from his Marine One helicopter wearing a white surgical mask only to remove it as he posed, saluting and waving, on the mansion's South Portico.

"The doctors, the nurses, the first responders. And I learned so much about coronavirus.

"And one thing that's for certain. Don't let it dominate you. Don't be afraid of it.

Many of the medicines administered to the the President are not available to the public at this time.

He went on: "You're going to beat it. I went, I didn't feel too good. And two days ago, I could have left two days ago. I felt great, like better than I have in a long time.

"I said just recently, better than 20 years ago.

President Trump suggested he "had to" leave hospital, because he is a leader.

"I stood out front. I led. Nobody that's a leader would not do what I did.

It's at this point in the video that he suggests he is immune to the disease, for which he tested positive and suffered symptoms last week.

He said: "And maybe I'm immune. I don't know. But don't let it dominate your life.

"Get out there. Be careful. We have the best medicines in the world, and it all happened very shortly. And they're all getting approved. And the vaccines are coming momentarily."

He left hospital to cheers from a group of supporters who'd gathered outside, among press, as he made his way to a motorcade.

Trump was asked by one reporter "do you think you might be a super spreader, Mr President?" and "how many of your staff are sick?"

Trump responded "Thank you very much" and gave the press a thumbs up before getting into a car to be taken a short distance to the aircraft.

He returns to a White House potentially still riddled with the deadly virus, which has already spread to a dozen members of his team.

Among them is press secretary Kayleigh McEnany who yesterday confirmed she had tested positive.

McEnany, who is at the forefront of the White House's often combative dealings with the media, held a briefing for reporters on Thursday in which she did not wear a face mask.

Chad Gilmartin and Karoline Leavitt, who work in the White House's press office, also have tested positive, according to a source.

Minutes prior to emerging from the hospital's main doors, he had tweeted "back on the campaign trail soon" and previously boasted about how he had survived the "plague [that] came in from China". 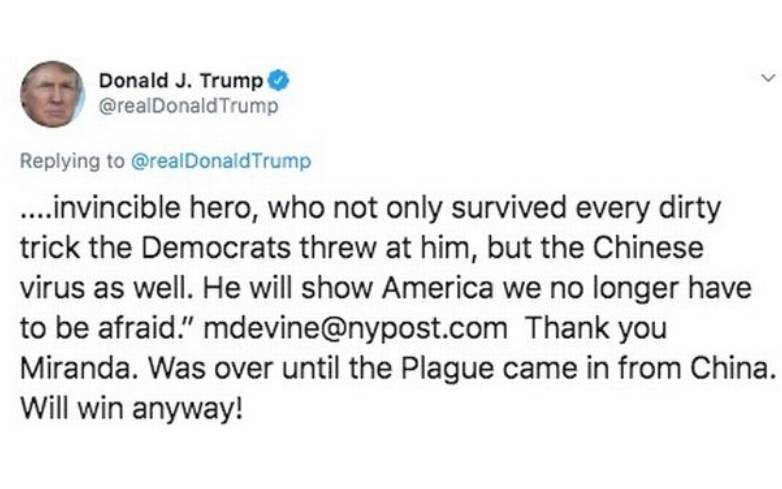 Trump has repeatedly flouted social-distancing guidelines meant to curb the virus' spread and ignored his own medical advisers.

He also mocked Biden at last Tuesday's presidential debate for wearing a mask at events, even when he is far from others.

Biden, who strictly adheres to social distancing and sports a mask in public, has so far tested negative for the virus.