Tribalism is not same as negative ethnicity 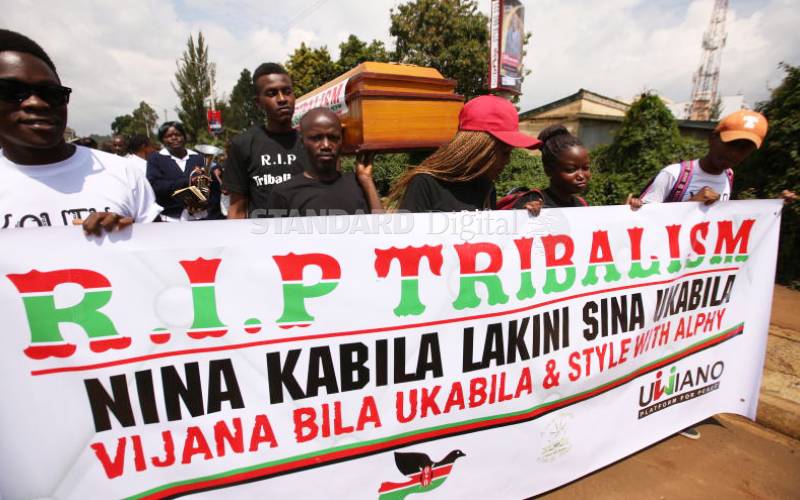 Ambiguity is one of the worst challenges in the mastery of the English language. Writings must be as clear as possible to avoid a second or wrong interpretation.

The last sentence of last week’s column was ambiguous. It read; ‘For instance, “Before loading the bag into the car’s trunk, the police dog was made to sniff it”.

A simple question makes the ambiguity glaring; who loaded the bags? Not the police dog of course, although that is the impression given.

The phrase ‘was made’ introduces another unnamed party, but because one has to determine who between the other party and the police dog loaded the bag into the car’s trunk, ambiguity is inescapable.

Break free from the shackles of tribalism to make Kenya great

A rearrangement of the wording to give the sentence a subject and object eliminates ambiguity, thus; “Before loading the bag into the car’s trunk, the police officers made the police dog sniff it”.

The point being emphasised is that sentences must have both  clearly defined subjects and objects in the right order, and that related words must be grouped together to preclude ambiguity.

Moving on, the Media Observer publication had an issue with a story in The Standard newspaper that used the words ‘tribalism’ and ‘negative ethnicity in the same context.

Simply put, the Media Observer wrote; “The impression created here is that tribalism and negative ethnicity are different. They are the same thing – unless The Standard can show otherwise”.

To benefit the Media Observer, tribalism and negative ethnicity are completely different things.

But because tribalism has been given a purely Kenyan perspective, it is easy to sympathise with the writer’s limited scope.

Tribalism is defined as ‘the state or fact of being organised in a tribe or tribes’.

This definition marks every single African a tribalist by the very nature of our social organisation.

In Kenya, our constitution recognises and encourages our diversity; a diversity amplified by our different cultures.

We need not look past the fame of the Maasai tribe in Kenya to appreciate this.

The Maasai practice positive ethnicity. Their fidelity to tribe, culture and ways of life impact positively on Kenya.

Tourists have travelled specifically to see the Maasai of Kenya.

The Maasai are the only Kenyan tribe that openly carries short swords without running afoul of the system, yet hardly use them to harm others, unless in self-defence.

Even used derogatively, tribalism simply means “the behaviour and attitudes that stem from strong loyalty to one’s own tribe or social group”.

Even here, the Maasai, El Molo and Ndorobo; all fiercely loyal their tribal identities, provide the best examples.

Not surprisingly, none has been accused of practicing negative ethnicity.

Negative ethnicity (toxic tribalism) occurs when an individual(s) use their tribe to harm or gain advantage over other tribes.

Normally, tribes with fewer members or resources bear the brunt of negative ethnicity when bigger tribes pick on them.

For instance, in Rwanda in 1994, the Hutu tribe used its superior numbers and dominance in the military ranks to oppress the Tutsis and the Twa who were the minority.

Closer home in 2008, some communities bore the brunt of the ignominious post-election violence in the Rift Valley.

Depending on the area involved, one tribe saw another as the enemy.

Antonyms are either nouns (boy, girl), verbs (sit, stand), adverbs (carefully, carelessly) or propositions (under, over).

On the other side of antonyms, we have synonyms which basically mean ‘words similar to’. Examples of synonyms include boy- lad, girl-lass, under -below and so forth.

On the whole, Kenyans love each other, but politicians always try to divide them while seeking election to Parliament.

Finally, let us make a distinction between the words Parliament, parliament, August and august.

Parliament (written with capital letter P) should be used to denote the place where elected leaders meet to legislate.

Parliament is alternately known as the august (starting with lower case letter ‘a’) house.

When we use upper case letter ‘A’ in August, reference is to the eighth month of the year.

A group of owls is called a ‘parliament’ (use lower case of letter ‘p’ to make the distinction).