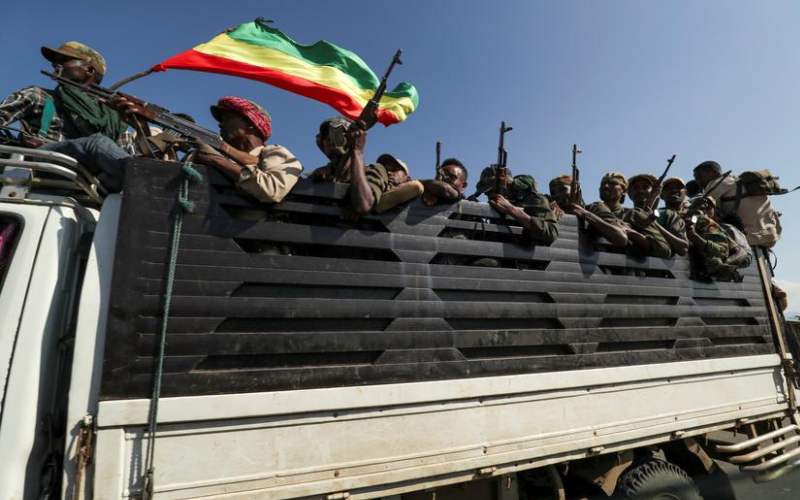 Government forces captured two towns from rebel forces in Ethiopia’s northern Tigray region, the government said on Friday, and Tigrayan fighters fired rockets at an airport in a neighbouring region.

The rocket attack on Bahir Dar, capital of Asmara region, raised concerns that the two-week-old conflict between the Tigrayan rebels and the central government could spiral into a wider war.

The United Nations meanwhile said it was making plans for as many as 200,000 refugees fleeing into neighbouring Sudan.

Hundreds, perhaps thousands, of people have been killed and tens of thousands of refugees have already fled from fighting in Tigray as Prime Minister Abiy Ahmed tries to hold his ethnically diverse nation together.

Ethiopian government forces are fighting their way towards Mekelle, the Tigrayan capital, from several directions.

In the north, Ethiopian troops took the towns of Axum and Adwa, a government statement said. They are now advancing toward the town of Adigrat, about 120 km (80 miles) north of Mekelle, the regional capital of Tigray and home to about half a million people.

“Many fighters of the junta have surrendered,” the statement said, referring to the Tigray People’s Liberation Front.

Tigrayan forces were not available for comment but in a televised address, spokesman Getachew Reda said their fighters have inflicted “increasing causalties” in Raya, to the south of Mekelle.

Tigrayan fighters also “eliminated enemy forces” from Mehoni in the south and Zalambessa to the northeast, Tigrayan TV said.

A government spokesman did not return calls seeking comment.

It has been impossible to verify assertions on all sides because telephone lines and internet links to Tigray have been severed since the conflict began.

Reda’s address also claimed responsibility for a rocket attack in the early hours of Friday on the airport in Bahir Dar, which Amhara authorities had announced earlier in the day.

He said it was in retaliation for bombing raids launched from there. “We will continue to target whichever airport has been used to stage an attack on Tigray,” he said.

Bahir Dar, Amhara’s lakeside capital, is located hundreds of miles from the fighting in Tigray. Tigrayan refugees have told Reuters that Amhara militiamen are fighting on the government side. The two regions also have a border dispute.

At the Um Rakuba settlement in Sudan, where aid workers are setting up a camp in the scrubland for 10,000 mainly Tigrayan refugees, those who arrived queued up for cornflour porridge and put up makeshift shelters.

Yohannes Gor, 28, arrived by foot after fleeing the Ethiopian town of Humera, close to the border, 10 days ago with only the clothes he was wearing.

“I live under this tree and sleep on the dirt,” he said. “I lost all trace of my family and I don’t know what happened to them.”

Aid agencies fear a humanitarian emergency in Tigray, where hundreds of thousands of people depended on relief aid even before the conflict. Refugees have crowded into boats to cross a river to Sudan, overwhelming aid groups on the other side.

Axel Bisschop of the U.N. refugee agency UNHCR told a briefing in Geneva that 31,000 refugees had already reached Sudan, surpassing a contingency plan for 20,000. “The new planning figure is around 200,000.”

“Our serious concern is if we do not act quickly with the resources needed...this could unravel not only Ethiopia but also Sudan,” he told the same briefing.

Ethiopia, a federation of 10 ethnic regions, was dominated for decades by Tigrayans in a TPLF-led ruling coalition, until Abiy, who is of Amhara and Oromo descent, took power two years ago. He says he aims to share authority more fairly. The TPLF accuses him of pursuing a vendetta against former officials.

The conflict erupted two weeks ago after what the government called a TPLF attack on army forces stationed in the region.

On Thursday, Tigray forces accused the government of bombing a university in the Tigray capital Mekelle. There was no immediate response from the government, although officials have said they are attacking only military targets.

A week ago, Tigray forces fired rockets at two airports in Amhara. They have also fired rockets into the neighbouring nation of Eritrea, which has a long-running enmity with the TPLF leadership. Eritrea made peace with Ethiopia in 2018, earning Abiy the Nobel Peace Prize.

Reports of ethnically motivated killings have emerged. Rights group Amnesty International documented a mass killing of civilians, many of whom appeared to be Amhara, by what it says were Tigrayan forces on Nov. 9-10. The Tigray authorities have denied this.

Refugees fleeing into Sudan have said they were targeted for being Tigrayan.

Since taking power, Abiy has freed political prisoners and loosened what was once one of Africa’s most repressive political and economic systems. But the new freedoms have been accompanied by violence as regional bosses vie for power, money and land.