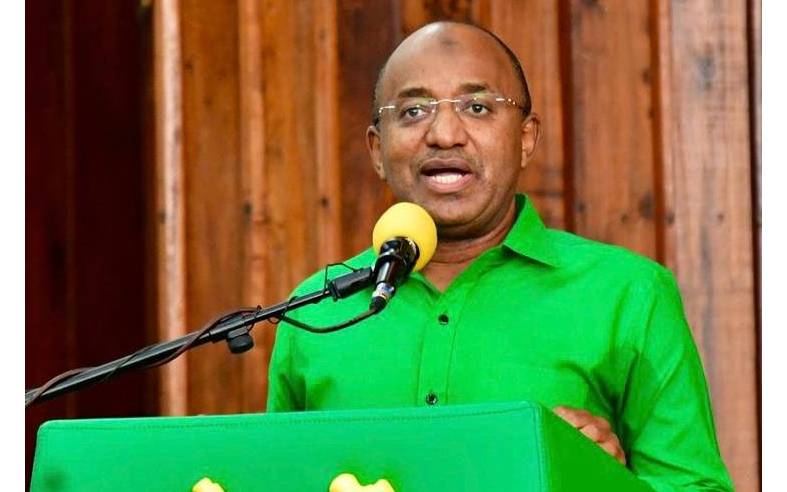 According to the Tanzanian press, Zanzibar Electoral Commission (ZEC) declared Mwinyi (pictured above) the winner of the poll after garnering 380, 402 votes, which equals 72.26 per cent of the total votes cast.

According to the local press, the archipelago has 566, 352 registered voters out of which 498,786 people turned up for the exercise making it an over 80 per cent voter turnout.

Dr Mwinyi, who vied under the ruling Chama Cha Mapindiduzi (CCM) squared it with Seif Sharif Hamad of ACT-Wazalendo and other candidates from Chadema and CUF.

He becomes the eighth president of Zanzibar since the region was established in 1964. Mwinyi served as a minister in the cabinet of President John Magufuli. The party tweeted thanking voters for voting him to take the helm of leadership.

"Thank you all people of Zanzibar for choosing CCM and for electing brother Hussein Mwinyi as the President-elect of the revolutionary government of Zanzibar," CCM party tweeted.

The region had been marred with chaos during the voting exercise after claims of rigging surfaced. On Wednesday, police arrested 42 people in Pemba and Zanzibar during the chaos.

Tanzania’s Inspector General of Police Simon Sirro told the media that those arrested were pelting police officers with stones as the law enforcers distributed voting materials.

"When the police were distributing ballot boxes, a group of youth started throwing stones at them but they were eventually arrested. So far there has been no death," he said.

The Tanzanian electoral body is continuing with the tallying and counting of votes amidst reports that the incumbent President John Magufuli is enjoying a commanding lead.

Lissu accused the government of using state machinery to manipulate and influence the outcome of the election.

“In line with the electoral laws, whatever happened yesterday was not an election. It was a gang of people who decided to misuse the state machinery and cling back to power," he said during a press conference in Dar es Salaam.

While condemning the violence witnessed in Zanzibar, Tundu called on the international committee to intervene and not recognise the results yet to be announced by the electoral commission.

"We urge the international community to impose sanctions against all commissioners of the electoral body, security forces officials and everybody who messed the election," he said.

The boat carrying 200 people sank a few hours after leaving the fishing town of Mbour, 100 km (60 miles) south of the capital Dakar

By Sam Wilkins and Richard Vokes, The Conversation | 1 day ago

By David Njaaga | 2 days ago