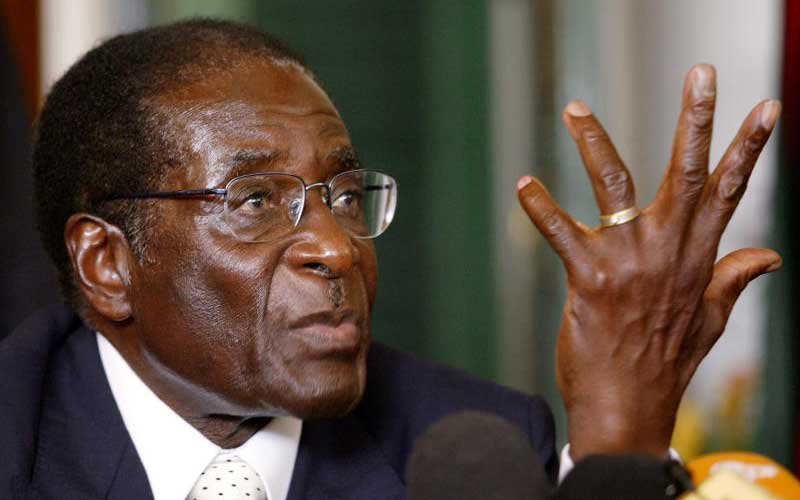 Zimbabwean President Robert Mugabe (pictured), who has died today aged 95, had a long history of making colourful or controversial remarks during a reign that has spanned nearly four decades. Among them: On staying in office  "Some are saying 'Mr Mugabe is old, so he should step down'... No! When my time comes, I will tell you." 2014 "Only God who appointed me will remove me - not the MDC (opposition), not the British." 2008  On coming to power  Mugabe's speech when Zimbabwe won independence was more conciliatory. "It could never be a correct justification that because the whites oppressed us yesterday when they had power, the blacks must oppress them today." 1980 On seizing farms  "You are now our enemies because you really have behaved as enemies of Zimbabwe. We are full of anger. Our entire community is angry and that is why we now have the war veterans seizing land." 2000  On Britain, Zimbabwe's former colonial ruler  "The British were brought up as violent people, liars, scoundrels and crooks... I am told that (former British PM Tony) Blair was a troublesome little boy at school." 2001  On gay people  "Worse than pigs and dogs... Those who do it, we will say, they are wayward. It is just madness, insanity." 2010 On gay marriage  "(President Barack) Obama came to Africa saying Africa must allow gay marriages... God destroyed the Earth because of these sins. Weddings are for a man and a woman." 2013  On Nelson Mandela  "Mandela has gone a bit too far in doing good to the non-black communities, really in some cases at the expense of (blacks)... That's being too saintly, too good." 2013 On Hitler  "I am still the Hitler of the time. This Hitler has only one objective, justice for his own people, sovereignty for his people, recognition of the independence of his people. "If that is Hitler, then let me be a Hitler tenfold." 2003  On Grace Before his first wife died in 1992, Mugabe started a relationship with Grace, whom he married in 1996. "I wanted children and this is how I thought I could get them. I knew what I was doing and my wife knew." 1998  On colonialism  "African resources belong to Africa. Others may come to assist as our friends and allies, but no longer as colonisers or oppressors, no longer as racists." 2015  On death  False reports of Mugabe dying were a feature of his old age. "I have died many times. That's where I have beaten Christ. Christ died once and resurrected once. I have died and resurrected and I don't know how many times I will die and resurrect." 2012.