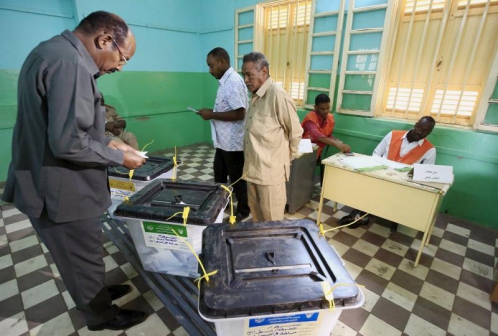 The Sudanese foreign ministry on Tuesday summoned America’s envoy to the country.

This was over Washington’s doubts on the credibility of an ongoing referendum on Darfur’s administrative status, the official SUNA news agency reported.

In a strong statement of condemnation, Sudan’s foreign ministry under secretary, Abdul Ghani al Naeem, told the US diplomat that Washington’s words contradict the ongoing peace efforts. “The US statement sends the wrong message at the wrong time, and come as the completion of a series of false American promises,” al Naeem was quoted as saying.

“A referendum is a civilised mechanism for people to choose from among multiple options and a good substitute for the gun as a means to achieve objectives and goals,” he noted.

Earlier, the US Department of State expressed serious concerns about the timing of the referendum.

The department’s deputy spokesperson, Mark Toner, said in a statement that the referendum could not be credible in the current security and political situation in the region.

“If held under current rules and conditions, a referendum on the status of Darfur cannot be considered a credible expression of the will of the people of Darfur,” he noted.

Voting started on Monday in Sudan’s Darfur in a referendum on whether to keep its current system of five states, or to render Darfur into a single region.

A total of 3,532,226 registered voters will have three days to make their choice at 1,420 polling stations in 65 localities, in accordance with the Doha Document for Peace in Darfur (DDPD), signed in 2011. The DDPD, which was signed between the Sudanese government and the Liberation and Justice Movement (LJM) in 2011, provided that the result would be included in the country’s constitution.

Major rebel movements in Darfur reject the referendum, demanding that Khartoum fulfills their demands of reaching a political solution with the armed groups and financially compensating citizens affected by the conflict

But the Sudanese government stressed that the referendum must go ahead according to the peace deal.

Previous article
Panic as TSC calls applications for 20 County Directors
Next article
Pregnancy made me hate my husband's voice, cooking