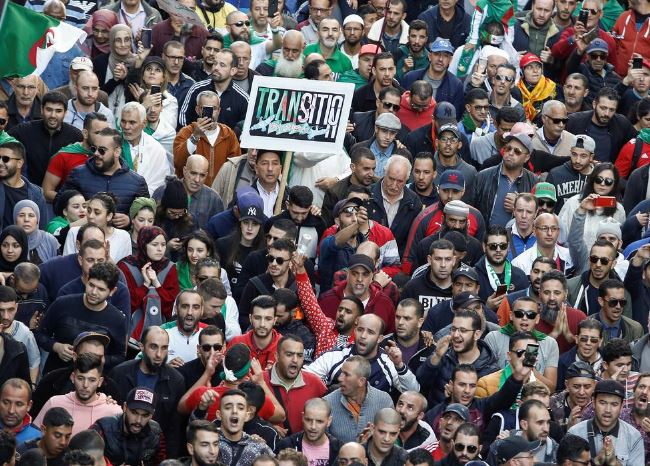 Tens of thousands of Algerians took to the streets on Friday, making a show of strength of their last weekly protest before a presidential election next week that they have rejected as meaningless. The protesters have been demonstrating twice a week since February to demand that the shadowy ruling elite that has controlled Algeria since independence in 1962 quits power. On Friday, they chanted “We will not vote” and held aloft banners reading “No need to prepare the polling stations” and “The people are fed up” as they paraded through central Algiers.

The army, the major force within the Algerian state, sees the Dec. 12 election of a new president as the only way to restore normality after nine months of demonstrations which in April ousted the veteran leader Abdelaziz Bouteflika. Protesters say any election is pointless if the ruling hierarchy, including the army, continues to wield power, and want it put off until more top officials step aside and the military quits politics. “We will stick to our position. We don’t care about next Thursday. We need change,” said post office employee Aissa Baha’i, 32. Later on Friday the former senior officials running for president will take part in a televised debate, Algeria’s first, but the protesters dismissed it as political theater. “We are used to hearing promises. I don’t trust them,” said Djamila Chabi, 37, referring to the debate.

Though the protest movement, which during the spring was regularly bringing hundreds of thousands of people to the streets, has so far been peaceful, there have been signs of growing tensions as the election nears. Earlier this year the authorities detained dozens of protesters for waving flags with Berber symbols as it began to put more pressure on the marches, and later sentenced many of them to year-long prison terms for undermining national unity. Late on Thursday, the security services accused a Berber separatist movement of planning to disrupt the election by using agents provocateurs among the protesters to incite police violence, saying a student in the banned group had confessed. The government has also arrested several opposition figures and journalists, charging some with attacking army morale. In recent weeks, protesters have marched more frequently and have also challenged the coming election by demonstrating against campaigning candidates and hanging bags of garbage in public spaces reserved for electioneering.

Meanwhile the government has sought to appease protester anger over corruption, arresting dozens of senior officials and former officials and businessmen, many of them associated with Bouteflika, and sentencing some to long prison terms. On Friday, state media also reported that thousands of people had joined marches in towns in western and eastern provinces in support of Thursday’s vote. “Change cannot be made with the old system’s men. This election is a waste of time,” said university student Noureddine Kadiri, 25, marching with his two younger brothers.