I’m up to the task, says woman ACK bishop-elect

The first woman to be elected bishop in the Anglican Church of Kenya (ACK) says she has what it takes to discharge her duties and meet the enormous expectations placed on her.

And to the history-making Rose Okeno, the bishop-elect of Butere ACK Diocese, the God who picked her as a minister of the gospel in the church will carry her through.

“He will enable me to perform my duties and I am ready to do diligently,” said the bishop.

Many will be keen to see how she performs the duties of the office that has been predominantly been a man’s job.

Ahead of her consecration today, Okeno said she will use her position to open up more space for women in the leadership of the church.

She told the Sunday Standard from her home in Butere’s Eshingubashere village that she is all set for her coronation after which she will hit the road running.

“I was a Christian Union leader in secondary school, where I also served as the head girl. I have preached and prayed for many people; men, women, and even children.

I have served the rich and the poor. I am also running my family well. I enjoyed a lot of victories during my formative years in ministry and I know more await me as I assume this office as the first female Anglican bishop,” says Okeno.

The fact that she does not have a woman in the church’s top leadership to look up to does not give the 57-year-old cleric sleepless nights.

“The God who chose me to be a minister will guide me through. I look up to Him,” said Okeno. 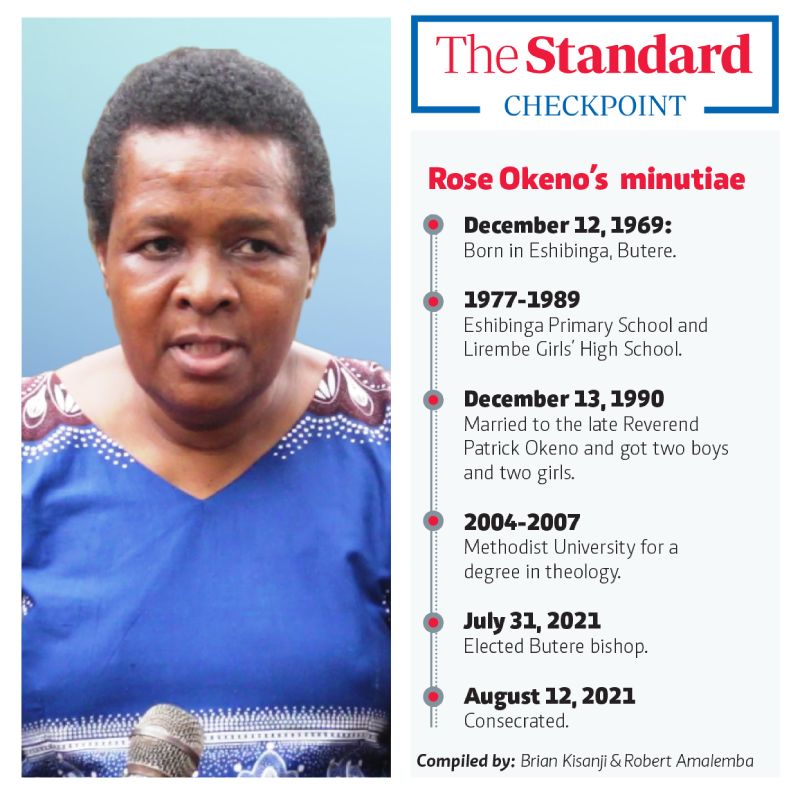 Okeno has held different positions in the church where she has served for the last 20 years. She trounced her two male rivals in the Butere elections in July.

“Many people were calling or texting to congratulate me, from Raila Odinga to Musalia Mudavadi. Neighbours too were not also left behind. I later realised I was spending a lot of time in conversations about my victory at the expense of prayers. This made me feel a bit uncomfortable. I kept off the phone and secluded myself and prayed and extolled the Lord who gave me the position,” she says.

Okeno added: “I call on women to celebrate my win with modesty. It is true that the Lord is blessing women all over the world. But I pray that as women, we will use the calling of God in our lives to glorify his name. I also ask our brothers to continue supporting us,” she says.

“There are many verses in the Bible to the effect that women should not preach but sit down and be taught by men. But the same Bible has many cases of female servants of the Lord such as Ruth, Ester, and Mary Magdalene. These scriptures teach us that ministry is not a preserve of any particular gender,” said Abungana, the bishop of Believers Ministry Church.

She has served as the Women’s Ministry Coordinator for seven years, Vicar General for four years and Diocesan Administrative Secretary for a year, in the Butere and Shikunga dioceses.

She has also served as the Archbishop’s Commissary for one year. Prior to her election in July, she was the Archdeacon of the Shikunga Archdeaconry.

In between her religious duties, Okeno obtained a Bachelor’s degree from Kenya Methodist University between 2003 and 2007.

Forests squatters lived in cold, segregated, and poorest communities and Muthee was determined to study hard to liberate his family.