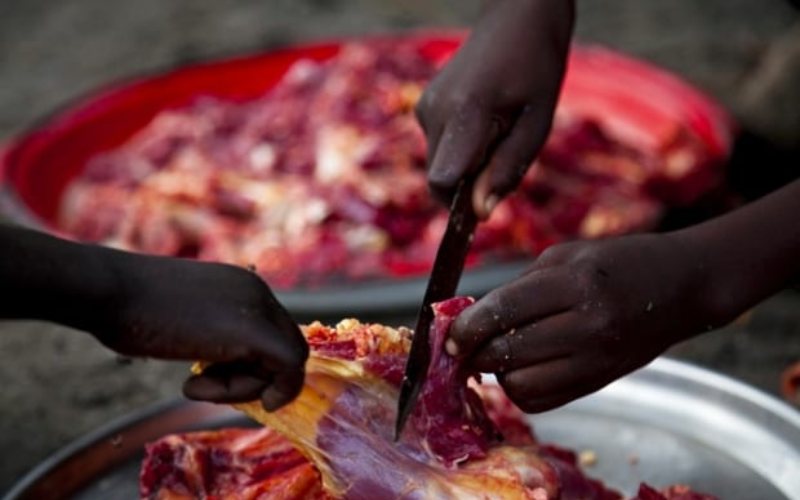 Eight people were on Thursday evening arrested in Kiminini Township, Trans Nzoia county, over the sale of contaminated meat.

Swift action by police saved what could have been a disaster when the officers impounded meat stacked in sacks and distributed to some butcheries in the area.

Three livestock traders reportedly bought a sick cow from a homestead in Matunda 5km away.

Kiminini OCPD Francis Tumbo said the traders bought the cow from a woman who allowed them to slaughter it at her compound before they carted away the meat.

“The woman was desperately looking for money to take her mother-in-law to hospital and she sold the sick cow to the traders who slaughtered at her home and carted away the meat in sacks,’’ said a resident of the area.

After they slaughtered the animal, the traders stacked the meat into sacks and ferried it to Kiminini where they distributed to some butcheries and some mutura sellers.

Officers led by Tumbo swung into action after they got wind of what was going on.

‘’Our officers moved with speed and intercepted the meat which had been sold to some people and arrested those behind it,’’ said Tumbo

There was drama on one of the main streets in Kiminini when officers caught up with a man roasting part of the meat and confiscated it.

Meat inspectors from Kitale who examined the meat discovered it was contaminated.

Tumbo commended the public for providing information over the meat adding that four suspects will be arraigned in court.

‘’We moved from one place to another at night to confiscate the meat. It could have a disaster if people consumed the contaminated meat. We released four people who were innocent and prime suspects will be arraigned in court,’’ he said.

Tumbo also issued a stern warning to those stealing livestock saying their days are numbered.

By Brian Kisanji, Juliet Omelo, Jackline Inyanji 2 days ago
Premium Where top Western leaders are expected to vote on August 9