2019 in review: The Kakamega twin’s saga that took country by storm

The Kakamega twins and their ‘sister’ who caught the nation’s attention for more than two months running have finally settled.

After the release of this year’s Kenya Certificate of Secondary Education (KCSE) exams, netizens took to social media to inquire how the famous girls performed in the exams.

Not known to many, the three girls, Melon Lutenyo, her twin sister Sharon Mathias and their ‘sister’ Melvis Imbaya opted to go back to Form Three due to the saga that came with too much media coverage which ate into their study time, prompting the parents to take them back to Form Three.

Speaking to Standard Digital on phone on Wednesday, Angelina Omina, Mevis Imbaya’s biological mother said her daughter and her have moved on after the rollercoaster.

She said she took her daughter and is now leaving with her at her Kangemi house, Nairobi.

She also said the saga ate the girls’ time and they decided to take them back to Form Three and that they will sit KCSE exam in 2020.

"We took them back to Form Three because the story dragged taking most of their study times,” she said adding that Mevis is now learning at one of the schools in Kangemi.

She said the girls are free to visit each other wherever they want because that was their wish.

“We cannot stop them from visiting each other, we have all accepted the reality and are living with it,” said Angelina who now operates a shop in Kangemi estate known as Mama Twins shop.

The three girls’ grabbed headlines from early April to late June following Melon and Sharon’s resemblance that made many, pending a definitive DNA test to the contrary, conclude they are identical twins.

The identity of the two girls did not only make news within the walls of their country but also across the border.

Having both been born on August 1999 in the same hospital, Kakamega County Referral, and raised in different regions, the events that reunited the two girls 19 years later is a classical case of a well-scripted movie intertwining destiny and coincidence. 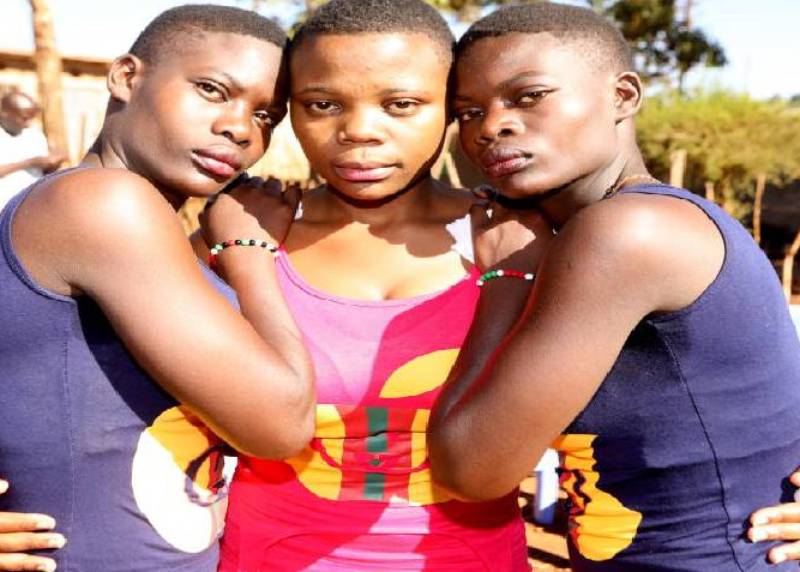 It is after Sharon, who was raised in Nairobi by Angeline Omina, joined Shikoti Girls Secondary school in Kakamega that the journey of the two meeting began.

For Melon, joining Kongoni Secondary School after failing to adapt to a boarding school life marked the journey of meeting her very possible twin sister.

After academic outings, classmates and teachers who met any of them could not understand how their student and classmate belonged to the other school.

Melon did not take the news of her resembling someone seriously. She knew she had a twin sister by the name Melvis but they were not identical to warrant comparable attention.

But the reports became persistence each day teacher and classmates mate Sharon.

It was until she received a picture of Sharon and her teachers that it dawned on her that the puzzle was real.

“When the teacher brought the picture to me, she placed it before me and asked me do you know this person? I told her, how can I fail to know myself? The teacher asked again, are you sure this is you?” Melon said during an interview with KTN on April 18.

“I told him this is not my uniform but it is me. After insisting it was me, the teacher opened up and said the person in the picture was not me but Sharon Mathias from Shikoti Girls. I could not believe it. It dawned on me that I have heard of this confusion before and began searching for answers,” she added.

During the holiday the two girls made efforts to look for each other. After several interactions, a determined and curious Sharon took a journey to Nairobi.

On arrival in Nairobi, Kangemi, the two had an emotional reunion that any long-separated identical twins can have.

When it was clear to both families that their appearance had all hallmarks of resemblance, a DNA test was needed to put things into perspective and to end the speculations.

A DNA test by Lancet Kenya on June 10 ended months of anxiety and speculation about the girls’ parentage by confirming the two girls are indeed biological twins separated at birth in 1999 at the Kakamega General Hospital.

This is a story that has had many twists, but thankfully it was conclusively finalised.

The families and the girls were however left to cope with the emotional trauma, to deal with.

The mix up that separated the twins at birth is a case of negligence at the Kakamega General Hospital which the Directorate of Criminal Investigations (DCI) vowed to unravel with many Kenyans saying families could be raising children that don’t belong to them as a result of such cases.

IDENTICAL TWINS SAGA: The tearful journey and how they discovered each other