The Sonko dynamite and how it all blew apart

The story of Icarius, the ‘bold in vanity’ Greek boy who flew too close to the sun and melted his own wings, does not even come close to describing the tragic political end of the Sonko phenomenon.

Fired up by populism and cheered on by allies who milked his brand of politics, Sonko rose in a span of eight years from a MP, Senator of the country’s capital county to the governor of the same city.

And as he progressed, his political head exponentially swelled. Everybody and everything became game to him. What he couldn’t deliver through wits and reason, he forced through brute force, insults and blackmail.

His antics had no limit; from the gold chains that weighed down all his physical faculties, the fake dreads that swept away the ‘sufferah’ nation, gold-laced car branding that dazzled the poor and the rugged jeans that amused the bourgeoisie.

He punched walls, chewed khat and seemed to get it right on appeasing all, except that he was not quite modest with his mouth. Through his antics, Sonko registered his name on voters psyche and easily scaled the ladder from Makadara Constituency to Senate seat in 2013.

He had barely learned the ropes in Senate when he set his sights on the next available position, the governor’s position. Unbridled ambition. Aware that a Nairobi Governor will never satisfy the needs of the city owing to the meagre allocations vis a vis the huge needs, he launched the Sonko Rescue Team to offer parallel services to city residents.

At the same time, he tried a cleansing act; shedding off the blings on his fingers, ears and neck. Deep down, however, Sonko remained Sonko.

He sold himself as the city's saviour from the grip of the elite few, the upper-middle class that aimed slightly higher than the basics of the city. In a way, Sonkoism preceded the later Trump phenomenon of the US where a politician closed his eyes on the “important few” and targeted the “neglected majority.” 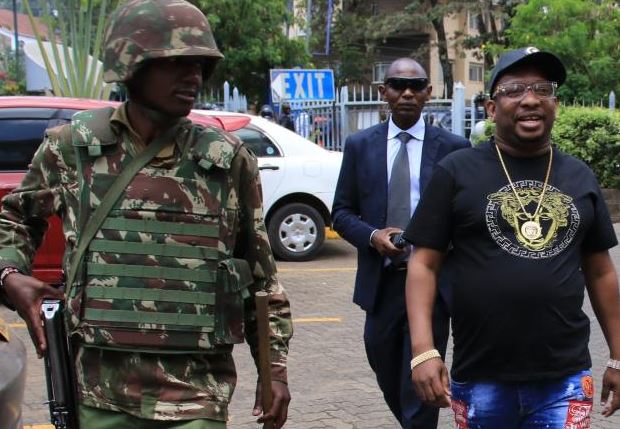 Sonko (pictured right) had zero interest in upmarket Nairobi, Nairobi ya kizungu mingi, never mind that among his first tasks upon election was to move “upmarket.” Unknown to the many who entertained him, Sonko had, like reggae King Bob Marley brought the ghetto up town.

The story goes that when Marley had exploded musically, and was crashing the charts in UK, he bought a house in “upmarket” Kingston between the island country’s official governor’s mansion and the Prime Ministers house.

Here, he whirled around rehearsing, puffing away with ghetto people, playing football and “reasoning” with them.

Sonko’s move to leafy suburbs of the city was not any different, except that he had no known celestial cause. He brought with him his ghetto hangers-on, who regaled at their success and abdicated their counsel roles.

Sonko’s 2017 vote was historic in more than one way. He scooped 871,794 votes, white-washing a moneyed incumbent Dr Evans Kidero, and becoming, probably, the only governor who got more votes than the president in a county.

To insulate himself from the shocks of rancorous reign at City Hall, Sonko surrounded himself with 'yes' men in all directions. His county executives and aides came out as soon as they came in, except those who could master the art of massaging his ego.

It was an open secret in Nairobi streets that you could not take a job offer in Sonko’s government unless you were ready to play ball, and be demeaned, often with the prospects of your private communication with him exposed.

Janet Ouko learnt it the hard way. She gleefully accepted a Sonko appointment as a County Executive. A few months later, she had quit, saying Sonko had been behaving as though he was married to her. Sonko responded by saying that she was corrupt to the core.

Others like Charles Kerich, owing to his training and experience as a journalist, became an expert in walking on Sonko’s tightrope, earning himself the “super CEC” or the “prime minister of Nairobi.”

Long before Kerich, however, Deputy Governor Polycarp Igathe had realised how difficult it is for anyone to satisfy a beehive. Day in day out, one must keep putting pollen and bees will never be satisfied.

During their campaigns, Igathe cut the image of a solemn no-nonsense executive fired wholly by high-end corporate values, and one who would perfectly complement Sonko’s rough edges.

That was until he settled down to work with Sonko and realised he had no clue.

He had barely settled in office when he discovered that picking Sonko’s calls was no mean feat. Soon thereafter, he began to dread his calls, and summonses.

From the analysis of text messages published by Sonko, one could tell the story of a petrified deputy governor who was wondering what he had gotten himself into.

“Million apologies. Was dead asleep and missed your call,” he moaned on November 5, 2017. Three days later on November 8 and as in several other instances, he was oozing similar regrets:

“I retired to bed way early last night. Just noticed missed calls last night. Pray all is well. I am en route to the office. And apology for missing your call boss.”

Igathe also soon realised that in the grand scheme of Sonko, he was too small. Occasionally, he had to draw attention to his own presence in the same events the governor was attending:

“Seated behind you to your left boss. Good to see you here. Igathe,” he texted at the burial of former Nyeri Governor. When it failed to attract a response, he fired another one: “Seated a row behind you. Good to see you.”

With this kind of subservience required of him, it did not take Igathe long to realise he had been dumped. With Igathe out of his way, Sonko fell into unmitigated stomp that took with him many victims.

He kept off his office, claiming that some people were after him. He would summon his cabinet to his Mua Hills home for official meetings. When he bounced back, he littered the city with stuffed lions, and City Hall, the official seat of his power, transformed, by a lot.

“In the middle of a serious discussion, he may remember that he was to send someone money, picks his phone and starts giving instructions to the person on the other end. You have to wait for him to finish,” one of his CEC’s told a newspaper reporter.

Tales of a governor imbibing Cognac as early as 10am and camouflaging them with apple juices abound. They should have raised the antennae of the mismatch between the office and the holder but all, including the powers that be, were hooked on the Sonko brand to care.

They claimed that his confidence level increased the more he enjoyed himself and as the attention, inversely, decreased.

“When you take, say, 10 issues to him, by the time you are on the third item, he has lost concentration. He will begin checking his WhatsApp messages or log into Facebook for updates on things that are trending. The moment you see that happen, you will be wasting your time if you continue talking to him,” a source told a newspaper in the early days of his reign at City Hall.

By November last year, Sonko had, apparently, hurt too many people to be spared. The following month, he was cornered on the plains of Voi, running away from the law.

He cursed, wailed, spat at and beat anyone he could lay his hands on as he fought off an arrest, before he was bundled in a chopper and brought back to Nairobi.

“Evidence of struggles were abundant at the airstrip. Sonko, who was in a white T-shirt and a black tracksuit and grey slacks, was sweating profusely, his jumpers stripped to his waist. His right shoe was missing as he was forced onto the helicopter,” newspaper reports indicated.

Therein began Sonko’s downfall, with one thing leading to another. Besides the court case weighing heavily on him, Sonko was curtailed at all sides. He couldn’t even do the thing he loved most; firing his CEC’s.

He fired a blank shot on his favorite CEC for Finance and Economic Planning Pauline Kahiga. This would probably be his Damascus moment, for he realised he had transformed into a paper tiger.

The Saul heritage was too much to bear for him, and he had to become Paul.

By March this year, with a load too heavy to be sustained by the Sonko brand, he drove himself to State House, and signed away core functions of his government.

Some people have described it as a political masterstroke. Others have called it "devolution upside down", another Sonko first.

“Our clueless governor signed away those services. He admits that he was clueless. As a voter in the city, I don’t even want to know whether he knew what he was doing or not. It is just a huge relief,” commentator Barack Muluka wrote.

While county governments had over the years whined that the national government had refused, delayed or dithered in transferring the devolved functions, Sonko devolved the same upwards.

If it could buy him favour and a clean slate why not?

If he thought he had appeased the gods, he was so wrong. They were not done with him yet and he would be wailing all day/night long. He soon thereafter realised he had been conned. 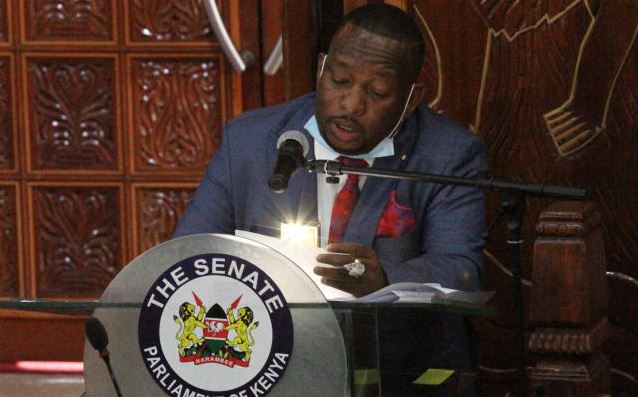 Sonko (above) re-launched himself into a 'wailing' governor, taking more in motivational quotes than in delivery of county services.

The political heartbreak was earth-shattering. He found a new punching bag in the man who took charge of dockets he signed away, Maj-Gen Mohamed Badi, describing him as “Saddam Hussein”.

Like the Biblical Rachel weeping for her children, “for they were not”, Sonko descended onto a new low:

“After being conned of the money of the non-transferred functions I have done thorough research on the law. Sasa ma-broker wa State House who sneaked in their fake budget to steal what belongs to us tukutane kotini.”

He took onto the Bible for consolation: “For you equipped me with strength for the battle; you made those who rise against me sink under me.”

There was no stopping the fall of the Sonko dynamite.

Two weeks ago, the county assembly impeached him. And when he walked out of the Senate minutes to midnight on Thursday, Sonko was but a shell of his former self, stripped off his powers. The old Hamlet’s truth about “sponge” officers came through:

“Such officers do the King best service in the end; he keeps them, like an ape, in the corner of his jaw; first mouthed, to be last swallowed: when he needs what you have gleaned, it is but squeezing you, and, sponge, you shall be dry again.”

Inside Uhuru, Raila plan for Nairobi