From selling mitumba to benga kingpin 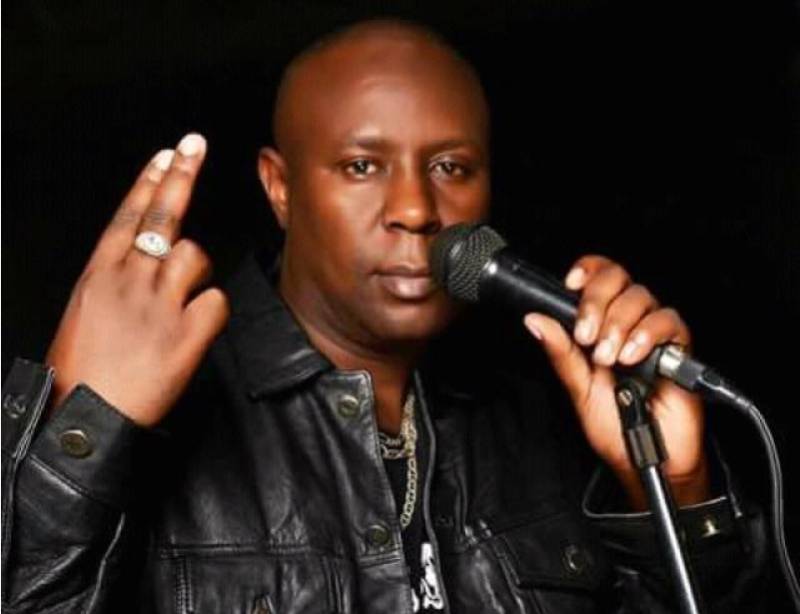 Usually reserved when it comes to giving media interviews, Ken wa Maria (pictured) is more open on the day we sit down with him. “Ask me everything you would want to as I am here to give you all the time,” he says as we settle down, his face still dripping with sweat after an energetic performance.

“I honestly don’t like interviews simply because most writers don’t bother to do their research and have no background understanding of artistes. They will ask you what is obvious, what has been written before, what everyone knows…so why bother,” he starts.

He sips from his glass and takes a breath as if to make an interlude between a refrain and the next stanza. He looks youthful, you wouldn’t tell that this is an artiste who has been there and done it all in the last two decades he has been in the game.

The Rolex watch on his hand, trendy white rugged pair of trousers and labelled red top attest to his love of class and the fine things in life. And he has worked hard for them, “it’s been 17 years you know!” he says. “The Kamba ideology of fashion that people have is for the olden days. This is the modern age. Besides, fashion is personal, and not even about the music you make or the tribe you come from. My fashion inspiration began with thrift shopping in Gikomba market where I could get original classy wear that would be unique just to me. I hardly shop in ordinary mall stores where you get what everyone else picks…You know ‘Kenyan uniform’. In this life and trade one has to cut their niche. A look can be everything for the next business,” he says.

Indeed, Gikomba is where his whole hustle started. He ventured into the second-hand clothes (mitumba) trade to make ends meet, before he secured a job as a factory casual labourer – all before the big music breakthrough.

Ken wa Maria takes us down memory lane on benga music, which he says can be traced to cultural origins dating back to 1940. Then, it was about Soukous, South African Kwela, the Congolese finger-style guitar as well as Cuban dance music, all of which heavily influenced the Benga.

By 1960, the Luo had established the nyatiti before the Kambas hit it up with a fast rhythmic fusion of guitar act. It was the age of the LP in which the likes of Kakai Kilonzo and Peter Muambi thrived. That sounds as ancient as ‘The God’s Must be Crazy’ or closer if we may the arrival of ‘The Locomotion’.

Then came the Kamba music bands among them Kalambya Boys, Katitu and Kimangu. And here was Kennedy Wambua Ngunze, for that is Ken wa Maria’s real name, occupying and running in the space with his Yatta Orchestra, formally Yatta Boys Band.

This group had some oomph, but the same could not be said of their music videos.

Everything looked grainy as if filmed against the midday sun. It was everything fused together at the speed of light, literally, the music beat raced against time and adrenaline.

Born to sing, the Fundamentals hit maker had been watching from the periphery and practicing behind the scenes, as Kamba artistes battled for regional supremacy.

Claims of witchcraft hung over the industry like a dark cloud, every misfortune befalling an artiste was quickly pegged down to this.

Ken wa Maria says he knew something needed to change when it comes to the benga beat, how artistes approached music and how fans consumed it. Having seen many die poor after living on the fast-lane that is showbiz, he wanted to approach music more professionally.

“It hit me that education was key in all this. That is why I decided to pursue education beyond high school, the level all the rest seemed to have dropped out. After attending Gitaraka Primary School and then Kangaru School in Embu, I proceeded (for) higher learning. It is a long story that came with many ups and downs but the short of it is that I have attendant St Paul’s University, Strathmore University, USIU-Africa and a UK University for my undergraduate and postgraduate levels,” says the man from Machakos.

He might not have a fight with the much-hyped firebrand regional singers such as Kativui Mwene, Ben Mbatha, Kyaume Boys Band, Kitunguu, Alex Kasau Katombi (Nguuni Lovers Lovers Band), Alphonse Kioko, Maima (Kithungo Raha), Kathekani and Muasa Kineene;  but he hardly discusses them, opting to remain the silent kingpin.

Besides, he has been the springboard for most of them as he is credited for starting the modern day Eastern Benga movement, in which he has coached more than 40 artistes. Even when some try to hit out at him through diss-tracks – a game he can be a master off, he rarely, if ever, ‘claps back’.

“Education gives you knowledge and wisdom, as well as confidence. You become strategic and most, if not all, of your decisions are informed by your goals and long term vision. That way, you don’t let sideshows bother you.

“I know exactly who I am in the industry and where my music and business careers are taking me. My legacy shall be a witness to this,” says the Kavuku Kaingiw’e ni Nzou singer, a rhetorical story of the hare and the elephant – metaphorically directed at wannabees who are pulled up by their friends but soon forget that they need those around them.

“No one held my hand in the musical scene on my way up. I had to work my way up and even did a deep documented research, a 1,500-page report that directed what benga is today. I advised on how to slow the Kamba music beat, made it friendlier, danceable and enjoyable. Back then, the old rich boys could not dance to the fast beat and so the market value for artistes was low.

“There was no discipline among artistes too and so I had to introduce some grooming. Now, artistes are playing their music uptown and those who are smart are making good money through corporate (firms).

“I walk with a feeling of gratification and a posture of an achiever. I feel I’ll be remembered for some generations to come.”

With about 500 songs recorded and enjoying massive airplay as well as online downloads, Ken wa Maria, who enjoys his Tusker or Black Label whiskey while generously treating fans and friends, has invested heavily in music.

He has penned songs in praise of Barrack Obama and Lupita Nyongo, floods, diseases and world catastrophes.

His latest project is called Corona, as would be expected.

“My latest album is Kelitu ka Corona, an instalment that has eight songs. It is themed around the corona pandemic and how the pandemic has affected lives and the way the world operates. I am in the process of shooting the music videos.... Calamities offer opportunities and music can address any situation on earth,” he says with a grin.

Turning adversity into success has been the hallmark of his success, since when he started off singing in a Catholic Church back in Yatta when he was young. He says through music, he acts as a mouth piece for many – addressing societal issues from social engagements to thorny political dilemmas, especially those touching on his community.

But not all of his songs have earned him praises. Being the politician he his, attempts at  delving into political battles in his home county of Machakos and some lyrics to his songs have left him politically and musically bruised and with sworn enemies.

In 2013, the singer became a key strategist in Kalonzo Musyoko’s presidential campaigns. He was also quietly being groomed for active politics.

Come 2017, he had his sights set on a seat at the Machakos County Assembly after winning the Matuu Ward Wiper ticket. Then he had fallen out with the Machakos Governor Alfred Mutua – who had now formed the ChapChap political movement and begun to wrestle Kalonzo’s Wiper party for control of Machakos.

The intricacies that followed were going to be Ken wa Maria’s political undoing. Unknown to many, Ken wa Maria had been appointed into the Machakos Country music, culture and the arts board Machawood alongside other influential personalities – mostly in the creative industry.

After a short stint, Ken wa Maria resigned from the board, and many believe that that that is where his split with Alfred Mutua started. At some point, the musician was arrested and for long, he was barred from performing on any stage in Machakos County.

“When Machakos County government came into being in 2013, I was part of the government. (Governor Alfred) Mutua was in Wiper Party but since Kalonzo Musyoka was the party leader, I always followed what he said and his word was that I support Mutua for the governorship. My resignation from the Machawood board had to do with me focusing on business. The differences that were playing between him (Mutua) and Kalonzo adversely affected my political fate. I lost the 2017 elections for that reason,” he says.

“I never gave up. I am running for the senator position in Machakos come 2022 and I know I will triumph. I have teamed up with the right people, I have the connections, the papers, the numbers and financial muscle not to mention the leadership skills and will to be a people’s servant. The time is now here,” he says.

Taking another sip, Ken wa Maria’s face lights up as he launches into another animated interlude. The camera clicks and he gladly swings with ease to every requested pose. In-between ,he cracks a joke, asking if he should try a hand in journalism.

We inquire how much he is worth, his taste in cars and when he would retire from music. Word is that he has investments in the Coast and that he runs a trucks freight business across East Africa.

“Now you want to write a whole book about me I can see, but why not. Good ground work,” replies the father of two.

“For now, what I can tell you is that I run an automobile business and do business across the region. Besides, I have been selling cars for the last 15 years, that is basically almost all the time I have been in music. I also do poultry business, working with farmers and traders across counties. I have some businesses in Malindi and a few clients there whom I check from time to time,” he says, guarded.

“You guys do know what I drive, a number of sports cars. A man has to enjoy his sweat so I do my leisure holidays in Dubai and mostly Germany where I have my other interests. That should be juicy enough,” he laughs.

As for when he thinks he will hang his boots, he says: “I am a very open person when it comes to building on my vision and if Koffi Olominde, who is 64, is still making music, why can’t I keep going?”

Parenteen: How to handle a moody teenager

While the urge to treat them like babies is always there, it is important to understand they are now able to start making some decisions.