From escaping marriage at 9 to being ‘serikali mashinani' 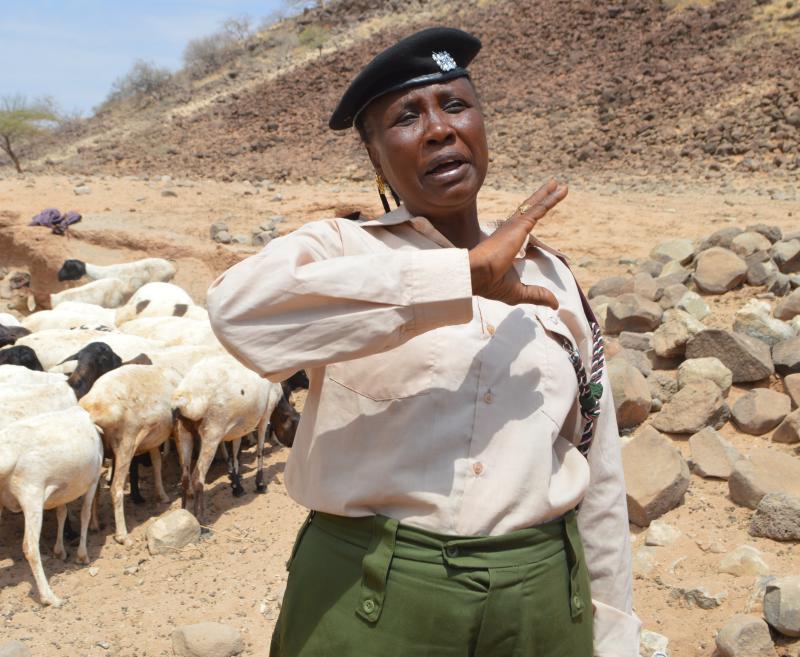 Mariam Lengure’s dream has always been to empower girls and women in her Rendile community. These women include victims of cultural practices and forced marriages.

She knew this was only possible with a proper education. However, Mariam soon found herself victim of the same practices she hoped to fight someday.

That today, Mariam is the assistant chief of Hafara in Laisamis, Marsabit County, is no mean feat. She says it has been a difficult journey.

“I consider myself lucky to be an administrator and with the support of government, speak authoritatively, championing the rights of women and girls; creating awareness against female cut, child protection, early pregnancies and child marriages in my community,” Mariam says.

She involves local women who have succeeded in education and careers to share their stories of struggle and triumph in an effort to inspire girls to take education seriously.

She says: “Here, culture still doesn’t allow women to move near barazas. Having been born and brought up in this culture, l was very shy and timid initially, but gathered courage with time, especially after the elders encouraged me to talk with authority since l was a leader.”

Though early marriages is still a problem in the community, Mariam says she is getting a lot of support from organisations such as World Vision Kenya.

Mariam was nine when her father planned to marry her off. She was first beaded to prepare her for marriage. Then, she says, she lived with Nasulani Lesurnat, a neighbour, after her step-mother mistreated her.

She says her host, Nasulani was furious after learning her father had planned her marriage, yet she was bright pupil then in Class Two at St Teresa’s Primary School in Marsabit.

Nasulani confronted her father who insisted Mariam was his child and he could do as he wished.

Meanwhile, Mariam was pleading with her host to stop the marriage and help her continue with schooling. She still had the beads around her neck signifying she was to be married soon.

Stung by Mariam’s plight, Nasulani removed the beads from her neck and sneaked her to the headmaster of St Teresa’s Primary School. It was two days to the forced marriage.

Mariam says: “Nasulani explained to him about the planned forced marriage, and struck a deal that l live with him as she sought an alternative.”

She says her father never got tired of making marriage plans. He even wanted to abduct her from school. “My father had already pocketed bride price and was determined to deliver me to the man,” she says.

Nasulani, in talks with the headmaster, secretly organised for her transfer to Korr Primary School in Laisamis, over 90km from Marsabit.

“In Class Three, we were seven girls but only three of us completed primary. Others were married off along the way,” she says.

She sat her Class Eight exams 1986. After more than five years away from home, Mariam thought her father had forgotten about the marriage plans and would now support her education. She was wrong!

Immediately she got home, her father accused her of destroying his relationship with the man who was giving him wealth in bride price.

Her pleading to be admitted to secondary school fell on deaf ears. Instead, he told her she was big enough to prepare for marriage. This was rude shock to Mariam. Nasulani who had protected her earlier had moved to another town.

In two months after returning home with KCPE results, Miriam got beaded and hurriedly married off in 1987 to a different man.

She recalls her father getting eight camels as bride price. She was 16 when she got married to the man in his early 40s. To her, this was a better and younger man than the first one. They lived as couple till his demise in early 2017. They had eight children - four girls and four boys.

“The man loved me and was very supportive in anything l wanted. He was not concerned much about culture,” she recalls.

In 1995, Miriam landed job as translator at Don Bosco Mission Hospital in Korr, because she could speak Samburu, Rendile, Boran, Swahili and some English.

“I translated Samburu, Rendile, Boran into Swahili and bit of English to missionaries working at the health facility and couldn’t understand local languages,” she says.

It was during outreach programmes as Mariam interacted with the elders that they advised her to take a leadership role in the community.

“They appreciated my inroads in the community with medical officers on outreach programmes and also with organisations to empower the community. They told me though l was a woman, l could make good leader,” she says laughing.

Coincidentally, vacancy for an assistant chief was announced in a neighbouring sub-location. She applied but a local politician barred her application.

“The MP met and warned me that elders had erred in endorsing me as leader yet as a woman I could not address men in barazas. Few days later, l was told my documents had disappeared and the chance was given to another person,” she says.

A year later, there was a vacant position in another area. Unrelenting Mariam applied, the same politician, she says, learnt of it and confronted her saying her place was in the kitchen.

However, this time Mariam was shortlisted and called for an interview. She got the job.

The politician fighting her, she says, was furious after learning she’d been appointed the assistant chief. “A week after crowning, l got letter saying l should not work till some investigations are done.

For three years, l waited for investigations that l wasn’t sure of. I sensed foul play by the politician and traveled to Marsabit where l shared my predicament with equal rights activists who promised to intervene,” Mariam says.

Later, female rights activists escorted Mariam to the provincial administration offices at Nyayo House, Nairobi and found out somebody had claimed she had a criminal record, and therefore, not fit to hold office.

“Everybody there was shocked that l had a criminal record. Though we were not told who was behind my tribulations, I was however given my job back, and got the salary for the three years l was kept waiting,” she says.

After getting the job, elders blessed her and gave her a traditional seat and a stick that gives her authority to speak and address the community. They also warned the politician to leave her alone.

Mariam says her work hasn’t been a walk in the park six years down the line. Matters are made more challenging by the fact that she handles a large area and has to ride on a motorcycle to attend to matters in the area.

“Sometimes, l just pack my clothes and foodstuff and set off for two or more days as l monitor what is happening in my area and talking on empowerment,” she says.

Met her mother in adulthood

Mariam says her mother was beaded and forced into marriage with an older man.

A few months into the marriage, Mariam’s mother realised she could not cope with her husband who was around 70 years old while she was still a minor. After consistent protests, some elders agreed that she leaves the marriage.

However, since the old man had paid bride price in the form of cattle worth hundreds of thousand shillings, they agreed that she must have a child with the man.

“That child, is me,” reveals Mariam, saying her mother ran away from the old man’s home while she was seven-months-old. She traveled back to Merille where she was born.

Mariam says she had always wanted to meet her mother.

“Luckily, I met her for the first time in Laisamis town, in 1993. At that time, l was married and I had three children.”

She couldn’t recognise her daughter.

Mariam says her mother told her she’d been crying for years over the child she abandoned in Marsabit.

Previous article
Keto diet: Why some feel fatigue, nausea, headaches after starting it
Next article
Is a colleague’s negative attitude rubbing off on you?