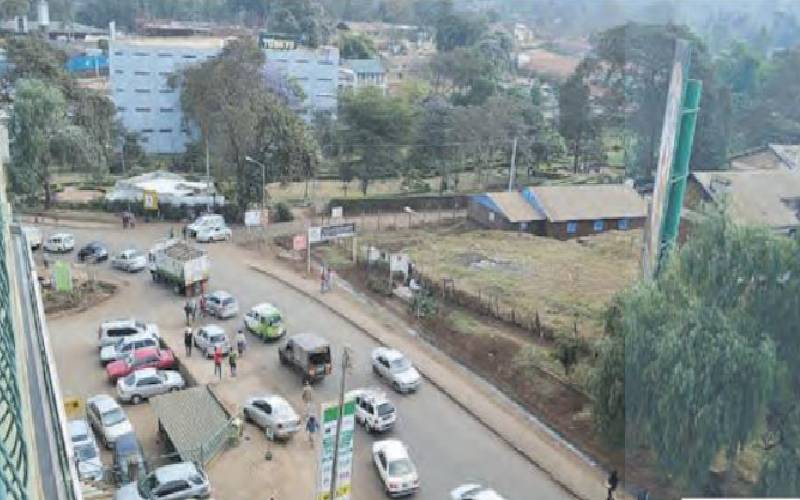 Are you intending to buy land around Meru town? Forget it for now because only a few people are willing to sell.

Demand for land here has always been high, meaning there is always a shortage of land for sale. Blame it, too, on surrounding road construction projects that will see an astronomical rise in value, and most landowners are waiting for a kill.

There is the Western bypass snaking more than eight kilometres from Gikumene, off the Meru-Chuka road, cutting through Giantune before connecting with the Meru-Nanyuki highway at Gitoro in the Makutano area.

Then there is the Eastern bypass of more than 12 kilometres, which starts at Gikumene, then passes through Mati and Meru-Mikinduri roads before connecting to Meru-Maua road at Kaithe.

Minor and accomplice charged with theft while wearing police uniform

These two major bypasses have opened the neighbouring areas to increased business opportunities. But landowners are not selling, at least for the time being, forcing potential buyers to search elsewhere.

Doreem Mugira, a businesswoman, says the available land is near town.

“It is only near Meru town where you will find an eighth of an acre going for as much as Sh3 million or higher. Finding a seller is like looking for the proverbial needle in a haystack,” Mugira said.

Charles Mutwiri, who owns parcels of land including Mukarimu Coffee Estate around Meru and surrounding areas, told The Nairobian growth in the town’s centre, the expansion of roads, which is coupled with people from other counties streaming to Meru to live or do business, has mainly contributed to the high prices of land.

“Meru town has expanded for business and its people are hospitable in nature. Everybody wants to live and do business here, so the prices of land have gone up exponentially. The two bypasses around the town, which were done to decongest traffic, have also catalyzed the rise in the value of land,” said Mutwiri.

Meru town is situated on the slope of Mt Kenya and is endowed with beautiful weather, which is attractive to investors leading the steep spike in prices. Ordinarily, a quarter-acre along the bypass goes for an average of Sh3 million.

Even rent has gone up. Monthly rent for bedsitters ranges between Sh5,000 and Sh7,000 along the bypass and are pricey heading closer to Meru town.  But Mutwiri said there is always a willing buyer as long as the price is right.

“If you have the money and want land even in London or Nairobi central business district, you will always get it,” he said.

Not only is there a scarcity of land to buy, but the few willing sellers have placed a high bounty on their priced asset.

Newly minted county millionaires, out to buy land, are finding it near-impossible getting affordable space to erect residential and commercial properties anywhere near Meru town. Even those who have made millions winning tenders with the national government are hard-pressed to convince the majority of elderly owners to sell. Most have declined the offer or the land is very pricey.

Beverly Kagwiria, an insurance agent in Nairobi, wanted a parcel near Meru town for single residential rooms to let but was shocked when an elderly owner offered only an eighth at Sh3 million.

“I had a budget of Sh7 million to buy an acre near Meru town, to put up my own home and use a parcel for rentals. But I was not prepared for the shock when the old man mentioned the selling price,” said Kagwiria.

Mwenda Murerwa, the director of Ajogi Properties, argues that prices of land in Meru are escalating because parcels of land already sold in the last few years were owned by young people, who had gained it, but now the remaining parcels are owned by the elderly who are not willing to sell.

Murerwa said though prices around the town have ‘stabilised,’ personal attachment to land has also contributed to the high price tags and it’s “the older generation”, who have this sentimental attachment to the land.

He traces the high prices to easy loans banks offered between 2015 and 2017.

“Then people were also doing business with counties (governments) and had money to splash around on land,” he said.

Charles Mutwiri reckons the reasons for not selling goes beyond having sentimental value to the land.

“What I’m I going to do with the money, buy a car?” he poses. “As elders, we acquired the land with difficulty. It is our children who are mostly selling land in Meru town. There are children who inherit the property worth Sh80 million in Meru and decide to sell and divide the income, to go buy cars, go on holiday and other things.

“It is not the old people who are selling but the young people who inherited it. I have land and I am not selling!”

Mutwiri is also afraid of giving his children their share because they might sell to invest in other businesses.

“We are giving our children plots and they are selling them for Sh4 million,” he added.

Mwenda Murerwa now encourages interested buyers to move away from Meru town and search for land slightly at the edge of town in areas like Gitimbine, which has become a commercial area and where a quarter acre is selling at Sh2 million. But about a kilometre from Gitimbine is Gikume, where one can get an acre for Sh7 million.

Murerwa adds the corona pandemic has brought down the price of land and banks are not dishing out easy loans. There are other factors like reduced incomes, job losses and business failures, which have eased demand on land. There is also less liquidity in the market, which has reduced the demand for money, hence the price stabilisation.