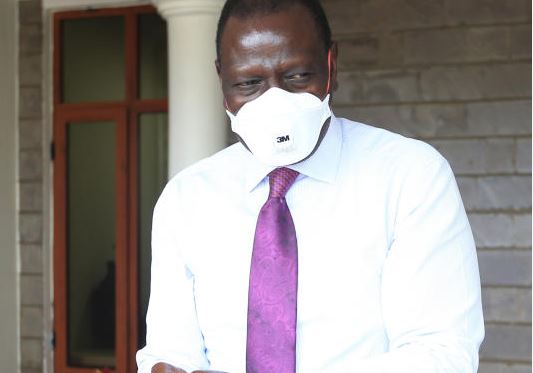 Talai Clan elders who hosted Deputy President William Ruto (pictured) to patch up things in the Nandi traditional way on Friday morning have opened up on their two-hour meeting with the country’s Number Two.

Speaking in strict confidentiality, the elders said apart from his ongoing political problems, they had their separate and long-pending grievances with the DP which took the better part of their time with him.

The elders are the descendants of the Orkoiyot Koitalel Samoei, who led a 12-year rebellion against the colonial invasion before he was duped into a peace meeting and shot dead in 1905 by a young, overzealous British military officer Captain Richard Meinertzhagen.

“We poured our hearts out, including on missing out in government posts since he took over leadership mantle in 2013 and generally neglecting the clan that blessed his ascendancy to the top,” stated one of the elders.

They said given that it was a rare moment to have with the DP humbly seated among them, they censured him for neglecting their clan, whose political misfortunes in the colonial era saw them banished to Gwasi, Homa Bay County.

“He acknowledged the challenges and asked for forgiveness, promising to complete the stalled upgrade of Chepterit-Kaiboi and Sironoi-Baraton roads the Government initiated in 2014,” quoted the source.

The council of elders accepted his atonement and proceeded to crown him with the coveted animal skin known as sambut (leadership gown) and two batons.

“He was handed a sharit (leadership baton) and a rungut (hunting baton) while seated on the special three-legged stool, surrounded by religious leaders and the council of elders,” the source revealed.

The source further stated: “We didn’t want to be hard on him since he has problems in government. We simply forgave him and wished him well in his endeavours,” said the source.

Reverend Peter Chemaswet, a cultural historian, told Sunday Standard that the occasion was significant given it entailed the blessings of elders.

The blessings signify respect and authority to lead in various aspects of life, he said. Being a Sabaot, Chemaswet said he cannot speak much about Ruto’s anointment since it was done by Nandi elders.

According to an elder of the Talai clan, the event was a private affair and there were strict instructions against revealing anything to those not invited.

One of the elders who administered the cultural ceremony said the clan had sought an appointment with Ruto six months before the Friday meeting. The dawn ceremony was closely guarded, only left for performing elders, the anointed leader and a few members of Ruto’s age set.

Ruto was ushered into a special house that had been set apart for the anointment.

“It was a strong cultural tradition initiated by seven elders all aged above 60 and from all the five sub-clans of Koitalel arap Samoei’s Talai clan. All the elders were seated in designated positions near a fireplace while Ruto had a special placed reserved for him,” he said.

Ruto made his parliamentary debut in 1997 by trouncing a member of Talai Clan, William Saina.

According to one of the elders, Ruto will now turn the tables on his enemies, and that those fighting him politically will now scatter. While the meeting stirred the debate on the blurred line between Christianity, which Ruto professes, and Nandi traditions it also laid bare the rugged journey that characterises the search for the presidency and the place of culture in t mix.

Kenya’s four presidents, it emerged yesterday, have had an interaction with the Talai clan of the Nandi community. Kenyatta, Moi, Mwai Kibaki and Uhuru have all had personal interactions with the elders either before or during their presidency.

On December 12, 1963, Sirian Manyei, the son of Koitalel Arap Samoei, met Mzee Kenyatta during the hoisting of the Kenyan flag at Uhuru Gardens after the country attained independence. It’s not clear whether there had been some interaction before or after according to historian and author Godfrey K Sang.

Sang said that on July 26, 1969, at Kamatargui village in Kapsabet, Nandi County, then Vice President Moi had a meeting with the Talai elders that went on all night. The organisers, he says, were ex-senior Chief Joel Malel and the former chairman of the Nandi African District Council Isaac Kosgey and Paul Kiplimo Boit, chairman of the giant Sirikwa County council.

It was attended by the then DC Mr J Waiboci and MPs John Kipruto Cheruiyot, Tinderet MP Marie Seroney and Mosop’s Gerald Kalya. The event at Kamatargui village involved the slaughter of a goat whose innards were used to predict Moi’s fate.

“Very early in the morning just before dawn after the nightlong ritual, the elders announced that Moi’s future was bright,” Sang said.

Kipchoge Arap Chomu, a Nandi elder, said when Kibaki took power, he went into history books as the first president to officially recognise the Talai community.

“He officiated over the centennial commemoration of Koitalel when he ordered the putting up of a Mausoleum in Nandi Hills town, an institution of higher learning and a cultural centre/museum to honour the fallen hero,” said Arap Chomu.

On October 19, 2017, after the Supreme Court nullified the presidential election, Uhuru met with Talai elders at Nandi Bears Club in Nandi Hills in a closed-door meeting.

[By Jacob Ng’etich, Titus Too and Edward Kosut]

Previous article
How to look presentable in virtual meetings
Next article
Pregnancy made me hate my husband's voice, cooking