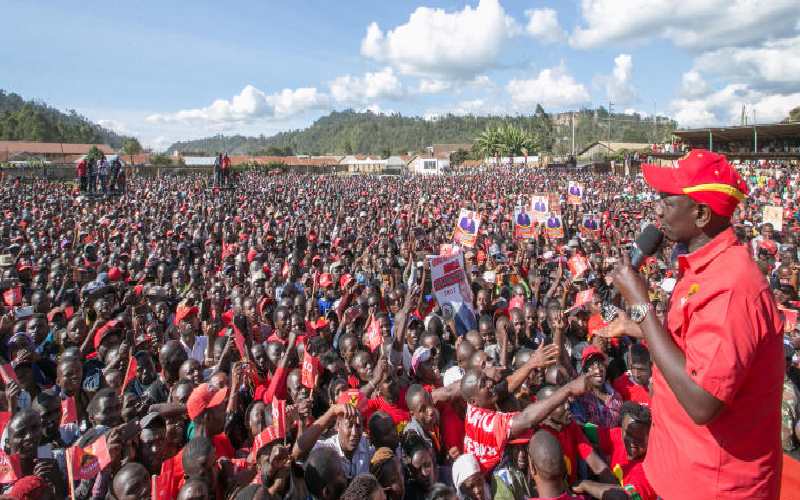 There is no doubt that the political fortunes of Deputy President William Ruto are dwindling.

This is evident in Rift Valley and Mt Kenya, where some politicians are gleefully enjoying the onslaught on Dr Ruto’s camp as rivals cut him to size.

Former Tetu MP Ndungu Gethinji said Ruto deserves what was happening to him.

He recalled how Jubilee Party Vice Chair David Murathe publicly stated that the DP had a hand in the kicking out of party leaders aligned to President Uhuru Kenyatta in the party primaries.

“His (Murathe’s) statement as a JP leader confirmed the suspicions of leaders that the DP was behind our losses in the primaries,” said Mr Gethinji.

Mwiti Kathara, who unsuccessfully vied for the South Imenti parliamentary seat on Jubilee ticket, claimed that the election was rigged. He accused the party’s national office of collaborating with county officials to manipulate the results.

Former Maragua MP Elias Mbau voiced the frustrations of politicians who were victims of the Jubilee Party nominations fiasco.

Mr Mbau claimed that a section of Mt Kenya leaders lost their political bids after the national office interfered with the nominations.

“I am a victim. I was leading in the nomination but unfortunately the order to nullify the process came in. The repeat nomination was designed to ensure that only those in the right books got elected,” he claimed.

Others who lost in the nominations include Kembi Gitura who was eyeing Murang’a senatorship, Kabando wa Kabando who was vying for Mukruweini parliamentary seat, William Kabogo in the Kiambu gubernatorial race and Lappsset Corridor Development Authority Director Karanja Mburu.

In Rift Valley, Ruto’s political rivals have been meeting to scheme how they will benefit from the crisis in the ruling Jubilee government.

Rivals of the DP are in talks with President Kenyatta to sign coalition agreement.

Former Bomet Governor Isaac Ruto’s Chama Cha Mashinani (CCM) is fine tuning details of the coalition agreement before the signing scheduled to take place any time this week, according to the party’s chairperson, Mohammed Guleid.

Jubilee has sealed a coalition agreement with Kanu, a development which has complicated the political matrix in the vote-rich Rift Valley.

Jubilee leaders who spoke to The Standard yesterday said the political landscape in the region was likely to shift with new coalition agreements.

“We are likely to see politicians who fell out with the DP coming together to try and reduce his influence in the region,” said Nakuru Town West MP Samuel Arama, adding that the Sunday meeting between Baringo Senator Gideon Moi and a section of Rift Valley leaders was just a tip of the iceberg.

Since 2013, residents and leaders had maintained that Rift Valley would automatically back Ruto’s 2022 presidential bid, but the latter’s relations with the president and the new coalition agreements seem to be working against the DP.

Ahead of the 2017 General Election, any leader opposed to Ruto faced hostility in Rift Valley. Analysts said the DP erred by fighting Gideon, Ruto, former MPs Henry Kosgei, Sally Kosgey, Zakayo Cheruiyot and other top politicians in the region who would have guided him.

Matters could get complicated for the DP in Rift Valley following developments of the former Bomet governor who has maintained a studious silence since his humiliating defeat by the late Joyce Laboso.

In 2015, the former governor nicknamed Plogom (gumboots) by his constituents because of the time he spends on his farm looking after cattle threatened to disrupt a fund raiser attended by the DP after he was heckled.

He has in the past accused the DP of belittling him in his backyard.

For two years, Isaac hobnobbed with Kanu before finally registering CCM, which later joined the NASA coalition to campaign for Raila’s 2017 presidential bid.

His rebellious nature gave him political mileage but earned him enemies in government, especially when he served as chairman of the Council of Governors.

Having served as MP for six terms, former Tinderet MP Kosgey was ultimately humiliated in his bid for Nandi senatorship in 2013.

He was defeated by then political green horn and current Nandi Governor Stephen Sang.

Kosgey, who was then ODM chairman was beaten by Sang, who sailed through on the defunct United Republican Party (URP).

Dr Kosgei, former Head of Civil Service who had won the Aldai parliamentary seat in 2007, lost to Cornelly Serem in 2013. She contested on ODM while Serem vied on URP ticket.

At the height of the 2017 campaigns, Mr Cheruiyot was criticised for defying Ruto.

Former Nakuru deputy governor Joseph Ruto, the then county chief officer for Education Joseph Tonui and then Nominated Senator Liza Chelule warned Cheruiyot that he would be “taught a lesson” for defying the DP.

The anti-Ruto brigade also accused him of disrespecting President Kenyatta and failing to heed calls to stop the early 2022 presidential campaigns.

“The DP has himself to blame for what is happening to him and his allies in Jubilee. He failed to read the signs on the wall and it is now payback time for him,” said Mr Arama, who is in Kieleweke.

Businessman Bundotich Kiprop alias Buzeki, who fell out with the DP and joined CCM said: “Out there people think all Kalenjins are corrupt yet it’s just a few individuals engaging in graft and protecting cartels, thus damaging the name of the community.”

Buzeki said CCM will team up in the coalition in a bid to whittle down Ruto’s grip on the vote-rich Rift Valley.

This comes at a time when Ruto is fighting to hold on to the Jubilee support in Central Kenya.

Allies of President Kenyatta have openly stated that the DP is not fit for State House.

Sources have revealed that at least three governors, six MPs and five senators in the region along with a Mombasa-based tycoon from North Rift back the CCM- Jubilee coalition talks.

Elgeyo Marakwet Governor Alex Tolgos ditched Jubilee in favour of Kanu and has been working closely with Senator Gideon. Many other leaders have opted to take a neutral stand in what has alarmed Ruto’s inner circle.

Among those who have retreated from Ruto’s activities is the vocal Uasin Gishu Governor Jackson Mandago.

Tiaty MP William Kamket has been heavily critical of the DP.

“Time is up for the deputy president. It’s time for a new political dispensation. Kanu is firmly in government and Gideon Moi is the man to watch,” he said.

But the DP’s allies are determined to fight back and yesterday dismissed the new coalition agreements as a non-starter.

“In Rift Valley Ruto is the kingpin. Come 2022 no one will run for any seat and succeed without Ruto’s blessings,” said Bahati MP Kimani Ngunjiri, an ally of the DP.

He added: “There is no revolt against the DP in Rift Valley. If anything, Ruto is stronger in Rift Valley than at any other time. We only look forward to teaming up with other Kenyans in 2022.”

“The people opposing Ruto in Rift Valley are part of the Kieleweke team out to scuttle the DP’s presidential ambitions. They should know that their goose is cooked and they will lose terribly in 2022,” she said

By Patrick Muinde | 2 days ago

By Dominic Omondi | 9 days ago

By Daniel Wesangula | 25 days ago