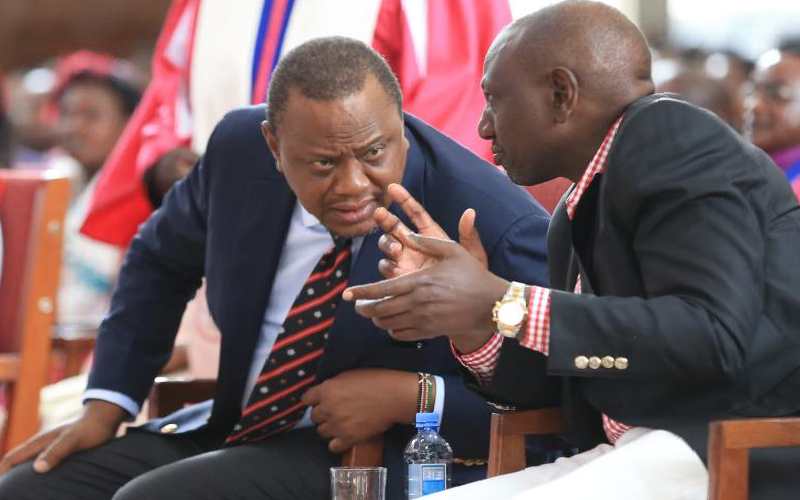 The Jubilee Party has been the first to emerge from the stupor occasioned by the Coronavirus (Covid-19), to get back to political business. Business within the political class in Kenya means scheming, backstabbing and squabbling.

This is the staple on which the political elite feeds the country from one election to the next. In the process, alliances are formed and broken. They make way for yet new formations that will, in turn, be broken again.

The energy that drives all this is the spirit of political self-interest. There are no new frontiers of visionary thought, or new public agendas informing the arrival of new partnerships and death of old ones. It is all about who will be the helmsman in the ship of State and who will get what as a result. Accordingly, the night of long knives in the ruling party kicked off, apace, ahead of the first positive report of the Covid-19 in Kenya.

Wearing the façade of popularisation campaigns for the Building Bridges Initiative (BBI), the knives were aimed squarely at the Deputy President, Dr William Ruto. Even when he desperately tried to associate himself with the contents of the November 26, 2019, BBI Report, his detractors brushed off those efforts and continued to ridicule him, with the promise that nobody could stop them. “Nobody Can Stop Reggae,” was their clarion call.

Then coronavirus struck and everyone suddenly fell silent, as if they were under a spell. As the new Cabinet Secretary for Health, Mutahi Kagwe, and his team have reeled off one status report after the other, the political class has remained conspicuously missing in action.

That was until last week when Jubilee crawled out of the woodwork to resume its unfinished business. In the middle of countrywide anxiety over the cutting off of Nairobi and the coastal counties of Mombasa, Kilifi and Kwale, from the rest of the country because of the feared coronavirus, the attention of the country was suddenly drawn to a copy of a letter by the DP to the Acting Registrar of Political Parties, Ann Nderitu.

Dr Ruto was disowning changes in the National Management Committee (NMC) of Jubilee Party.  It is instructive that he signed off in his capacity as the Deputy Party Leader. He also used the party letterhead, to drive home the message that he was speaking from high up on the rungs of the party.

Critically, he said, the NMC had never met and its membership had never been varied. Accordingly, Gazette Notice No 3084, announcing the new team in the Jubilee NMC, was nugatory in law. And just as quickly, some five members of the party issued a press statement to challenge him, in support of the changes.

However, they went on to state that the Party Leader – effectively President Uhuru Kenyatta – can make any changes in the leadership at any level, without consulting anybody.

Whatever the case, the night of long knives is back in earnest. It has all the promise of a messy fight. Before coronavirus jolted and disrupted them, the protagonists in this drama had thrown all caution to the wind. Both President Kenyatta and his deputy were bringing their internal rifts and frustrations into public space with unrestrained shows of anger. They were both shooting from the hip, with their lieutenants taking the cue from them.

In the wake of the BBI rallies, the Ruto camp, christened Tangatanga, gave their Kieleweke counterparts a big scare when close to 200 MPs assembled in Naivasha, to strategise for their own alternative rallies, ostensibly to (also) popularise the BBI Report.

They were, however, swiftly countermanded and went on to join the mainstream Kieleweke-ODM organised rallies as junior partners. In the process, they have been bullied, ridiculed and promised political havoc. As the rallies began going towards Kalenjin Rift Valley, however, Tangatanga seemed to begin gaining mileage on Kieleweke. Kieleweke and ODM first came to terms with the reality that all was not well at the February rally in Meru.

A big section of the crowd began walking away as soon as Dr Ruto’s man, Senator Kipchumba Murkomen had spoken and left.  Next, intelligence sources revealed that the rally planned for Eldoret, Ruto’s home base, was going to be bad for Kieleweke/ODM. The Eldoret rally was abruptly called off and, instead, one major rally planned for Nakuru. Again the initiative seemed to be slipping through the Kieleweke/ODM fingers. The first positive report of the coronavirus in the country came, therefore, with some measure of unintended relief for Kieleweke-ODM. It was just what they needed to slow down reggae, if nobody could stop it.

It is difficult to tell what has prompted the resumption of the hostile competition in the Jubilee at this time. It could be an indication the leadership is getting used to the virus affair, and they are ready to carry on with other business alongside fighting the virus. Alternatively, it is also possible that they would like to emerge out of the Covid-19 situation with two victories, when the time comes.

One of the victories should be against the virus. The second one should be the vanquishing of the DP perceived as hard to manage. Still, it is difficult to understand the sense of timing. Everywhere in the world today, political games have taken a backseat, as the war against coronavirus is engaged.

In the United States, they expect to go to the presidential poll in November. Yet very little that is overtly political has gone on since the first report of a positive covid-19 report. Away from the Democratic Party primaries, not much else has appeared to be happening in the United States.

The changes in Jubilee, bringing to the NMC persons who are hostile to Dr Ruto, represent a new multi-pronged approach against him. The matter of impeachment may, therefore, be very well still on the cards, too. With the challenge of numbers in Parliament (wrought by the coronavirus menace), however, it will be interesting to see how Dr Ruto’s detractors will go about impeachment. Impeachment requires two-thirds (194 members) of the House. Speaker Justin Muturi has announced that only about 53 MPs will be allowed into the chamber when Parliament resumes. Impeachment, therefore, faces a hard start.

The other prong against the DP is the possibility of intensifying the assault against his foot soldiers. The Majority Leader in the Senate, Murkomen is a clear target. There have been speculations about the possibility of him being removed from his perch in the Senate. Also up for similar treatment could be Mumias East MP, Benjamin Washiali, who is the Majority Whip in the National Assembly. Dr Ruto’s other political assignees and retainers may not be too far off the radar. It is going to be interesting to see what cards are dealt to them in the coming days.

Esther Wahome of Kandara, a Ruto diehard, was under a lot of political heat before coronavirus hit hard. So, too, was her Mathira counterpart, Gachagua Rigathi, Gatundu South MP Moses Kuria, Bahati MP Ngunjiri Kimani and Nakuru Senator Susan Kihika. Others like former Kiambu Governor Ferdinand Waititu have already bitten the political bullet, with a lot more in store for them in court corridors. Yet, there are others who have read the signs of the times and elected to go slow in their support for the DP, or to keep quiet altogether.

But the happenings in the Jubilee are also a test case for Kenya at least at two levels. In the first instance, is the question of what, exactly, is a political party. If Ruto is kicked out of Jubilee, as it might be intended, could he still survive politically? A hostile NMC, as appears to be intended, could be the curtain-raiser to kicking him out of the party. According to the Political Parties Act (2011), a person who loses party membership will also lose any political position to which that person has been either elected or nominated. The effort to change the composition of Jubilee’s NMC could be the start of that process in the case of Ruto. The owners of this process possibly consider it to be an easier route than the impeachment avenue.

If indeed this is the thinking, however, they are likely to find it easier said than done. And this is where the second test comes in. It has so far proven quite a Herculean task to get rid of errant party members in all major political parties in the country, since the coming into existence of the Political Parties Act. The process is painfully long, slow and tedious. First, the party has to convince the Registrar of Political Parties that the errant member has been accorded a fair chance to be heard and that internal dispute and conflict resolution processes have been sufficiently explored and exhausted. This must be done in line with party mechanisms that are clearly spelt out in the Party Constitution.

If satisfied that proper avenues have been followed, the Registrar of Political Parties will strike the name of the errant member (in this case Ruto) from the party register. He then ceases to be Deputy President. But the DP can complain before the Political Parties Dispute Tribunal (PPDT), which must hear and resolve the matter within 90 days. The tribunal can stay his expulsion during the hearing.

If the PPDT upholds the expulsion, Dr Ruto can go through appellate process via the High Court, the Court of Appeal, all the way to the Supreme Court. The courts reserve the right to stay or uphold his expulsion, during the duration of the hearing of the appeal. This process could, however, drag on all the way to 2022. It is, therefore, an option the owners will want to reflect on carefully before engaging the gears. It could, however, have the benefit of slowing down the DP, while also leaving a blot on him. Yet, the converse is also true. It could win him sympathy from the electorate as a leader under persecution.

Ruto’s detractors in Jubilee may also want to consider whether the DP has not already run away with their party. While it is possible he is regretting the day he dissolved his United Republican Party, Ruto may as well have also taken off with Jubilee, given that a party is about the people and not vacuous organs and instruments. When Kieleweke/ODM MPs announced at a press conference that they were going to impeach Ruto, an even bigger number made an impromptu assembly, where they dared them to make good their threat.

It is instructive that the goings on in Jubilee are not unique. All previous political alliances in the country have been about elections. Once the election is over, the protagonists begin looking for new partnerships and formations, ahead of the next election. Ruto is probably aware of this and could be having a political party in the deep freezer somewhere, to be unleashed on Kenyans at the right time.