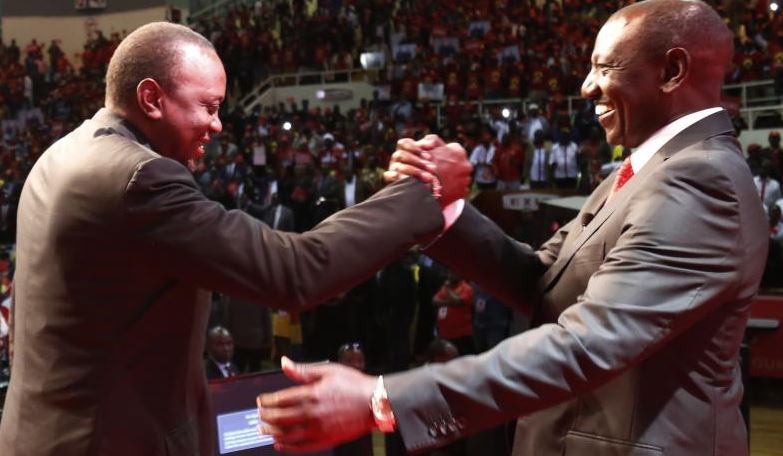 The renewed war between President Uhuru Kenyatta (above) and his Deputy William Ruto (pictured right) over the control of the ruling Jubilee Party has disrupted the lull in the political arena.

The battle to control Jubilee through the National Management Committee (NMC) is threatening to split the party.

And party vice-chairman David Murathe is daring the DP to direct his anger at the President.

A Kenya Gazette notice dated April 6, by the Registrar of Political Parties (RPP) Anne Nderitu giving the intentions of the Jubilee Party to change officials of the NMC prompted Ruto and his brigade to come out guns blazing.

The stakes in Jubilee are high for the DP who has invested immensely in the outfit that he hopes will help him give a stab at the 2022 presidency and therefore any distractions are dealt with head on.

Ruto led the affront in which Gatundu South MP Moses Kuria said 150 legislators had written to Ms Nderitu giving reasons why the notice was ‘inconsequential’ and ‘fraudulent’ and asked the RPP to disregard such intentions.

Ms Nderitu notes that Jubilee Secretary General Raphael Tuju had sought to replace the names of former secretary-general Veronica Maina, Pamela Mutua and Fatuma Shukri who had resigned after securing jobs in government.

The new NMC according to Tuju would include, former Kitutu Masaba MP Walter Nyambati, James Waweru, Lucy Macharia, Jane Nampaso and Prof Marete Marangu. The new team would alongside the national officials be incharge of daily running of the party in membership and parliamentary strength.

Ruto who is the Jubilee Party deputy leader in his letter to Ms Nderitu termed the move as illegal and fraudulent.

“A gazette notice … In light of the foregoing, the intended changes of the NMC membership is, therefore, illegal and fraudulent,” Ruto wrote in a letter dated 10th April.

This opened a floodgate of protest letters by the DP’s allies.

National Assembly Majority Leader Aden Duale said that being the third in command in the party, he sits in the National Executive Committee (NEC) and at no time has any organ discussed changes to the NMC.

“I sit in the NEC and we have not met since the general elections of August 2017. I have never been invited to any meeting to discuss any intended changes in the NMC,” he said.

He added: “The purported replacement and reconstitution of the membership of the NMC has never been sanctioned or approved by any of the party organs as mandated by its constitution.

Duale further said that, “By virtue of my position as the Majority Leader I ask to be availed the notifications received if any, of the intent to the changes under section 20 of Political Parties Act. In your notice together with the accompanying minutes and forwarding letter purportedly from the party within 48 hours of receipt of this letter.”

Tuju told the Sunday Standard that this move was sanctioned by the President who is the party leader.

“This was a simple procedure of the party leader replacing vacant party positions within the NMC, Ms Shukri and Ms Mutua have since joined the government and therefore could not hold the positions in the party,” he said.

Mr Murathe wondered why Ruto and his brigade had come out fighting when it was clear that the names in the list had been given by the party leader.

“Tuju is not a mad man, he was obviously under instruction of the party leader, so if the move was a fraud as they claim, it is the President and party leader they should direct their wrath to,” he said.

The Jubilee vice chairman explained that given that Jubilee has more than nine million members, those aggrieved by the president’s decision should raise more than 50 plus one percent of the signatures of the registered members.

“Once they collect more than 4.5 million signatures, they should be verified by the RPP or Independent Electoral and Boundaries Commission, if they fail then those who did not protest will be deemed to be in support and are the majority and the names will stay,” said Murathe.

But Mr Kuria said they will insist that the law is followed. “We will have over 150 MPs protest the move, we want the constitution of the party followed,” the Gatundu South MP said.

The latest confrontations could signal a deteriorating relationship between Uhuru and Ruto that had in the past been fought through proxies.

Murathe maintained that someone must give way.

“They either leave the party or those in the other side leave one must create space. The Deputy President now has to decide if they want to work or leave the party,” he said.

Political analyst Dismas Mokua noted that the renewed war was a confirmation the factions within Jubilee have deep rooted differences that nothing can bring them together.

He said that if Ruto was not in the loop of such a fundamental move then the party had started wasting away from the top.

“If he was not consulted then the owners of the party are telling him to take a walk out of the party,” said Mokua.

Previous article
Church cartels must be missing their Sunday fix in containment period
Next article
Pregnancy made me hate my husband's voice, cooking