Tales from a bush pilot with love for farming

By Jacqueline Mahugu | 3mos ago 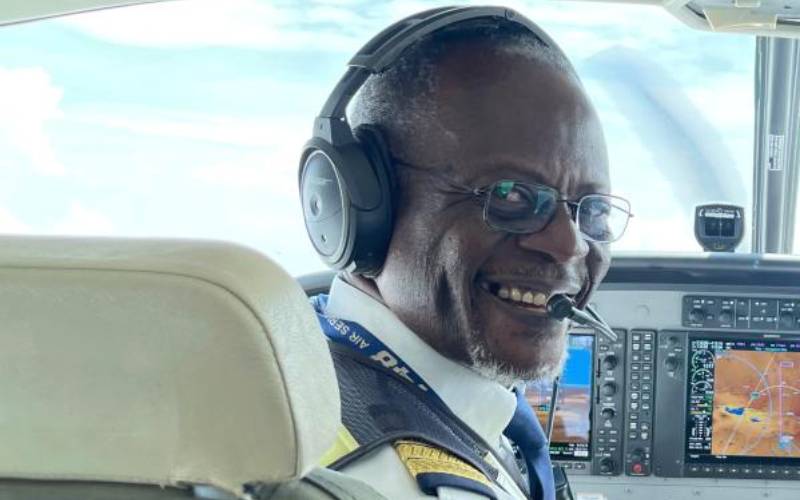 Captain Tim Oruya (pictured) has narrowly escaped bombs, being shot at, and has evaded wild animals in the course of his career. Bush flying is not for the faint of heart.

He has been in Juba for a significant part of his career, doing rescue missions and humanitarian work. On both sides of the war in South Sudan, he had friends, which saved him, several times. They knew him as “the captain who hugs people,” so they hugged him back.

He remembers one of the incidences where he had a close brush with death when they were trying to get to Riek Machar, who was in hiding. He was flying The Intergovernmental Authority on Development (Igad) delegates to meet Machar for peace negotiations.

“Nasir (in South Sudan) was a Nuer area and the government had come in and pushed them out into the river. They were hiding in the swamp. The camp where Riek Machar used to be was then empty because it had been taken over by the government,” he says.

“So at some point, we were flying over the marsh. Two aircraft – one was flying soldiers, while I was carrying the Igad people. The guys ahead of me were to land first because they were soldiers and then I would land so that they would have security. Some people below us started shooting. I could not hear them over the noise but as soon as we landed everyone was asking if they had gotten us,” he says.

Two weeks later, he landed elsewhere and met a friend, Gabriel who told him, “I am sorry we were shooting at you! When you passed over, I said, ‘Oh that’s Tim! Stop, stop!’” He still talks to Gabriel.

Another time, they had to rescue an army general who Bashir was trying to kill, in Kurmuk, South Sudan. It was a secret mission. “SPLA was very close with us at Fly 748 as we were among the first to set up there. When they had problems, they would call us up. So that time, the idea was to land in Kurmuk, three hours away from Juba where we were, early morning to get this general and his people out before they get caught. He had actually been attacked by Bashir’s army and had somehow escaped into the bush,” he says.

“Just near Malakal, I had to drop down low to avoid radar. I was flying about 50 feet above the ground, in between hills, but when I landed, there is no one on the runway. As I am waiting, I see someone coming from behind the bushes,” he says .

“It was someone I knew so I opened the door, they jumped in with his bodyguards and everything, we locked up and took off. Only to find out that a few minutes after takeoff they had dropped a bomb there, targeting the plane. They had somehow seen approaching on the radar. A few days later I went back and found holes in the runway.”

The book Captain Tim is writing will be out this year. It is rife with such stories, and the more I listen to them, the more I cannot wait for the book. This life, as scary as it is, has been exciting and he loves it, but it almost did not happen.

He studied Mechanical Engineering because everybody said that was the thing to do back then, even if his heart leaned heavily towards the arts, but his very strict father would hear none of it.

While he was very methodical with his children  - they grew up with no TV and he pre-planned conversations with them to ensure they were useful – he had a very different approach. Letting them explore their talents. On one wall are two paintings his son painted. Medals and trophies earned by both his children from swimming championships are displayed on a cabinet.

He is 65 now, and back when he was starting, he had gotten a private pilot license in the US while working there as a mechanical engineer.

He dreamed of flying commercially when he moved back to Kenya, but becoming a pilot as a black Kenyan was unheard of. It was extremely expensive, about Sh5 million then. Nowadays it takes about Sh10 million to train and get a license.

Worse still, he says, all the flying schools and opportunities were closed off to the blacks. It was not until Musa Bulhan, started Navigators, that blacks had an opportunity to learn flying.

So he did everything else. He worked as an engineer, and became a business manager for a flower company, a different career, and then his ageing and ailing father asked him to take over the running of the family farm, a dairy farm. They also grew sugarcane. “I did that for a while and realised I needed some training in dairy farm management. I started working with American Breeders Service, which helped me improve our breeds through AI. I took a course with them in Kabete just to know how to do my own AI to improve my herd. That was in 1995,1996,” he says.

“The returns from the farm were very little. I was looking at my children growing up and I wanted them to have a good education and it looked like it was not going to be possible, so that concerned me.”

That is when the thought of flying came back. He had the Private Pilot Licence from back in the day, but he needed a Commercial Private Licence (CPL) to fly commercial.

How I went back, ABS would take farmers for training in the US,” he says.

“They worked with farmers all over America. They would bring people in to learn how to produce anything to do with cattle, up to when you produce milk, how you take care of milk, make yoghurt, cheese, and stuff like that. So in 2000, I was paired with a farm out in Arizona that had around 2,000 head of cattle.

“We were raising those animals in the desert. It challenged my mind. I said, ‘Wow. In Kenya, we have so much grass and these guys are doing this in a desert’. Arizona is predominantly a desert state and we were raising cattle that were producing on average 50 litres a day!”

They were being paid to work so he ended up getting the CPL, and came back to put what he had learned to use while looking for a job as a pilot. It took him three years to get it.

“I got a job and started flying commercially in 2005 when I was already in my 40s. Most people start flying in their 20s. Everybody was wondering if I was going to make it. I had to go back to school and all my classmates were 20-something year-olds, half my age,” he says.

He did various bush-flying jobs before landing his longest-serving role as Captain at Fly 748. The Cessna Caravan was the plane he flew most but he has also flown the Beechcraft and others.

He has flown people like George Clooney, Orlando Jones, John Prendergast, and the Queen of Jordan.

I ask him what flying is like for him.

“It is not the flying, it is the experience. I get involved in people’s lives. Like now, I fly a lot with young people who I mentor,” he says.

He has always preferred bush flying to regular flying. “We had no GPS. We had a watch, a paper map, a ruler and such. You look at the map and you know, after 10 minutes I should be flying over a river. Where is it? Then you see it and realise you have been pushed by the wind, so you use a whizz wheel where you can work out the strength of the wind. Then you crab the plane into the wind to bring you back to the path you need to be on to make up for the strength of the wind. You look at the topography and make calculations on how to land on sketchy runways. These days the plane does it for you,” he says.

I ask him which plane he loved most, and it is the Caravan. “I do not know if anybody is going to beat that plane. It is a very reliable aircraft if it is taken care of. It is an iconic aircraft. It is a workhorse,” he says.

Speaking of workhorses, that is what he is doing now that he is retired: working with his horses.