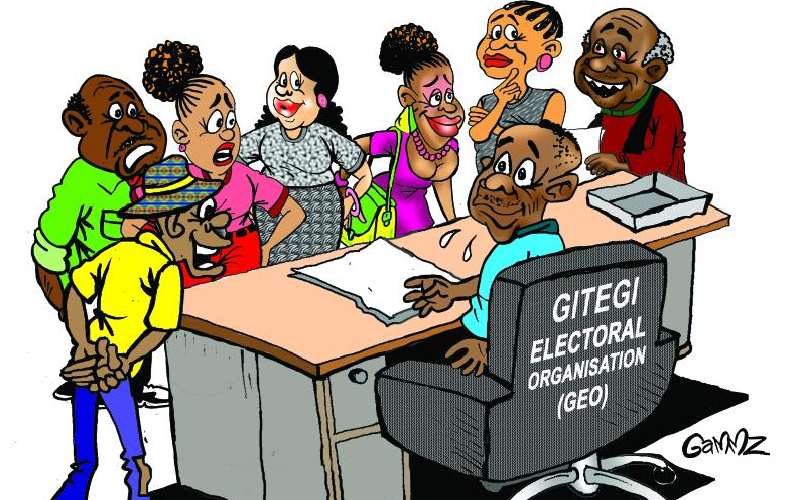 If you pass by Harold’s Assemblies of Holy Associates (HAHA) church and see a skinny young man behind a school desk hunched over papers, grunting in agony as he unsuccessfully tries to spot a name therein, then rejoice for you have seen the prince of Gitegi: Yours truly.

I have been here three days now as we ramp up our campaign to have people register ahead of the 2022 vote. The registration drive has been met with resistance from Sue, who has started a parallel registration camp at her pub.

The problem is that the person overseeing the registration in the two places is the same: this genius you will be seeing outside HAHA.

In the past, our electoral body was labelled incompetent, and we had a hard time trying to counter those allegations.

Sue and I ran Harold’s campaigns and also oversaw operations of the now defunct Gitegi Electotal Organisation (GEO). Harold always won with a landslide, which was abhorred by competitors, and if you stop to think about it, they were right; no person should be comfortable with landslides or any other natural disaster.

But now, with Sue out of the picture, we are almost one per cent less corrupt.

With Sue promoting apathy among potential voters, I have found an ingenious way to make people register at HAHA.

Harold on Sunday preached about Ananias and Sapphira, that notorious couple in the Bible who lied to the Holy Spirit and died instantly. And so, Harold said to a shocked congregation of believers, it was a week of revealing everything if they were required to.

It was a timely message for when they came and found me at the registration desk, they told me all I wanted to know.

“Your name, you said, is Martha Wacuka?”

“And how many chickens do you have?” I asked as I scribbled down the name, never mind the old register, also in my hands, still had the same name.

“Why does that matter? Do…”

“Do not be Sapphira. Answer the question.”

“Okay. Six chickens, three goats, a heifer, and there is a porcupine that oft sneaks into my farm.”

“Good. Are you in control of these animals in such a way that they would do whatever you asked of them?”

In politics, you have to be wise. When they are counting Ls, you should be counting Ws.  In street lingo, to make it simple, Man U has been counting Ls.

In the end, Harold had about 190 per cent of the village supporting him. There were double registrations alright but like in scrabble, whoever shouts loudest makes the rules. Here, power is vested in Harold, who, despite his dislike for vests (Harold does not like white clothes because they turn brown really quick) makes the rules.

When I went to Sue’s to give her a share of my rare services, the drunkards staggered to my table and said,

They meant Susan, who we often call Sue. But because I am impartial, for every Shoeshine uttered, I indicated them as an undecided voter. Undecided voters will vote for Harold.

Here, double registrations were not accepted. If a woman had registered her husband in Harold’s register, and the husband happened to be at Sue’s, such a man was barred from registering at Sue’s.

The importance of registering them according to the candidates they support is to aid in release of an opinion poll that can cement the belief that the people in my village are determined to reward mediocrity. his is an opinion yours truly has held for the longest time.

Now, 260 per cent of the village is already registered but you can still find me outside HAHA church, hunched over papers, and in the evenings at Sue’s, listening as drunk introverts explain exactly how ants mate, and come get your name rewritten.

Sixteen wildlife photographers were last week awarded by the African Wildlife Foundation during its 60th-anniversary celebrations .

Coming out of your quiet shell

Sometimes introverts are confused as antisocial but far from it, they wish to be part of social gatherings, they just don’t know how to.

By Mukurima Muriuki | 3 days ago