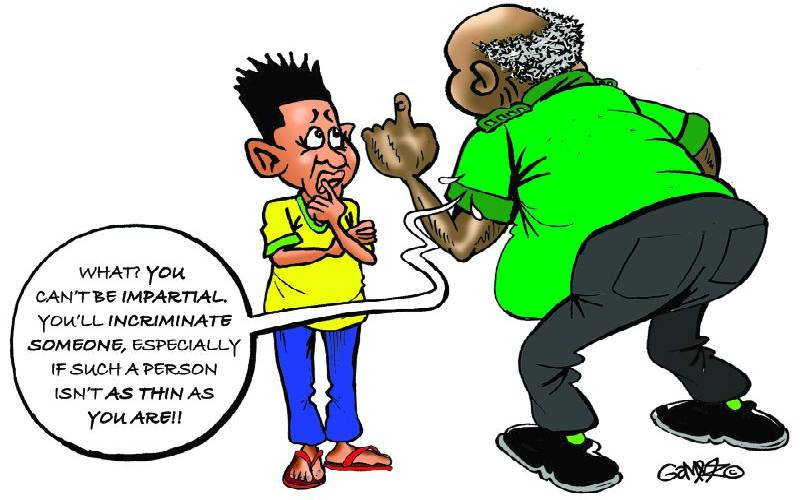 Harold does everything in the most condescending manner anyone could, almost as if he were the giver, and controller, of life.

That everyone comes to him for help has turned him into a monster. He barks orders and reminds all and sundry that failure to adhere to his rules will result to more than just an exclusion from Gitegi Gossip Club and Harold Assemblies of Holy Associates (Haha).

Last week I received an important invitation from Githendu, the man who claims to have been the little boy who carried the five loaves and two fish Christ used to feed 5,000 people.

Fearing a by-election, Harold wanted to hide in a ‘banker’

I honoured the invitation and over a cup of cold gruel (Githendu is not known for welcoming guests warmly) the devastated man briefed me on his purpose for the meeting.

“This past night, I saw the devil himself. He stole all my chickens,” he grunted, slurping his porridge.

I had noticed that something was unusually lacking when I entered the compound. Now it had clicked; the usually raucous chickens in Githendu’s were missing.

They knock over cups, dip legs inside gruel and climb on visitors’ laps. Uncle Harold once called that a “fowl behavior.”

Githendu explained how his three chickens were stolen at night, and that the rooster had however cackled loud enough to attract his attention as it was carted away.

“I just about saw a silhouette duck into the shadows,” he said. “I was too drunk to give chase.”

I remembered that Uncle Harold had been missing from the house more than half the night, and that he had come home early morning carrying fried chicken.

What Githendu wanted was for me to negotiate with Uncle Harold so the pastor could pray for him and for the thief, then gather villagers for a harambee to help him rebuild his poultry farm of three chickens.

When I talked to Uncle Harold, he quickly agreed and promised to arrange a harambee.

Sunday afternoon, after Harold had wrung the faithful’s pockets dry, he reminded us all that we were supposed to be gathering in the church compound later that afternoon. We would be joined by some non-believers, which is what he calls the very men and women he parties with on Saturday night so much so that they are unable to be in church the next morning.

The villagers came in their numbers and settled. As usual, Sue was the usher; she always is if there is money to be collected.

Uncle Harold preached, and, as usual, passed round the offertory bag. “To who much is given, much is asked for!” screamed Harold when the basket got to Githendu. Harold demanded to know how much the “celebrant” contributed.

“Githendu, who expects all of you to contribute to him, has only given to the Lord 30 shillings!” announced Harold. With that Githendu’s face flushed red.

People gave their contributions, one after the other, with an eagerness that baffled all of us. Someone even gave an egg he had brought for Githendu to Harold. The egg, the contributor said, would have translated into a rooster for Githendu.

At the end of the day, Githendu had gathered three eggs, two chicks and Sh198. After he had paid Harold his due, Githendu took home an egg, a chick and Sh30, and thanked Harold the following morning via a painful letter.

In the letter, Githendu sought one more favour from Harold. An investigation that would unmask the chicken thief.

Harold asked me what I knew that could help in the investigation and I confirmed I had been briefed on the size of the offender.

I was also going to do an independent search. Harold objected. He argued that I was never going to be impartial, and would find a way to incriminate someone who was not at all on the wrong, especially if such a person was not as thin as I was.

“Like say myself just because I brought chicken home the other day. You are so ungrateful I should stop feeding you,” he complained.

I started doing my private investigations into the kidnapping and probable eventual murder of three chickens. I roped in Sue, who confessed that the night the chickens disappeared, a man appeared in the bar with, coincidentally, three chickens, but donated one, the smallest, to her.

“We slaughtered one and hid the other,” said Sue, requesting that she remains anonymous.

“From a crowd of a million. I am certain Githendu knows him and is just afraid that the life of his other animals will be in danger if he exposes the criminal.”

Sue showed me the chicken that had been spared and stuffed inside a box meant to be its new coop.

I took the chicken to Githendu and he identified it with ease, quite the same way he would identify the man he says was responsible for stealing his chickens.

“Can you give me clues that can help me trace this man?” I asked Sue, scribbling down on my notebook.

“He feeds off the gullibility of the masses.”

“He preaches wine and drinks wine.”

When I later asked Harold if he would join Sue and me in unraveling this mystery, he declined. Apparently, he had chickened out.