By Joseph Maina | 6yrs ago 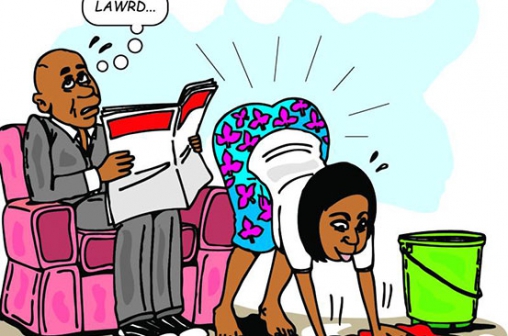 As a family man, it has never been my wish to ogle women,  but there are times, however, when my eyes involuntarily go “window shopping”, if you know what I mean.

You see, whenever a beautiful woman walks by, even if I am with my wife, or even if I am driving at a high speed, on a bad road and in bad weather, my vision picks up the woman.

I may fight the urge to look, and I have even tried praying about this problem, but I just cannot help it. Things get worse if the woman in question is dressed “suggestively”.

With apologies to my pastor, my former Sunday School teacher and my mother-in-law, I am afraid to say that my eyes do not have curtains on them.

And like most married women, my wife has a very low opinion of men who stare lecherously at women.

“Men who ogle are ogres,” she says, wondering why a married man would throw an unlicensed stare at another man’s wife or girlfriend.

To her credit, Mama Jimmy is still the stunningly beautiful woman I married some decades back, but this is where she gets it wrong.

“My dear, this is just how we are wired,” I tell her. “We are programmed to pay visual compliments to nature’s finer things, and you cannot undo what nature has done.”

Last Sunday, our house girl woke up at first cock crow and set off to work. She was dressed in an old T-shirt, a pair of slippers and a shuka loosely tied around her waist.

It may have been a haggard look, true, but this look sent kilowatts of electricity down my spine. She then embarked on cleaning the floor. I was finished! My whole system was on fire, and I could feel the deafening gush of my hormones cruising like miraa trucks.

“Stop ogling,” Mama Jimmy, who had tiptoed into the room, whispered in my ear.

“Er.... I’m not ogling,” I stammered amid a mild, pretentious cough. Later on as I drove my family to church, I saw women of all shapes and sizes, clad in colourful attire.

I wish I could say that I paid no attention to them, but that would be a shameless lie. Looking at other women is like radar that just will not turn off.

At some point, my eyes wandered off the road and I almost crashed onto an oncoming long-distance truck. Mama Jimmy was furious.

“Baba Jim, wacha kuendesha gari kama wheelbarrow,” she scolded, fearing that I would turn her into a crash-test dummy.

Later, as we sat in the House of the Lord, I caught myself savouring this delightful mama who strutted into the house just before the sermon.

Not only was she endowed with drop-dead good looks, but her legs, seen through the generous slit on her skirt, left me gaping like a zombie!

For a fleeting moment, I wished she were my second wife! “Wacha kuzubaa, Baba Jim!” Mama Jimmy posed, interrupting my visual feast.

I reluctantly disengaged my stare but to tell you the truth, it took many minutes for the thought to die. Her hourglass figure completely arrested my attention, and I would be lying if I told you that I heard what the pastor was yammering about!

Later on, another woman sauntered by, accompanied by my admiring stare. This time round, Mama Jimmy decided to grab the fool by the horns. “Do you think she is pretty?” she posed. I paused for a second and decided to play it straight, so I admitted that the woman was pretty and yes, I had been staring at her all along!

“So it is true you were staring at her?” the comptroller pressed.

“Not really, dear. I was just wondering if I should get you a dress like that,” I lied, before quickly turning to face the pastor.

humour drunk what men want in relationships
Share this article

Without Neymar, Brazil edges Switzerland 1-0 at World Cup
Football
By Associated Press
58 mins ago
MPs performance so far has been anything but impressive
Opinion
By Githieya Kimari
1 hr ago
Give adolescents contraceptives to address cases of teen pregnancies
Opinion
By Esther Kimani
1 hr ago
Govt sets up PayBill Number to allow Kenyans donate for drought victims
National
By Stephanie Wangari
2 hrs ago
.

By Associated Press 58 mins ago
Without Neymar, Brazil edges Switzerland 1-0 at World Cup