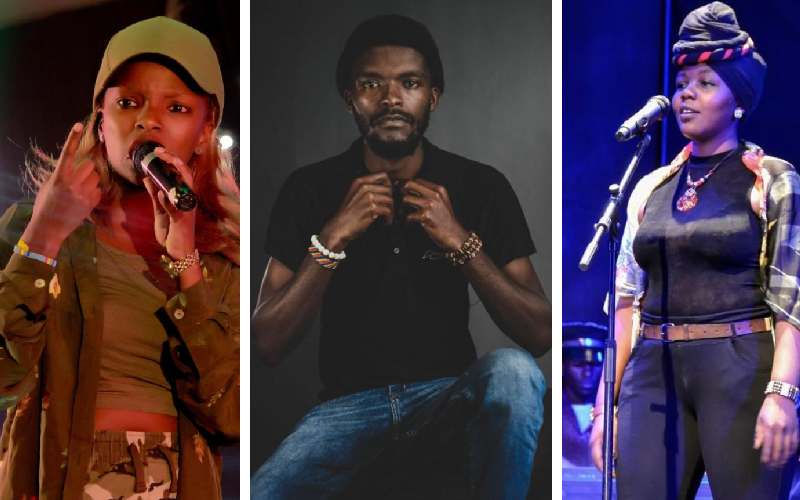 Creative Spills, yet another creative movement associated with Mufasa, played a key role in converging poets and poetry lovers for workshops and performances.

Then at some point, everything went quiet. Now, a newer generation of spoken word artistes and poets are coming up.

Storyteller’s view of Olympics race full of joys and struggles

Storyteller’s view of Olympics race full of joys and struggles

Spoken-word, a poetry genre that has its roots in oral tradition and performance and whose elements can include rap, storytelling, theatre and folk music, existed long before the printing press.

In Kenya, the genre gained momentum as creatives applied it in addressing ordinary discourse that would otherwise be hard to address through other speech communication. It is now that the second generation of Kenya’s spoken word ‘celebs’ is being born.

Take Agama Andes for instance. I came across him at the Sasini Talanta Mtaani Show.

On this day, in a well-packed Diamond Plaza 2 Anga cinema auditorium, the lights beam on him as he poses motionless.

Then the judges give him the cue.

The auditorium remains dead silent as he tears through his piece passionately. Politics. Corruption. Social ills.

By the time he drops the mic, the audience is on their feet.

On the night, three spoken word poets performed. They are part of a new generation of poets. The other two were Siza the Poet and Timo GK.

Checkmate Mido, a dancing poet and trainer of the performance arts says spoken word poets are still struggling to claim their rightful space in the creative industry.

“There are only a few circles where one can practice this kind of art; Kwani?, Slam Africa and Positively Africa so to say. One also hardly gets to platforms that can pay well and spoken word poets hardly have enough to survive off,” he says.

Checkmate Mido who recently led a poetry workshop for Slam Africa during the Grand Slam Finals. He has in the past co-facilitated a poetry performance workshop with Bassey Ikpi; Def Jam Poetry Star) and opened for global poet artiste Akua Naru during her African tour in 2016.

Wangui Kimani aka Kimoney, one of the few female spoken word champions in the country, says most spoken word poets face inconsistency unlike musicians who are more visible.

She urges spoken word artistes to take advantage of the limitless voice and space they have to influence societal issues adding that an artiste should not be afraid of being misunderstood for making their stand known.

“I have personally participated in a number of poets’ forums such as Masterclass with Teardrops, Poetry after Lunch at the Kenya National Theatre and the Kenya Women Slam,” says Kimani.

Woman Slam competition was initiated to create more opportunities for women in the spoken word field to exercise their art.

Qui Qarre, a spoken word wizard who represented Kenya at the Women’s of the World Poetry, emerged among the best 30 women poets for 2017. The competition was held in Dallas, US.

“I must give it up to all those courageous spoken word female poets who came before us and opened the door. Since, many young female poets have been joining the art and if the latest trend is anything to go by, especially at MineFields, I can confidently say that this move is unstoppable,” says the Talanta Mtaani show finalist who describes herself as an Afro-fusion poet known to mix poetry and fashion.

MineFields, a poetry group led by Ms Nina, has been key in redefining the Kenyan identity on the art scene through its mentorship programmes.

And just like Kimani, Gicheru Wanjiku is a passionate spoken word poet with a zeal for life and a deep love for humanity.

Having emerged second during the 64th Grand Slam, Wanjiku has found a space within the poetry scene, with her poetry revolving around sexuality, femininity, political history and boldness. As a multifaceted artist who models, acts, does costume design for films and emcees at Kwani Open Mic, Wanjiku aims to question societal norms.

“I believe art is a reflection of our lives and should embody the spirit world in terms of emulating what we should become. Given that, I believe spoken word artists have experienced some of the issues that are reflected in our society and they should speak about these issues without fear of contradiction,” she says.

“I wouldn’t say that the art is misunderstood or understood. Rather, I feel that the work hasn’t really reached the masses. This is mainly because art is not respected in our schools. However, we cannot ignore the fact that there’s a new generation that actually appreciates this form of art and that means we are moving into a space where spoken word is becoming a big deal,” she says.

He is a poet and satirist as well as a blogger. He is the Slam Africa 2020 champion; the winner of the Garang Nyacharo Memorial Award.

He has also been featured in Just World Poetry Zine by the Irish Refugee Council in conjunction with MTU Crawford College of art.

“My poetry is playful, engaging, stimulating, introspective and out of this world. To me poets are mirrors of the society. Poets should strive to understand themselves before they embark on influencing the world. Besides, spoken word artistes should start to appreciate their craft and the power they carry in their craft,” he says Timo GK.

While hip hop artistes such as Jualiani, King Kaka, Octopizzo and Khaligraph have sometimes used spoken word locally, it will be remembered that some of the celebrated international rappers such as Tupac Shakur wrote poetry and performed spoken word, which elevated them to hip-hop legend status.

There are a lot of budget hotels and self-catering options on this stretch. Just not on the beach itself, but you will be within walking distance.