Back in the studios, songstress-cum-actress Debbie Asila seems to have overcome heartbreaking marriage to chart her own path. She spoke to STEVENS MUENDO

Long before Tattuu was formed, there was Rada, a 1999 theatre group featuring Angela Ndambuki aka Rabbo, Liana Ochola aka Achi, Annette Getecha and Debbie Asila.

Rada was an acronym from the members’ names, which sprouted from Phoenix Players, the participatory theatre where Debbie and the other members of Tattuu —then also christened Smirnoff Ice Girls — honed their showbiz skills.

After graduating from Buru Buru Secondary School in 1999, a young and shy Debbie walked into Phoenix Players auditorium for the auditions of Jack and the Beanstalk, a musical play. And the rest is history.

Soon Rada, the footloose feisty girls, took Nairobi showbiz by storm. They were wild and admirable. They were joined by Angela Mwandanda aka Shinde and Rhoda Nkatha. Whatever the Spice Girls, the British pop girl group that ruled the world with chartbusting music, did in 1996, Rada  did in urban Kenya in 1999.

Students get free online training on acting and singing

Debbie and her fellow Rada members — who also became known as Ogopalets before changing their name to Tattuu — danced for Nameless in his music videos Mannerless, Megarider and Majitu. That was before they participated in a Star Search dancing competition held at the Carnivore Restaurant (in 2002).

In 2003, the charming Debbie landed a presenter’s job and begun to host Warehouse, an interactive music show. She moved on to present Karaoke at the Pizza Garden restaurant. She was on her final year in Daystar University then, and yes, there was no stopping Debbie from living her quest of becoming one of the top showbiz princesses in the region.

It was at the height of Tattuu’s success that Debbie met Shaffie Weru, an ambitious young chap who had  just graduated from college. He had studied mass communication. The two hit it off and became an item.

By 2005, Debbie was expecting Shaffie’s baby, the beautiful Milan.

Even though the couple parted ways last year after a fall out, which saw them trade accusations on social media, the Debbie-Shaffie affair was not short of controversy. In fact, it was never a surprise when the two announced that they had gone separate ways, much as it won’t be a shock if the two got back together.They are like tempestuous soulmates!

They had only dated for two years when rumours of their split hit showbiz headlines. That was in October 2004. However, they both trashed the rumours and announced that they were preparing to wed.

“Shaffie and I are cool, we are in love and ready to get married. If you do not believe me, ask him,” Debbie is quoted to have said back then.

The romantic relationship was at its best that year and could onlyhave gotten better as Debbie landed a job at Kiss FM, the same station where Shaffie worked. Their wedding plans were on high gear even though their split rumours got even worse.

The entry of Joan, Shaffie’s newcomer girlfriend, is said to have hurt Debbie to the point of tears and so much so after Shaffie announced he was set to marry Joan.

All Debbie wanted was to keep the split on the lowdown and avoid public humiliation.

In January this year, reports emerged that Debbie was dating another man and a photo started doing rounds on the Internet.

Her departure from Classic FM and consequent move to cameo on Papa Shirandula elicited mixed reactions.

“What do you mean? I am simply doing something that puts food on my table. I have bills to pay,” Debbie remarked, chuckling with laughter.

“What do you think I use to fuel my Mercedes Benz,” she quipped.

“Shaffie was the love of my life. If you guys have another man to offer me, then go ahead and do it. I am tired of living alone,” she joked as she insisted that the talk of a current boyfriend is just rumours.

“Milan is well in school. I have been working with Musyoka and another producer to roll out my new music,” she explained.

Debbie has tried to keep her private life off the gossip pages. Hers has been a wait-and-see approach.

Word is that Shaffie and Joan are on the verge of calling it quits, after three years together. Shaffie and Debbie are believed to be warming up to each other. Only time will tell.

Those who know her from her Kencell, Toss, Cadbury, Fair and Lovely, Ketepa, Pilsner and Trust commercial adverts will attest to the fact that Debbie is a versatile artiste capable of springing a new twist and breathing new life to what is now seen as a dead showbiz career.

She could be down with Papa Shirandula with the same wit she acted Family Ties, Bold Girls and All Girls Together. Having seen and done it, all, it is believed that Debbie’s bounce back, just as that of the Tattuu group, is just a matter of time.

THE OTHER KENYA 1st August 2015 Life in the streets 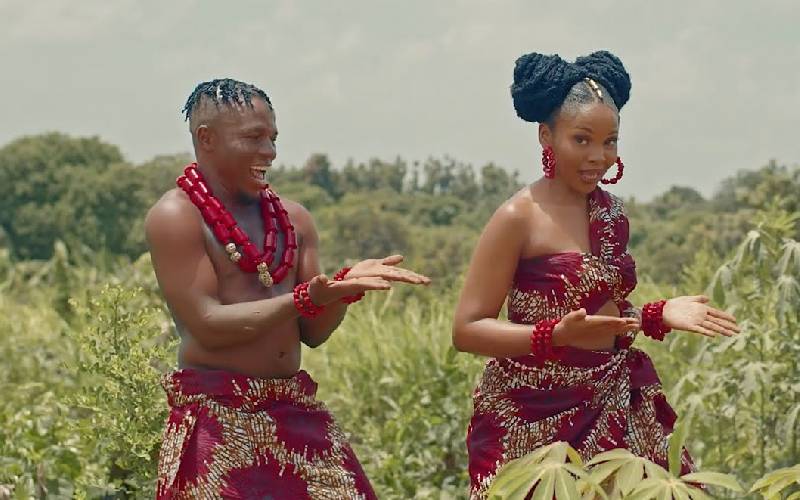 By Meresia Aloo | 6 days ago