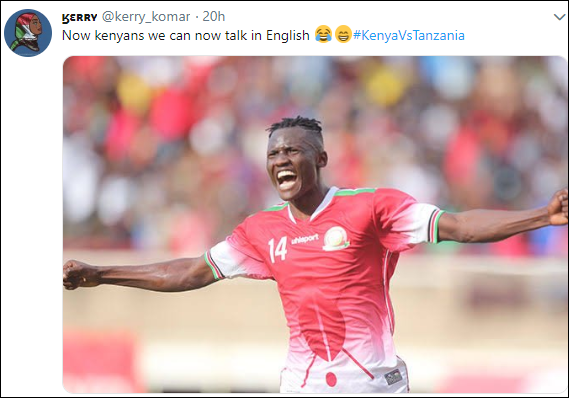 Jubilant Kenyans took to social media to troll Tanzanians following Harambee Stars stirring 3-2 victory over their neighbours in a Group C clash at the Egypt 2019 Africa Cup of Nations on Thursday night.

First half despair turned into ecstatic joy at full time after a brace from Michael Olunga sandwiched a Johanna Omollo equaliser that saw Kenya turn a 1-2 deficit at the break into a 3-2 victory that boosted their hopes of progressing to the knockout stages of the competition for the first time.

The exchanges on popular micro-blogging sites Twitter and Facebook involving netizens of both countries was as thrilling as the action from Cairo.

At the end, Tanzanians came for a good old rubbing from Kenyans.

“I spoke to the Captain (Mbwana) Samatta this morning (Tuesday) and I told them to show our President that we are together with him and even though we lost to Senegal, we will rise with our brothers Kenya. Lazima watakiona (they must face the music),” Makonda pledged to his Head of State.

Following the game, hilarious posts flooded social media and WhatsApp as Kenyans brought out their trolling ‘A-game’ out in full force.

“There is no way (President) Uhuru angeshindwa na Pombe (defeated by alcohol),” one of the memes that gained wide traction stated in parodying the presidents of the two East African nations.

Another meme that gained traction showed the imagined reaction of Presidents Uhuru and Magufuli as the match progressed.

“Harambee Stars inaonekana tutategemea (seems like we depend on) penalties ndiyo tusurvive #AFCON, lakini usipate penalty yetu. File your returns by 30th June #Tujijenge,” the taxman, Kenya Revenue Authority got into the act, reminding Kenyans to file their returns by end of the month deadline.

“Tanzanians, you need to save your English first,” Xtian Ndela mocked with another Twitter user, Bornfes Kangol posting a photo of Uhuru that went viral chiding Magufuli, “You thought you could beat me.”