Kamusinga put up a fight to defeat newbies and Nyanza region champions Onjiko Boys 90-84 in the final Group A basketball match to storm into the semifinals.

On Friday, Onjiko registered mixed results after winning one and losing one match and needed to defeat Kamusinga to stand a chance of scrapping through to the last four.

However, it was Kamusinga who swept aside all their opponents in the group beating Dagoretti 54-51, Wajir 108-18 before edging out Onjiko.

Kamusinga, who went to top the group with six points, will now face Dr Aggrey in today's semis. The Coast region champions defeated Pioneer School from Central 81-34 and Eastern’s Lukenya Academy 67-30 to finish second in Group B.

The other semifinal will feature Laiser Hill and Dagoretti. Laiser Hill topped Group B after winning all their matches against Dr Aggrey, Lukenya and Pioneer.

In girls’ basketball, Tigoi Girls from Western will clash with Nairobi’s Olympic in the semis as Coast's Kaya Tiwi take on Ototo Mixed from Nyanza.

In hockey, Kamusinga are also through to semifinals of the boy’s category after seeing off rivals Kisumu Day 2-0.

In what was a group of death, Kamusinga and St Anthony’s Boys Kitale progressed to the last four from Group A as Kisumu Day and Mangu are sent home.

In girls' hockey, Nyamira Girls will battle with Rift Valley’s Taachasis in the semis as Trans Nzoia Mixed play Misikhu.

The Nyanza Region hockey champions capped off their perfect start on Friday by thrashing Karima 6-1 in their last group match to finish top of the group with nine points.

Nyamira got the perfect start led by their captain Vivian Akinyi who scored a brace as Nyamira Girls narrowly saw off Trans Nzoia 2-1 in their first match before the Siaya County giants demolished Matuiga from Coast 5-1.

In rugby sevens, Nyanza region runners up Nduru Boys made it through to the quarterfinals after defeating Mazeras 54-0 and edging out St Mary’s Yala 22-12 in the Group D.

Butula, who topped the group, will join Nduru. Butala saw off Yala 34-7, Nduru 19-12 and Mazera 35-5. In Group A, Ofafa Jericho and Upper Hill stormed the quarters. 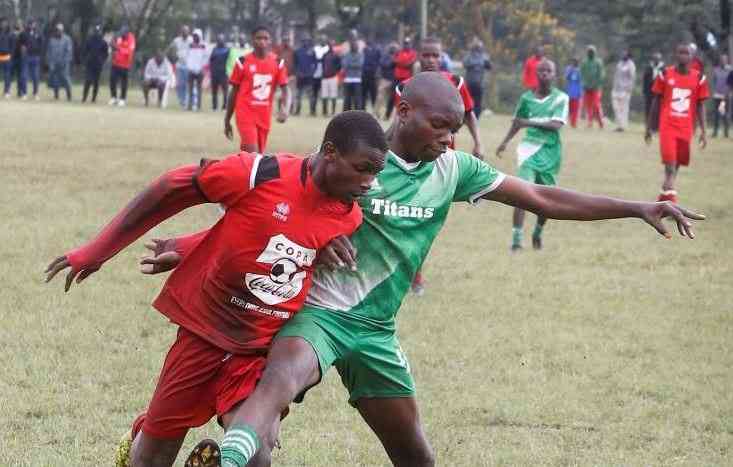