Sweden international footballer John Guidetti on Monday returned to Nairobi and recreated a famous childhood photo with his former teammates from Impala BrommaBoys Academy after 20 years.

Guidetti, who spent several years in Kenya, where his father was a teacher has been in the country visiting some of the nation's tourist attractions including the Maasai Mara during the World Cup break.

On meeting up with his old local buddies, the 30 year-old  took to his official Facebook page and wrote: “20th anniversary with the people who played a big part in forming me into the person I am today. Thankful what they have given me and so thankful to se them again 20 years later. The future is bright. Nakupenda kakas.” 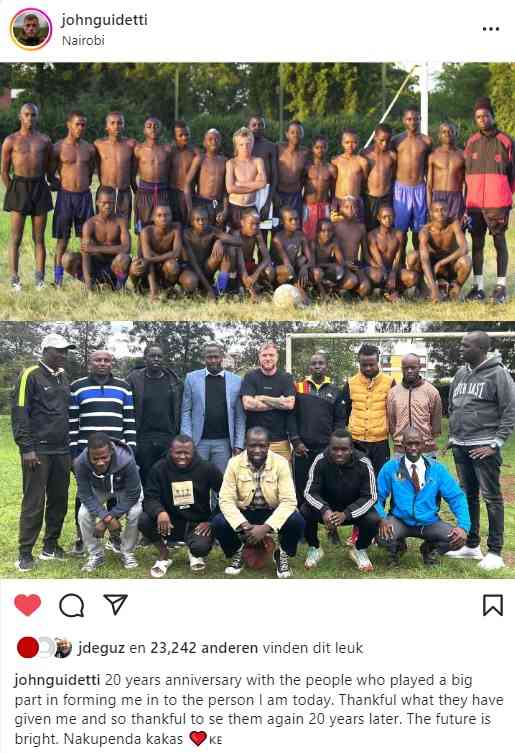 His football career began at the Swedish club IF Brommapojkarna's youth system in 1998, and later he joined the ranks of the Impala Bromma Boys of Nairobi.

“I went to Kenya when I was 3 years old, due to my father's job who was a school teacher. There was no food, no clothing, but every day we were laughing and enjoying our time. They are very grateful for the little things they have. I love these people," said the former Alaves and Feyenoord striker in 2019.

In 2002, Guidetti moved with his family to Kenya, as his father had a job in the country.

This meant that Guidetti had to leave IF Brommapojkarna to join the Impala BrommaBoys football academy based in Nairobi.

After one year with the Impala club, Guidetti joined Mathare United's academy, the MYSA organization for sports development aid, in the slums of Nairobi.

In 2004, Guidetti left the organization and joined Ligi Ndogo. In 2006, he returned to Sweden with IF Brommapojkarna.

In total Guidetti spent around five years living in Kenya which he states helped him to develop on and off the pitch.

“That period was very important for my development, both on and off the pitch. I played football barefoot in the slum areas of Nairobi and I met local people and their culture. I still have a strong link with Kenya and every time I go back there I always get a warm welcome,” Guidetti earlier said on his time living in Kenya.

In April 2008, at the age of sixteen, Guidetti signed a three-year deal with Manchester City.
Four years later, he made his international debut for Sweden.

Share this article on social media
Previous article
I'll be watching the game from hospital: Image of Pele shines bright for Brazilian fans at World Cup