Switzerland advanced to the last 16 of the World Cup for the third tournament in a row after a 3-2 win over Serbia on Friday.

Remo Freuler scored the winning goal just after halftime as the Swiss secured second place in Group G. They will next face Portugal on Tuesday at Lusail Stadium.

Freuler finished off a backheel pass from Ruben Vargas after Xherdan Shaqiri clipped a ball into the penalty box.

Shaqiri put Switzerland ahead early in the first half before Aleksandar Mitrovic and Dusan Vlahovic responded for Serbia. Breel Embolo evened the score just before halftime.

Switzerland needed a win to guarantee itself a place in the knockout round after beating Cameroon and losing to Brazil in its opening two games. The team reached the round of 16 at the 2014 World Cup in Brazil and again four years later in Russia. They lost 1-0 in both matches, to Argentina and Sweden, respectively.
Against Portugal, the Swiss will be looking to reach the quarterfinals for the first time since hosting the competition in 1954.

Switzerland and Serbia meet in the group stage for the second straight World Cup. The Swiss also won in 2018 after a last-minute goal from Shaqiri.

This time, the Chicago Fire forward put his team ahead in the 20th minute to become the first Swiss player to score at three World Cups.
Born in Kosovo, which declared independence from Serbia in 2008, Shaqiri ran straight to the opposing fans to celebrate, putting his finger to his lips after being taunted by that section of the crowd.

But Serbia supporters soon had something to celebrate with Mitrovic beating Manuel Akanji to head in a 26th-minute equalizer. Vlahovic turned in the box and sent a low shot into the net to put Serbia in front in the 35th.

Embolo evened the score again when he turned in Silvan Widmer’s cross just before the break.

By the time the clock ticked to 45 minutes, Serbia coach Dragan Stojković slouched in the dugout, his face pale and glistening with sweat.

It only got worse at the beginning of the second half.

Argentine referee Fernando Rapallini officiated Friday’s match at Stadium 974. He was also the referee for Switzerland’s penalty shootout win over World Cup champion France in the round of 16 at last year’s European Championship.
CAUGHT COLD

Switzerland goalkeepers Yann Sommer and Philipp Koehn, as well as defender Nico Elvedi, were all unavailable because they were ill. 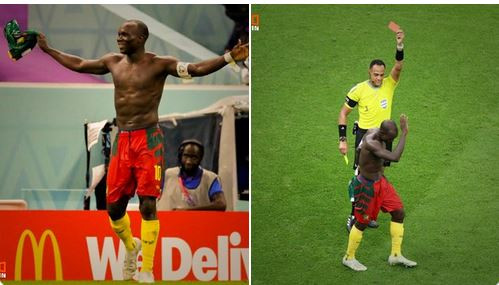