I don't know why he criticizes me so badly- because he's finished! Ronaldo launches attack on Rooney

In an interview with Piers Morgan for TalkTV, released on Sunday, Cristiano Ronaldo spoke about being criticized by former teammate Wayne Rooney.

During a conversation with talkSPORT last week, Rooney criticized Ronaldo for storming out of United’s game against Tottenham in October, walking down the tunnel before the final whistle after he was left on the bench as a substitute.

Ronaldo revealing his thoughts on the comments made by Rooney, the 37-year-old said in an interview with Piers Morgan for TalkTV: “I don’t know why he criticises me so badly... probably because he finished his career and I’m still playing at high level. “I’m not going to say that I’m looking better than him. Which is true."

Rooney recently criticized Ronaldo for his behavior at the club, having notably left a match early because he doesn't have "respect" for manager Erik ten Hag.

“No, I don’t think so," Rooney said when asked on the Alan Brazil Sports Breakfast if Manchester United are a better team with Ronaldo.

“It is a distraction which Manchester United doesn’t need at the minute, trying to rebuild. For Cristiano, just get your head down and work and be ready to play when the manager needs you. If he does that, he will be an asset. If he doesn’t, it will become an unwanted distraction,"

Also in the interview with Piers Morgan Ronaldo was asked whether United’s hierarchy was trying to push him out of the club.

Ronaldo responded that the club has betrayed him and that he is being forced out, while he has no respect for manager Erik ten Hag.

“Yes, not only the coach (Ten Hag), but another two or three guys around the club. I felt betrayed,” he said.

“Yes I feel betrayed, and I felt some people don’t want me here, not just this year, but last year too.”

Ronaldo’s first spell was under former United manager Alex Ferguson, who retired in 2013. The Portuguese said his view of the club is shared by Ferguson.

“The progress was zero since Sir Alex (Ferguson) left, I saw no evolution in the club. Nothing had changed,” Ronaldo said.

“He knows better than anybody that the club is not on the path they deserve to be.

“He knows. Everyone knows. The people who don’t see that… it’s because they don’t want to see, they are blind.”

Ronaldo rejoined United from Juventus for a second spell at Old Trafford in August 2021 on a two-year deal, returning to the club where he won eight major trophies from 2003-2009.

Share this article on social media
Previous article
Man United have betrayed me! Ronaldo says he's being forced out of Old Trafford 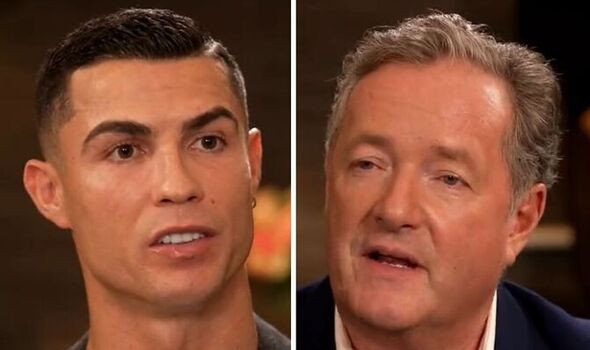