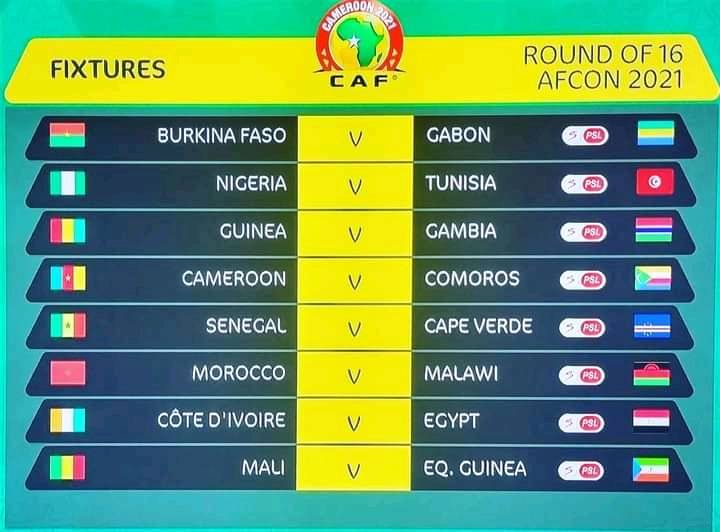 Knockout stage fixtures for the Africa Cup of Nations (AFCON) were confirmed Thursday evening after Tunisia, Gambia, Cote d'Ivoire, Mali and Equatorial Guinea booked their places in the last 16.

Cote d'Ivoire became leaders of Group E after thrashing defending champions, Algeria 3-1 during a tense encounter at the Japoma Stadium in Cameroon's commercial hub of Douala. Equatorial Guinea defeated Sierra Leone 1-0 at the Limbe Omnisport Stadium to finish second. The Leone Stars finish third with two points and Algeria bottom with a point.

In Group F, debutants the Gambia secured second place after making history again by beating Tunisia 1-0 in Limbe. The Eagles of Mali beat Mauritania 2-0 in Douala to top the group. The Carthage Eagles of Tunisia squeezed through as one of the best third-place sides ahead of bottom side Mauritania.

All the top two finishers of the groups and the four best third-placed teams qualified for the knockout round.

The biggest surprises in the group stage included the elimination of African powers Ghana and Algeria. The reigning champions Algeria crashed out in their title defense with just one point, while Ghana failed to reach the knockout round for the first time since 2002.

Interestingly, Comoros and Gambia qualified for the round of 16 on their first-ever appearances at the AFCON tournament.

Hosts Cameroon scored the most goals in the group stage with seven, while Nigeria finished with the most points after winning all three matches.

Knockout stage matches will kick off on Sunday with Burkina Faso facing Gabon in Limbe while Nigeria clash with Tunisia in Garoua.

Cameroon are resolute to lift the trophy but first, they must deal with debutants Comoros on Monday in the capital, Yaounde while Guinea will play against the Gambia on the same day in Bafoussam.

On Tuesday, vice defending champions Senegal will battle it out with Cape Verde in Bafoussam while Morocco lock horns with Malawi in Yaounde.

The last games of the Round of 16 on Wednesday will see a crucial encounter between two giants Cote d'Ivoire and Egypt in Douala while Mali plays against Equatorial Guinea in Limbe.